Noble Energy Inc. continued to sharply reduce well costs in the Lower 48 during the third quarter, while pumping up record oil and gas volumes from the Permian and Denver-Julesburg (DJ) basins. 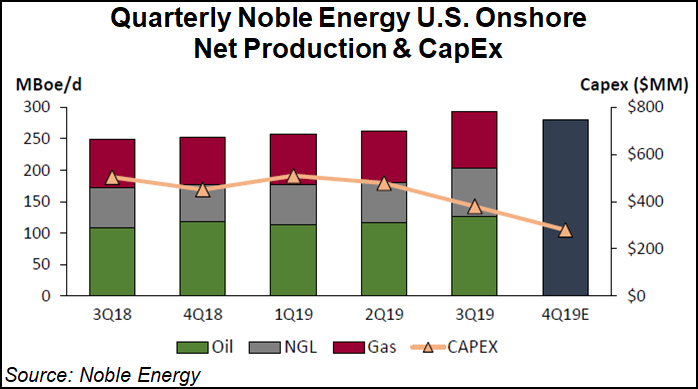 The Houston-based super independent, whose Lower 48 portfolio is stocked with opportunities in the Permian Delaware sub-basin, the DJ and the Eagle Ford Shale, issued its quarterly results on Thursday.

DJ and Delaware well costs fell by another $500,000/well in the quarter and year-to-date are down by more than $2 million/well from year-end 2018 costs. Meanwhile, domestic onshore volumes climbed sequentially by 30,000 boe/d, with the DJ and Delaware each hitting records.

This year, Noble has “significantly lowered the capital and cost intensity of our business through continuous improvement initiatives. This is reflected in a $200 million reduction in our 2019 capital expenditures from the original plan, which we are prioritizing for the balance sheet rather than additional growth.” Noble also delivered a 5%-plus reduction in operating and general/administrative costs versus the 2019 plan.

Included in the DJ report was a record well drilled in under 24 hours with a 10,308-foot lateral. The company also used its first electric-powered drilling rig in the Mustang area, which is expected to reduce emissions by 130 tons/year, while also reducing noise and fuel costs.

Following on the success of the Mustang Comprehensive Drilling Plan (CDP) in the DJ, the company has submitted for Colorado regulatory approval its North Wells Ranch CDP, which would cover 38,000 net acres and provide up to 250 additional permits.

Delaware volumes, meanwhile, jumped 21% from a year ago to 70,000 boe/d. The company brought online its second full section row development project, a nine-well development in the central portion of its acreage. Drilling days were reduced to an average of 17 days, while pressure pump hours/day trended higher, averaging 13 hours/day.

During the third quarter, the company also began transporting Permian oil volumes to the Gulf Coast on the Epic Y-Grade Pipeline, which is being used temporarily until an oil pipeline is completed.

In the Eagle Ford, third quarter volumes totaled 65,000 boe/d. Base production in the last half of this year has been impacted by unplanned facility repairs, which began in September and were completed in late October. The impact to production for each quarter is around 5,000 boe/d, Noble said.

Volumes from the DJ are anticipated to increase slightly in the final three months of the year, while the Delaware should remain flat from 3Q2019, management said. Eagle Ford production is anticipated to be lower primarily as a result of base production decline, with 4Q2019 output negatively impacted by unplanned facility maintenance.

In other news for the quarter, the Noble-led Leviathan natural gas project offshore Israel is expected to begin service in December. Sales volumes from the Leviathan and Tamar fields totaled 234 MMcfe/d. During the quarter, the Tamar field reached a milestone of 2 Tcf, with runtime of 99%-plus since startup, management noted. And in West Africa, sales volumes averaged 53,000 boe/d in 3Q2019, with the Aseng field surpassing 100 million bbl of oil produced.