U.S. oil and gas permitting across the board showed solid growth in the first three months of the year, with the Denver-Julesburg (DJ)/Niobrara and Powder River Basin together surpassing the mighty Permian Basin, according to data compiled by Evercore ISI. 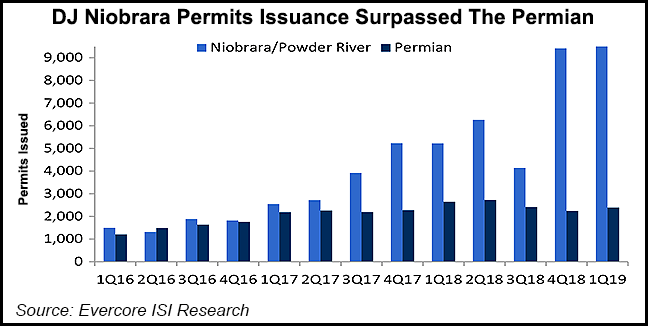 The quarter overall was a strong one for Lower 48 permitting, Evercore data revealed in its analysis of state and federal permit data. The trend for more permits continued during the first week of April, with activity up 29% from the final week of March to 1,301 permits.

“Consistent with the upward move in oil prices, we observed strong permitting activity in the quarter given the high permit issuance for drilling in the Niobrara and the Permian Basin,” Evercore analyst James West said of first quarter activity. Total permits issued during 1Q2019 totaled 17,464, up 80% year/year.

The solid trendline upward continued into early April, with permitting in the Lower 48 during the first week of April indicating the DJ/Niobrara remained the strongest area, “picking up 839 (314 permits week/week),” said West.

“Niobrara permits are turning into a leading indicator of U.S. onshore permit activity.” The formation “has been a driver of growth of U.S. permitting, and it surpassed significantly the Permian as of 3Q2017,” according to the tally.

Although there was a sharp decline in U.S. permits during 3Q2018 because of a slowdown in the Niobrara and the Permian, a recovery followed in the final three months of last year, driven by permits issued in Wyoming and Colorado.

The new year got off to a strong start, although total U.S. permitting slowed in February, West said.

“March has been positive as permits issuance has rebounded in the DJ Niobrara, alongside the healthy increase in the Haynesville,” with Permian permitting higher than February levels.

March permits in Wyoming surged to 3,535, up 1,802 month/month. Colorado permits increased to 556, 183 more than in February, and Montana recorded a gain of nine permits month/month to 12.

DJ/Niobrara gas and oil production is on the rise, according to the Energy Information Administration’s most recent Drilling Productivity Report. Gas production is expected to increase to 5.48 Bcf/d in April from 5.41 Bcf/d in March, with oil output climbing to 753,000 b/d from 732,000 b/d.

Onshore wells spudded during the final week of March totaled 374, according to Evercore. Unconventional oil wells bounced back with an increase in the Bakken and Eagle Ford shales. On the natural gas side, wells spudded horizontally peaked in March, with the Marcellus on top.

Meanwhile, Gulf of Mexico (GOM) permitting continued to show gains during March, with new well permits rising to 13, up by 10 from February.

There was “midwater permit accretion,” according to Evercore, as a BP plc unit received eight permits. In addition, W&T Offshore and Fieldwood Energy LLC each received one permit. Chevron Corp. received the only deepwater permit issued in March, and there were no ultra-deepwater permits filed.

Sidetrack-approved projects in the GOM remained flat in March month/month at seven, while bypass permits edged up to five, three higher than in February. Drilling plans for the GOM declined to six from 16 in February.