Heeding industry pleas from a subcommittee hearing earlier this month (see Daily GPI, Dec. 5), Congress on Tuesday extended tax credits for natural gas vehicles (NGV) that expired at the end of last year, reversing the defeat earlier in the year of a bipartisan bill from the U.S. Senate that was rejected by the House. 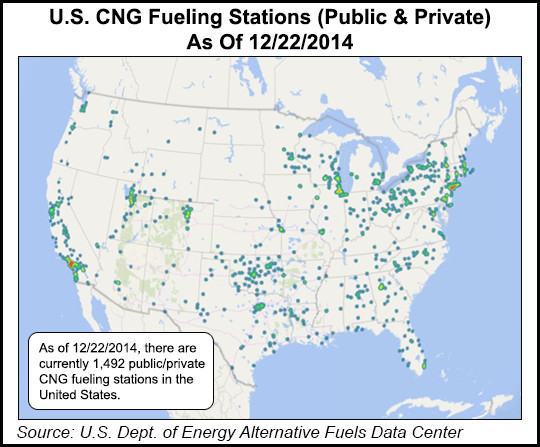 NGVAmerica President Matthew Godlewski called the congressional action in the Tax Increase Prevention Act (HR 5771) “the most significant NGV legislation passed by Congress in some time,” adding that it should help the expansion of the use of natural gas in mainstream transportation.

Sen. Jim Inhofe (R-OK) was a co-sponsor of the measure lowering the corporate average fuel economy (CAFE) credits for NGVs from 200 to 150 miles and extending the tax breaks for alternative fuel vehicles. Inhofe called the measures job creators for his natural gas-producing state.

NGVAmerica said the incentives are important because they will help businesses “more quickly offset the higher upfront costs of NGVs, and they reward investments in NGV fueling infrastructure.” However, Godlewski said Congress failed to rectify what the NGV sector sees as an inequity for liquefied natural gas (LNG) used in transportation: taxation at a higher rate than diesel fuel.

Separately, Anheuser-Busch (A-B) announced its ongoing effort to transfer its Houston-based fleet to operate on CNG or LNG during a webinar for fleet operators, featuring Billy Lawder, A-B director of transportation engineering; and Jeff Campbell, marketing director at Cummins Westport.

Lawder, who has been a catalyst for the brewer and one of the nation’s largest consumer products suppliers switching to NGVs, said A-B makes more than 1 million shipments annually to 13 breweries, four warehouses and 700 wholesalers. From its St. Louis headquarters alone, A-B ships 400-500 truckloads to 500-600 locations daily, he said.

In response to questions, Campbell said there are new engines coming for smaller 9-liter and under engines used in school buses and shuttles, but production of the long-anticipated 15-liter engine is still on hold (see Daily GPI, Jan. 14).

Elsewhere, Michigan-based REL Inc. and Michigan Tech have been awarded a $2.1 million grant from Houston-based natural gas producer Southwestern Energy for a three-year project to come up with a space-saving approach to CNG fuel tanks. Southwestern is seeking options to the current design of putting CNG fuel tanks in the beds of pickups where they present a drawback to consumers because they take up too much space.

Under the grant, an interdisciplinary team of Michigan Tech researchers and REL engineers is working to design, fabricate and test a comformable CNG tank for light-duty trucks. This means coming up with a tank design that fits with existing vehicle components, withstands the pressure of CNG and can be inexpensively fabricated, the researchers said.

Fuel will be supplied by NuBlu Innovations, which has acquired 13 Orca mobile LNG units from Chart Industries. Initially, NuBlu will purchase LNG supplies for Pass Box and other customers, and eventually it plans to open its own 60,000 gallon/d liquefaction facility outside Monahans, TX, west of Midland, in the first quarter of 2016.