Ellen Beswick Steis, who founded Natural Gas Intelligence almost 40 years ago, and who was the Editor and Publisher Emeritus, died on Christmas Eve following an illness. She was 79. 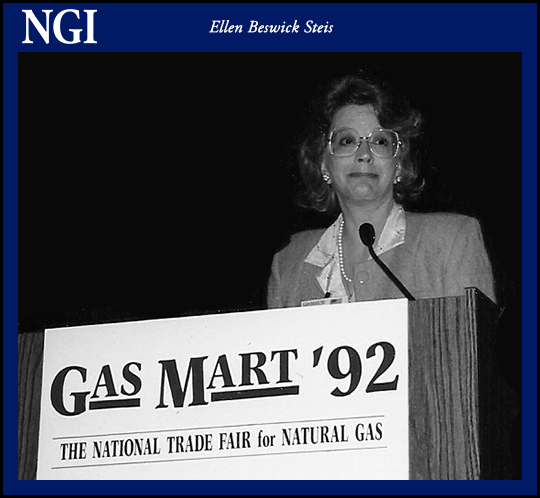 An astute leader with a brilliant and active mind, the working journalist in the early 1980s eyed an opportunity as the nascent U.S. natural gas industry began to develop. From her kitchen table, Ellen in 1983 published the industry’s first U.S. natural gas price survey report. NGI then went on to achieve benchmark status in several U.S. natural gas trading hubs.

Since her visionary idea, NGI has grown to include a roster of news, pricing and data services for the Americas, Europe and Asia markets.

As the U.S. unconventional natural gas drilling frenzy began in the mid-2000s, Ellen spotted another opportunity and founded NGI’s Shale Daily, which debuted in 2010. When Mexico reformed its energy markets, another service, NGI’s Mexico Gas Price Index, made its debut in 2017.

And this year, with growing exports overseas of Made in America natural gas, NGI’s LNG Insight debuted three months ago.

Today, NGI employs full-time editors and journalists working in Virginia, Houston, Pittsburgh, Los Angeles, Mexico City, Calgary and Santiago, as well as a team of expert analysts and researchers based in Virginia and New York City.

“In 1981, Ellen identified the North American natural gas market as an underreported on industry, which was on the doorstep of deregulation,” said NGI’s Alex Steis, Editor-in-Chief, and Ellen’s son. “After talking to a number of her longtime sources, she realized the industry had a lot more questions than answers following the Natural Gas Policy Act of 1978, so she set out to find those answers, and NGI was born. Ellen was a supportive, loving and dedicated mother and grandmother, AND a dogged journalist. They really don’t make them like that anymore.”

Before founding NGI, Ellen was an associate editor for London Oil Reports. She also formerly worked as a general and political reporter for United Press International, the Boston Herald and American Metal Markets. Ellen received a bachelor of arts degree in English from Wilson College in Chambersburg, PA. She was a founding member of the Women’s Press Club in Washington, DC, and one of the first female members of the Washington Press Club.

When not toiling away at the office, Ellen reveled in her garden. She loved butterflies, birds, dogs, and an occasional scotch. In recent years, her favorite activity was cheerleading for her four grandchildren at soccer games and dance recitals.

NGI employees, who are treated like family, are mentored, bolstered and encouraged to live their best lives, to do their best work and to understand that family comes first, values instilled by Ellen.

Travel was a particular delight for Ellen. When she was 60, she and a girlfriend went on a trip to Patagonia where she met her husband, John Hill. Together, they traveled the globe, with Portugal a favorite destination in recent years.

Her address book was deep, carrying the names of friends from high school and college, and Ellen in recent years still ventured to school reunions and on outings with friends.

Many of Ellen’s colleagues remember her fondly for her professionalism and dogged determination.

“I was greatly saddened to learn that Ellen had passed away,” said Donald Santa, president of the Interstate Natural Gas Association of America. “Ellen was an early leader in covering the dramatic transformation of our nation’s natural gas market.  Her founding of Natural Gas Intelligence in 1981 coincided with the beginnings of the industry’s restructuring.

“Throughout the following decades, Ellen and NGI provided insightful reporting and analysis of the events and trends that shaped the natural gas industry and the competitive commodity market for natural gas.

“It’s also important to appreciate Ellen’s pioneering role as a female journalist covering our industry. She paved the way for many who followed in her footsteps,” Santa said.

RBN Energy LLC founder Rusty Braziel remembered Ellen for her ability to bring people in the natural gas industry together.

Veteran energy analyst and consultant Ben Schlesinger of Benjamin Schlesinger and Associates LLC said it was sad to hear of her death.

“Ellen was decent, brave and brilliant,’ Schlesinger said. “She was a pioneer. In fact, Ellen was the consummate ‘Little Red Hen’ because she did it herself when nobody else would.

“Basically the first market publisher in the modern natural gas era, Ellen was the first to report actual market prices for gas —  first anywhere in the world,” Schlesinger said. “In the early 1980s, this was a very big deal in a world where arcane economic information extracted through deep, boring, costly analysis was up until then required to do the same.

“Ellen was also a pioneering woman in energy and in publishing per se, paving the way for countless women and men who followed, resulting in a more open and economically sound energy industry.  Plus what a great, lovely person.  Farewell and thanks, dear Ellen — we will miss you a lot.”

Larry Foster, formerly editorial director of natural gas and power for Platts, remembered meeting Ellen shortly after he began at Inside FERC in 1980. “At the time there wasn’t much press coverage of FERC, and what existed, such as Foster Report, was pretty tame and nonaggressive. This experienced reporter showed up and announced that she was starting a new publication covering FERC and the gas industry, and there was a sense of ‘Wow. Who is this person?’ A single mom with two young boys, covering a very male-dominated industry with a direct style. I admired her drive and spunk from the start, even though I viewed her as a strong competitor.

“I picture Ellen with a drink in one hand, a cigarette in the other and a notepad and pen at the ready. She was a journalistic throwback, in a good way,” Foster said.

Calgary-based energy journalist Gordon Jaremko, a long-time author and a member of the Canadian Petroleum Hall of Fame, has contributed to NGI since 1986.

“Ever since I started filing freelance pieces to NGI during its early times in the 1980s, I have been impressed with Ellen’s consistent competence and North America-wide understanding of her field of professional engagement,” Jaremko said. “The survival of her publishing labor of love, while so many other news and information sources have failed, stands out as a monument to her talent.

“For her associates she was a great supporter, mentor and friend,” he said. “The publication’s survival in the hands of her family confirms she bred ability into her heirs. She will be missed and remembered.”

Husband John Hill survives Ellen, as do her sons Dexter Steis and Alexander Steis, who will continue to run NGI.

Services are scheduled for 2 p.m. Saturday, Jan. 4 at the Adams-Green Funeral Home in Herndon, VA.

In lieu of flowers, the family’s wishes are for contributions to be made to Doctors Without Borders in Ellen’s name.