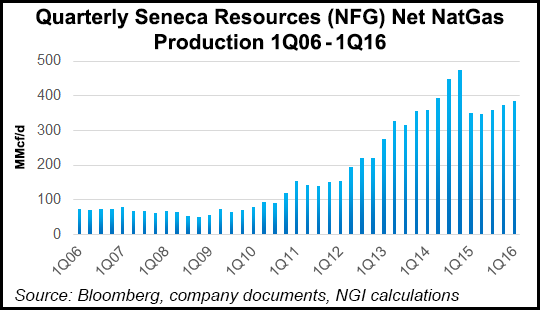 The exploration and production subsidiary Seneca Resources Corp. plodded forward during the quarter after significantly reducing its operational activity at the beginning of FY2016, which began in October. Commodity prices were 18% lower during the period than they were a year ago, forcing the company to voluntarily curtail 9.1 Bcf of production in Pennsylvania.

The company started the year with three drilling rigs, but has since dropped to one, COO John McGinnis said. He said the company would keep the rig active for the remainder of the year to build an inventory of drilled but uncompleted wells to fill its Northern Access 2017 pipeline, which is scheduled to begin service in late 2017. The project was initially expected to be operational this year, but the startup date was delayed on its reduced activity. Northern Access would expand the NFG Supply Corp. and Empire Pipeline systems to transport more than 490,000 Dth/d from Seneca-operated wells in Northwest Pennsylvania to multiple markets in the Northeast.

Even with a reduction in activity and curtailments, Seneca produced 39.2 Bcfe, up 9.7% from the year-ago period and up 3% from 1Q2016. Most of the production came from Pennsylvania, where the company produced 34.9 Bcf. The gas production increase was primarily the result of new transportation capacity that came online with the company’s Northern Access 2015 pipeline project, which moves 140,000 Dth/d from the company’s Western Development Area (WDA) in Northwest Pennsylvania to Canada. Legacy oil assets in California produced 723,000 bbl, roughly flat compared with a year ago.

McGinnis said the company drilled its first Utica Shale well in the WDA, which encompasses Pennsylvania’s Elk, McKean and Cameron counties. The well, which cost more than $7 million, was drilled with a 4,500 foot lateral. Once Seneca completes the other 10 Marcellus wells on the pad, the company plans to test the Utica well this summer.

Weather across NFG’s service territory in Pennsylvania and New York was 12% warmer than normal and more than 26% warmer than the year-ago period, which drove down earnings at the utility segment to $32 million from $38.2 million in the year-ago period. The company’s utility segment typically pushes up its consolidated earnings, which were also dented by low commodity prices.

NFG and its subsidiaries reported a net loss of $147.7 million (minus $1.74/share), compared with net income of $16.7 million (20 cents) in 2Q2015. Revenue declined to $449.1 million from $596.1 in the year-ago period. The net quarterly loss was partly the result of a $230.5 million impairment of oil and gas properties. The company expects to record similar impairments for the remainder of the year and possibly in the beginning of FY2017.