In a move that should further boost Appalachian export capacity to Midwest markets in time for winter, FERC on Wednesday authorized the greenfield 1.5 Bcf/d Nexus Gas Transmission pipeline to begin service. 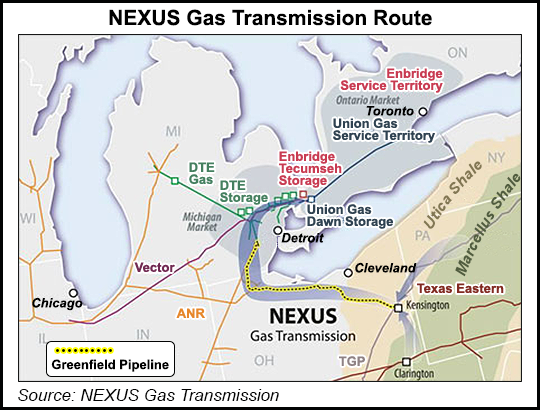 The approved facilities — including the 257.5 mile, 36-inch diameter greenfield Mainline Pipeline, the 52,000 hp Hanoverton Compressor Station in Columbiana County, OH, and various metering and regulating facilities in Ohio — were mechanically complete as of late last month, according to Nexus.

Like other recent Appalachian pipeline construction projects, Nexus has had to contend with heavy rains in the region recently that have made restoration work more difficult. Analysts had suggested that the adverse weather conditions contributed to delays to in-service authorizations for projects including Nexus, Atlantic Sunrise and WB XPress.

Nexus, previously slated to enter service in November 2017, also experienced a significant delay due to last year’s quorumless stretch at FERC after the project was left out of a series of last-minute Commission decrees prior to the departure of former Chairman Norman Bay.

Backed by Enbridge Inc. and DTE Energy Co., Nexus has also faced pushback from landowners and from Michigan regulators, who scrutinized DTE’s capacity commitments to the project.

Nexus will compete with the 3.25 Bcf/d Rover Pipeline to serve an Appalachian producing region that has looked significantly less congested recently amid a wave of new infrastructure projects hitting the market. Dominion South — save for some spot price weakness last month — has generally traded much closer to benchmark Henry Hub this year than in recent years.

Genscape Inc. analyst Colette Breshears recently told NGI that the incremental Nexus capacity is not expected to have as much of an immediate market impact as the recent start-up of the greenfield portions of the 1.7 Bcf/d Atlantic Sunrise expansion to serve more congested areas in Northeast Pennsylvania.

“Nexus serves an area” of the Marcellus and Utica shales in the southern part of the basin that already has a “large amount of export capacity,” limiting the potential impact for producers, Breshears said. Still, “the addition of a new route from Clarington, OH, to the Michigan market area will be welcome.”