After a decade of divided authority blamed for approval delays, Canada’s offshore oil and gas watchdog agency has regained full power over sea-floor exploration on the resource-rich Grand Banks of Newfoundland.

A new regulation transfers jurisdiction over environmental aspects of ocean drilling back to the Canada-Newfoundland and Labrador Offshore Petroleum Board (CNLOPB) in St. John’s from the Impact Assessment Agency of Canada (IAAC) in Ottawa.

Average environmental assessment periods for offshore wells stayed far brisker at 18 days in the UK, 79 days in Norway, 96 days for U.S. waters in the Gulf of Mexico, and 144 days in Australia, showed the CAPP research. 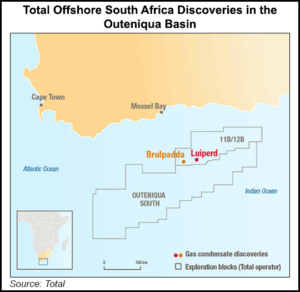 Total SA has made a second significant gas condensate discovery offshore South Africa, management at the French major said Wednesday. The latest discovery is in the Luiperd prospect, in Block 11B/12B in the Outeniqua Basin, 175 kilometers (109 miles) off the southern coast of South Africa. The Luiperd well was drilled to a depth of…