A coalition of New York landowners that supports natural gas development filed a lawsuit Friday in the state Supreme Court against Gov. Andrew Cuomo, the state departments of Environmental Conservation (DEC) and Health (DOH) and their respective commissioners over delays in considering high-volume hydraulic fracturing (HVHF). 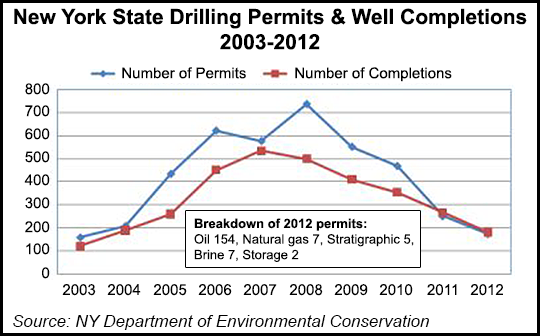 The Joint Landowners Coalition of New York Inc. (JLCNY) filed suit against Cuomo, DEC and DOH on behalf of its 70,000 members, as well as the Kark Family Trust, LADTM LLC, and Schaefer Timber & Stone LLC, landowners whose properties were issued HVHF drilling permits but have been unable to proceed with development.

In court papers filed Friday, JLCNY attorney Scott Kurkoski said the DEC had failed to complete its non-discretionary duty to complete the SGEIS; had failed to meet the deadlines set forth in the State Environmental Quality Review Act (SEQRA); and had run afoul of the state’s official energy policy.

“The DEC has further failed to promote the development of indigenous oil and gas development as required by the energy law,” Kurkoski, an attorney with the Binghamton, NY, firm Levene Gouldin & Thompson LLP, said. He added that Martens’ decision to refer to Shah for a review “was an arbitrary and capricious action, an abuse of discretion, and in direct violation of the DEC’s responsibilities as lead agency under SEQRA.

Twenty-three percent of respondents agreed that Cuomo was “carefully evaluating” the issue of hydraulic fracturing (fracking), but 35% opined that the Democratic governor was “dragging his feet” on the issue. Another 37% had no opinion.

JLCNY said the latest Quinnipiac poll “underscores an important dichotomy — that even though Upstate voters are consistently in support of developing natural gas in their own region, the unsupportive views of respondents from New York City continue to disproportionately affect the rights of Upstaters.

“The irony, of course, is that New York City has the cleanest air it has seen in 50 years, largely due to the increased use of natural gas to replace other heating fuels. This is the ultimate NIMBY sentiment and a prolongation of Upstate views having no will in their own domain.”

Quinnipiac surveyed 1,488 registered voters in New York between Feb. 6 and 10. The poll has a margin of error of plus/minus 2.5%.