“With more of a push to decarbonize the U.S., combined with more demand from Mexico for natural gas in the short and mid-term, we are going to continue to see increased dependence on U.S. natural gas in Mexico,” Leonardo Beltrán, a seasoned expert in Mexico energy policy, told NGI’s Mexico Gas Price Index. 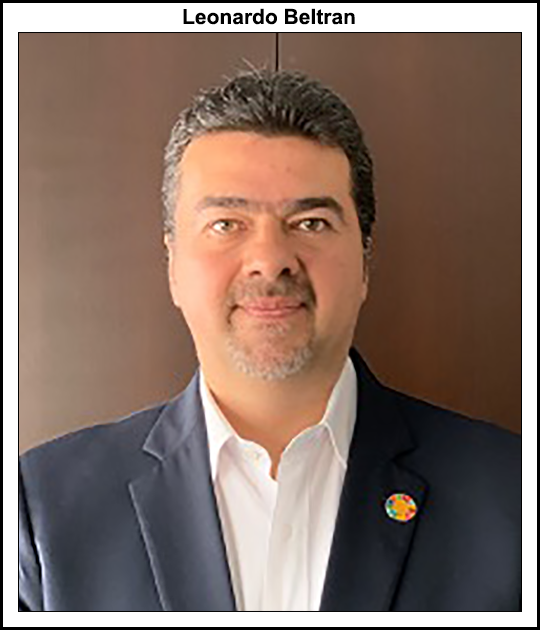 “The change in administration in the U.S. is going to favor cleaner fuels, and in that regard, natural gas is the cleanest of the fossil fuels. This means that natural gas will likely continue to be favored over other commodities,” he said.

Beltrán, who was the Deputy Secretary for Planning and Energy Transition at the Mexican Energy Ministry (Sener) from 2012-2018, is the 46th expert to participate in the ongoing question-and-answer (Q&A) series about the Mexican energy industry. He spent 13 years at Sener, starting as the Director for International Negotiations in 2005 overseeing the relationship between the Energy Ministry and Asia-Pacific, European and North American countries, and later as the Director-General for Information and Energy Studies from April 2010 through March 2012.

Currently, Beltrán is a member of the Boards of Sustainable Energy for All, Fundacion Por México, the World Economic Forum’s Project in Partnership to Accelerate Sustainable Energy Innovation, a consultant to the Inter-American Development Bank, the World Bank, the Latin American Energy Organization, and a Non-Resident Fellow at the Institute of the Americas and at the School of Public Policy of the University of Calgary. He holds a bachelor’s degree in economics from the Instituto Tecnologico Autonomo de Mexico (ITAM), a law degree from the National Autonomous University of Mexico (UNAM), and a master’s degree in Public Administration in International Development from the Harvard Kennedy School.

NGI: In late December, Sener approved a new set of rules for the import and export of fuels to and from Mexico. What are your thoughts on these rules and what do they mean for the Mexican energy industry?

Beltrán: In general, any regulatory change has an impact on the sector. So, if you change the rules of the game, that will obviously generate some conflict in the regulated sector.

In this case, I understand that the time frames for existing import and export permits are being reduced, which of course has a direct effect on the regulated companies. That obviously doesn’t favor the investment climate in Mexico, particularly for the companies and actors that already had approved permits.

For new entrants in the market, they will have to adjust to these new rules, but given that the energy sector is one of long-term investments and infrastructure projects, hopefully the new short-term measures aren’t disruptive enough to make the market less attractive for investment.

NGI: You mentioned changes to the rules of the game, which many experts consider to be the biggest concern in the Mexican energy industry currently. What are your thoughts on the wave of recent regulatory changes in Mexico?

Beltrán: First of all, it isn’t a good sign because what it signals is that there will be tension between those being regulated and the regulatory bodies. Instead of having a more fluid relationship between the regulated companies and the regulator, you’re going to have to request the intervention of a third-party — which in this case is a judicial authority — so that the regulated parties can voice their concerns, which have to be reviewed under the rules of the law.

This, of course, generates more costs to be paid, both for the regulated parties and the regulator. To take the issue to a court or to a legal body for judgment generates more cost and more controversy. This obviously makes for a more difficult environment at a time when we are experiencing both a health crisis and an economic crisis as a result of the pandemic.

NGI: Another event that rattled the energy sector at the end of last month was the massive power outage on Dec. 28 where millions of citizens lost electricity. What are your thoughts on the blackout and what does it indicate in terms of Mexico’s energy security?

Beltrán: I think it is a symptom of the current state of the electricity system. In general, the investments in the transmission grid have been limited. There has been much more investment in electricity generation than in transmission.

The blackout was simply the materialization of these issues and the system itself sending the message that it hasn’t properly been maintained and needs help. It is the system saying to the operators that it needs better care and more attention. I think the signal couldn’t be clearer that this year there must be more investment in the transmission system of the country.

The agenda for this year has to include the strengthening of the country’s transmission and distribution infrastructure. And, this is obviously a necessary condition to be able to contribute to the energy security of Mexico.

It’s also important to note that this isn’t a Mexico-exclusive issue. Many countries have similar issues with their transmission networks, and perhaps the most atypical case is in China. They have been investing a tremendous amount in the development of transmission infrastructure, precisely in preparation for new clean energy generation.

If you look at the U.S. or Europe or Latin America and the Caribbean, the challenge that most are facing currently is that transmission infrastructure has been largely overlooked and forgotten. Many countries haven’t addressed the needs to maintain and strengthen their transmission grids to accommodate for growth and new methods of energy generation.

NGI: In regards to renewable energy in Mexico, there are signs in the sector that clean energy companies might consider closing operations here or halting investment in the country as a result of recent government rule changes. What do you expect for the renewable energy industry in Mexico in the upcoming years?

Beltrán: I think that nationally, there are two elements that these companies are facing. The first is of course the case of the Comisión Federal de Electricidad (CFE), where much of the team that is now heading the company is more accustomed to working with conventional and fossil fuels. As a result, it is much easier for parties involved in conventional fuels to work with the team at CFE. At the same time, there is pressure from the private sector to develop new clean energy generation, which is more efficient and competitive. So, you have these two contrasting elements happening at the same time in the market.

It is not surprising that CFE wants to maintain their power in the market, which is what any dominant company would try to do. Just because they are the state entity doesn’t mean they shouldn’t act like any other company in the market. On the contrary. The CFE is using all of its available instruments to be able to continue to be the most powerful player in the market.

The fact is that, in the current Mexican energy market, clean alternatives and technologies are becoming more competitive than the…types of energy sources that have traditionally been developed. And they are being met with a resistance to change.

Additionally, there are other factors that are exerting internal pressures, which are coming from the international push to move away from traditional fuels as a measure to slow the impacts of climate change. Currently, the large majority of countries in the world are turning towards a model of sustainability and trying to reach decarbonization goals as soon as 2030 or 2050.

With the results of the presidential elections in the U.S., it is expected that the U.S. will also now have a more relevant role in this transition and accelerate its push to reduce emissions and combat climate change. That is obviously going to continue affecting the market share of conventional and fossil fuels.

And finally, another element is that governments are starting to adopt regulation to limit the role of traditional fuels in electricity generation and for other uses, such as in the transportation sector. The transportation sector is currently the first or second contributor to greenhouse gases in the world, and governments are placing restrictions on continued use of vehicles that require internal combustion, which will reduce the demand for hydrocarbons.

So, currently there are a number of pressures – technological, regulatory, environmental, international and social – that challenge the current energy model of the CFE. And it seems that discussions about how to carry out a just transition in Mexico would be very valuable.

Beltrán: I think there are two relevant elements to consider. First is national demand. Currently, there isn’t a local supply alternative to meet that demand, and so external flow is required. That is going to continue to be the case in the short, mid and possibly the long-term as well. Without question, in the short or mid-term, Mexico’s needs and demand for natural gas cannot be met using only national supply.

NGI: What do you expect in this new year for the Mexican energy industry, and what challenges and opportunities lie ahead?

It appears the current administration has identified the lack of transmission infrastructure as a bottleneck that has to be improved to improve the reliability of the electricity system. So, that is a challenge as well as a great opportunity to generate investment. The preference of the current administration is to develop the public sector, but given that the extraordinary amounts of investment required aren’t available, that opens a possibility to develop opportunities for public and private participation. I think that is probably what will be observed this year and in the following 3-4 years.

Another relevant theme is that of fuels storage. On an international level, we are starting to see very competitive prices for storage. Mexico has recently discovered the investment opportunities that exist if more storage technology is developed. So, another area for opportunity and investment is the continued development of storage options in Mexico.