Pennsylvania regulators are moving ahead with regulations for conventional oil and natural gas producers, with tentative plans to unveil the rulemaking package next year as legislative efforts continue to fail. 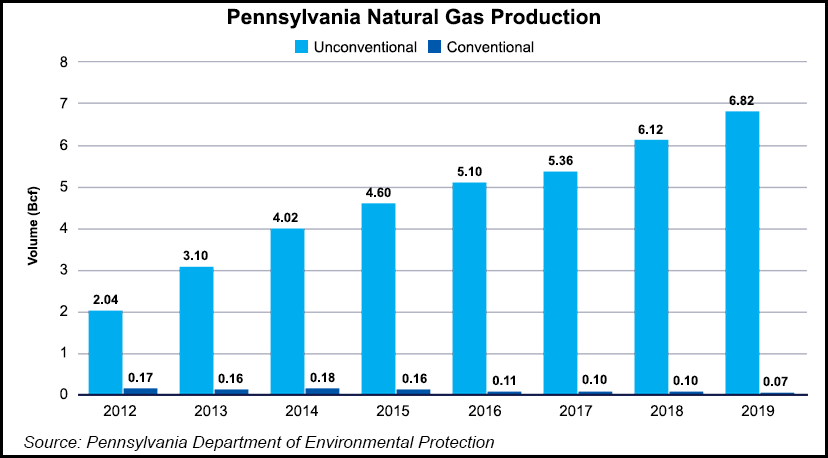 The Republican-controlled general assembly sent another bill last week to establish regulations for legacy exploration and production (E&P) operators to Democratic Gov. Tom Wolf, who is expected to veto it. Senate Bill (SB) 790 “does not adequately protect the environment and the public health and safety of the citizens of the commonwealth and would contribute to a legacy of environmental degradation,” Wolf’s Deputy Press Secretary Elizabeth Rementer told NGI’s Shale Daily.

Sponsored by Senate President Pro Tempore Joe Scarnati, SB 790 would relax well integrity, water protection, plugging, bonding and spill reporting requirements in an effort to ease the regulatory burden of the conventional E&Ps, which have developed shallower formations in the state for more than 150 years. Legacy operators have been hit particularly hard by low commodity prices in recent years as larger independents working unconventional formations have flooded the market with oil and gas.

SB 790 follows legislation passed in 2016 in which Wolf’s administration and the general assembly struck a compromise to move regulations for unconventional E&Ps forward and simultaneously scrap others written for legacy producers. The rules took years to write, but smaller E&Ps accused the DEP of writing ambiguous and similar regulations for two different industries.

Legacy producers mostly operate under the Oil and Gas Act of 1984. However, parts of Act 13, which was passed in 2012 to better regulate unconventional development, apply to conventional operations. Those regulations have “placed additional burdens” on the industry, Scarnati said in a memo circulated for SB 790. The DEP and dozens of environmental groups have staunchly opposed relaxing regulations for smaller E&Ps with SB 790.

The DEP has been meeting with CDAC over the last four years. It turned its focus in 2018 and 2019 to helping craft legislative language to address challenges facing conventional producers, but the agency said those efforts have failed to move forward, leaving it to craft regulations through the rulemaking process.