New horizontal drilling and hydraulic fracturing technology has made a big difference in production from new wells, the Energy Information Administration reported this week. 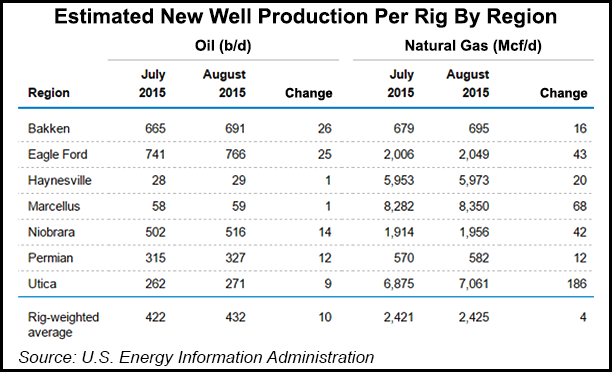 The Drilling Productivity Report (DPR) issued on Monday, offered EIA’s estimates of new well production gains expected between July and August in each of the seven biggest unconventional plays in the United States: the Bakken, Eagle Ford, Haynesville, Marcellus and Utica shales, Niobrara formation and Permian Basin. The seven regions during 2011-2013 accounted for all domestic gas production growth and 95% of the oil output growth.

Even though the total rig count is down sharply, each new gas well should pump about 4 Mcf/d more between July and August, the DPR estimated. New-well oil output overall should average 10 b/d higher month/month.

The biggest average gas well output gains are seen in the Utica, rising by 186 Mcf/d to 7,061 Mcf/d. Its sister Marcellus should average 68 Mcf/d more gas from each new well/rig, or on average 8,350 Mcf/d.

New gas wells in the Haynesville should produce 20 Mcf/d more per rig from July to average 5,973 Mcf/d, while Eagle Ford output is seen rising by 43 Mcf/d to 2,049 Mcf/d. In the Niobrara, gas production from each new well/rig is forecast to increase by 42 Mcf/d to 1,956 Mcf/d.

In the Bakken, gas production from each new well should increase on average by 16 Mcf/d to 695 Mcf/d between July and August, the DPR said. The Permian Basin’s new gas wells also are forecast to see a 12 Mcf/d gain to average 582 Mcf/d.

Onshore oil output from new wells also is seen on the rise, the DPR indicated, with the biggest overall gains seen in the Bakken, where output is set to rise by 26 b/d month/month to 691 b/d. The Eagle Ford follows, with 25 b/d more from each new oil well to average 766 b/d. Niobrara oil output should increase from July to August by 14 b/d to average 516 b/d.

In the Permian, new oil wells are expected to pull out another 12 b/d between July and August to average 327 b/d, while in the Utica, an increase of 9 b/d should bring the average new oil well output to 271 b/d.

The DPR for July also indicated that onshore gas production would be higher in August (see Shale Daily, July 14). However, marketed gas output now is set to expand at a slower rate this year, up 5.7% to a record of 78.97 Bcf/d, versus a 6.2% increase in 2014.