New Mexico’s Permian Basin has feathered the state’s coffers and built the nation’s oil reserves, but if the Biden administration implements a ban of federal permitting, the region’s economy could take a sharp hit, according to the Federal Reserve Bank of Dallas. 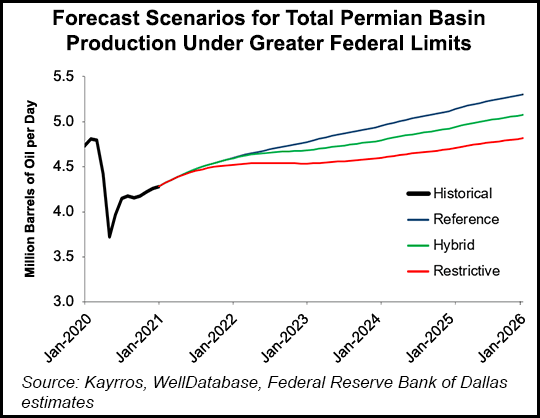 The Biden administration in late January directed the Department of the Interior to pause for two months all new oil and natural gas permitting on federal lands and offshore waters. The order is a “targeted pause,” which basically does not impact existing operations/permits for valid leases, nor does it  restrict activity on private or state lands.

For New Mexico, it’s all in the details as about half of its Permian production is on federal land, according to the Dallas Fed, as it is known. A permanent pause on federal leases would lead to a “realignment” with Permian operators in Texas, where operators work on lands nearly all private or state controlled.

By the end of 2025, the Permian could produce “between 230,000 and 490,000 b/d less than if drilling activity continued at its current pace,” the economists said. “As a result, production and employment across the basin will gradually shift from federal lands in New Mexico to private and state lands in New Mexico and Texas, with wide ranging economic implications for the region.

In 2020, the Texas Permian produced an estimated 3.3 million b/d of oil, while the New Mexico portion pumped 1.0 million b/d.

Historically, federal leases are given for 10-year periods, and operators receive drilling permits from the federal government. Permits are valid for two years, but if they are unused, leaseholders historically have been able to obtain two-year extensions.

Golding and Patel considered two scenarios and a reference scenario to evaluate the impacts of potential policies in the Permian using an average West Texas Intermediate oil price of $50/bbl.

The benchmark reference case assumes few changes in leasing, permitting and drilling from levels in 1Q2021.

Another scenario, the “hybrid” case assumes that no new federal leasing is allowed, but existing leaseholders continue to receive drilling permits.

“Permit reviews are more rigorous, leading to slower approvals and a costlier operating environment beginning in 2022,” said Golding and Patel of the hybrid scenario. “Based on companies’ public statements, firms that hold acreage across the basin gradually relocate drilling rigs and completion crews to their nonfederal locations.”

A “restrictive” case also was analyzed in which no new federal permits or extensions were granted starting in 2023.

“This is when the most recently issued permits will expire,” the economists noted. “The existing permitting freeze adversely affects production in the near-term due to a lack of approvals of permit modifications and pipeline rights-of-way. As in the hybrid case, companies shift their focus to nonfederal acreage.”

“With an expected shift in drilling from federal acreage, employment moves across state borders from New Mexico to Texas,” said Golding and Patel.

However, the financial impacts could go well beyond moving equipment.

“We assume that a standard three-well pad on average requires 240 workers,” the economists said. “In the hybrid and restrictive cases, between 3,500 and 6,600 drilling and completions workers will not be needed in New Mexico from now through year-end 2025, while Texas will require between 5,400 and 7,400 more workers.

“The ramifications of the shift extend to support and corporate jobs, with secondary effects on local retail and hospitality sectors.”

New Mexico received $2.6 billion from oil and gas industry taxes, royalties and fees during fiscal 2020, which ended last June, or around one-third of the state’s general fund. The state also received $809 million for its share of minerals revenue on federal properties.

“The slowdown in activity and production levels in the restrictive case puts a large and growing portion of state revenue at risk after this year,” said Golding and Patel. “Under the hybrid case, production stabilizes and preserves state royalty and tax revenue closer to current levels.”

Beyond permits and leasing, oil refineries and chemical facilities on the Gulf Coast also are likely to face changes from losing Permian barrels, according to the Dallas Fed analysis.

“New policies are likely months away, but oil companies, state governments and municipalities are in the process of examining the potential outcomes,” Golding and Patel said. “We expect production from other basins to decline against business-as-usual forecasts as well, especially in the Gulf of Mexico, where the federal government manages nearly all oil and gas activity.”