A New Mexico district court on Tuesday said recent oil and gas auctions held by federal authorities were properly conducted, but it said the public must be allowed to participate in future sales. 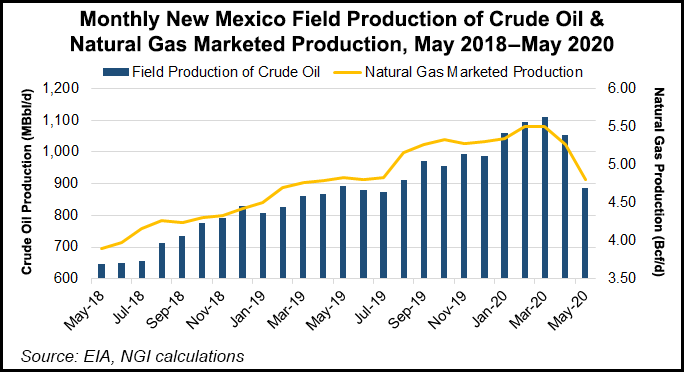 The U.S. District Court for the District of New Mexico overall ruled against WildEarth Guardians, which challenged approval by the Department of Interior’s Bureau of Land Management (BLM) for three oil and gas lease sales across more than 68,200 acres of federal land (No. 1:19-cv-00505-RB-SCY).

The environmental advocacy group had filed the lawsuit against Interior Secretary David Bernhardt, in his capacity as head of BLM. The American Petroleum Institute and the Western Energy Alliance joined as intervenor-defendants.

The plaintiff contended that BLM failed to perform adequate analyses before the sales were approved in 2017 and 2018. Authorities “did not account for the cumulative environmental effects of existing development in the region and failed to frame the auctions within the broader global climate crisis,” the court filing noted.

However, the court deferred to BLM’s decision making, citing the APA. In addition, the NEPA “does not require that BLM perform specific tests to measure environmental impact,” said the justices.

“After considering the parties’ briefs and the extensive administrative record, the court recalls the final chapter of Rachel Carson’s seminal Silent Spring, where she warns that we stand at a fork in the road. One path leads toward environmental intervention; the other toward the status quo…

“However dire this fork might seem, only policymakers are empowered to choose which of these two paths to take. The court’s role is simply to ensure that once that decision is made, the parties stay within the guardrails of the chosen path.”

New Mexico’s Carlsbad and Permian Basin oil and gas resources make the state one of the largest developments in the country, the court noted.

“As such, this growth will provoke strong reactions from those who see it as an economic boon to the area, and those who believe that the oil and gas industry is a threat to the environment. Amid these tensions, the court has a simple role: to apply the law as it stands, without comment on the underlying policies.”

Courts historically have deferred to a federal agency’s interpretation of statutes it is tasked with enforcing, the district court judges noted. “As long as the environmental impact is sufficiently considered and the record demonstrates that the agencies in question followed the NEPA procedures…the court will not second-guess the wisdom of the ultimate decision.”

BLM, said the court, complied with NEPA “when it took a hard look at how its leasing authorizations would cumulatively affect the regional and global environment, air quality and water quality. BLM sufficiently accounted for the cumulative effect of oil and gas development in the region, and it was not required to use specific climate change methodologies to assess this impact.”

WildEarth’s lawsuit had suggested BLM should have applied the cost of carbon protocol to determine the “project’s contribution to costs associated with global climate change.” However, the court ruled that BLM was not required to apply a “social cost carbon protocol” in evaluating the lease sales.

The court, in a 47-page opinion by Senior Judge Robert C. Brack, also found that BLM had appropriately considered the impact on air quality as well as the water quantity/quality in approving the lease sales. BLM also had “reasonably determined” that no environmental impact statement was needed.

However, the court ruled that WildEarth had standing to make the challenge. It also cited that among other things, BLM had altered language in the rules, which violated NEPA and the FLPMA.

“Because its members have offered evidence proving their enjoyment of the land, they are harmed when NEPA is not followed,” said the court. “Showing such a violation could result in vacating certain leases, and an overall reduction in greenhouse gas emissions. That redress would increase members’ enjoyment of the land.”

The court also ruled in favor of WildEarth, which found BLM had altered language regarding public participation. Language in BLM’s Instruction Memorandum (IM) 2010-117 stated that “field offices will provide for public participation as of the review of parcels identified for potential leasing.” However, a IM 2018-034 altered the language to “may” from “will.”

That change was one in which the court took issue. A previous ruling “makes clear that alterations to existing regulations must undergo notice-and-comment rulemaking,” said the New Mexico court. In addition, the change made by the IM two years ago “violates several associated FLPMA and NEPA regulations.”

However, “given the minor language alternation,” the court said “vacating the leases is a gross over-exaggeration and a mark of judicial overreach. Vacating these leases would result in shutting down 31 wells and New Mexico returning hundreds of millions of dollars.”

However, the court said it would “strike the discretionary language and remind BLM that the law requires public participation in the process under NEPA, FLPMA and their companion regulations. Any desire to take the public out of the process must go through Congress as it pertains to NEPA and FLPMA or through notice-and-comment rulemaking with regard to their implementing regulations.”

The district court urged BLM to alter the language in the IM to ensure it was consistent with federal law. “A simple reversion to the language in IM 2010-117 would suffice.”