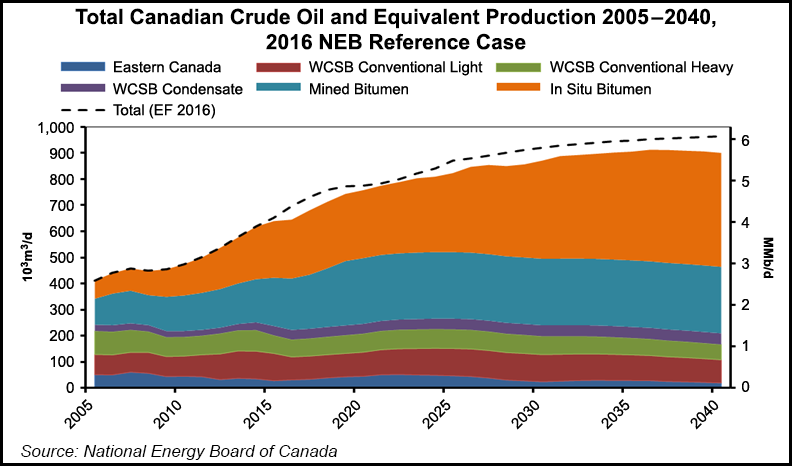 The innovation, devised to cut greenhouse gas (GHG) emissions by gas-fired steam boilers, started a niche market three years ago that expanded to 7,565 b/d of propane and butane in 2017, reports the National Energy Board (NEB).

“Companies have increasingly experimented with the addition of solvents to the steam injected into their in situ wells,” the NEB observes in the oilsands volume in a new series of Canadian energy supply, demand and outlook assessments.

“This has a number of effects. Notably, it decreases the amount of steam needed to produce a barrel of bitumen, and also lowers the carbon footprint of that same barrel of oil by requiring less natural gas to produce the steam,” the board said.

“Though the technology is not widely used yet, demand for propane and butane, the two natural gas liquids primarily used as solvents in pilot projects, has potential to increase significantly.”

In the board’s conservative “reference case” forecast, oilsands use of gas-liquid bitumen extraction scrubbers about doubles to 15,180 b/d by 2040.

In a more optimistic “technology case” of stronger attention to environmental and efficiency improvements, the demand for solvents as replacements for steam nearly triples to 20,707b/d.

The industry also has been warned by the Canadian Energy Research Institute that it is liable to hit a provincially imposed hard cap on emissions by about 2028 if its present growth rate continues using only old production methods: 100 million tons/year. The current total is 70 million tons.

The NEB points out that use of the emerging solvent technology improves a key oilsands production efficiency and cost index: the steam-oil ratio, or SOR for short. The yardstick measures amounts of steam used to boil bitumen out of oilsands ore and the volumes of gas burned by in-situ operations.

The average SOR is currently 3.6 barrels of steam per barrel of bitumen for the fastest growing method, which is steam-assisted gravity drainage (SAGD). The method uses parallel horizontal wells for simultaneous heat injection and production.

Industry standard boilers use 0.4 Mcf of gas per barrel of steam, yielding an SAGD gas consumption average of 1.4 Mcf per barrel of bitumen production.

Even allowing for a slowed investment pace due to lean commodity prices, Alberta oilsands production is projected to increase by 73-88% to 4.5-4.9 million b/d over the next 20 years. In-situ production is forecast to lead the growth and drive up oilsands gas-use by 55% to 4.8 Bcf/d.

But the emergence of a new gas liquids market spawned by technical innovation highlights a key feature of all current forecasts â€“ uncertainty prevails, admits the NEB.

Along with unpredictable commodity prices and pipeline construction, “Efforts to increase efficiency and decrease costs and environmental footprints in the oilsands are another key uncertainty in our projections,” says the board.