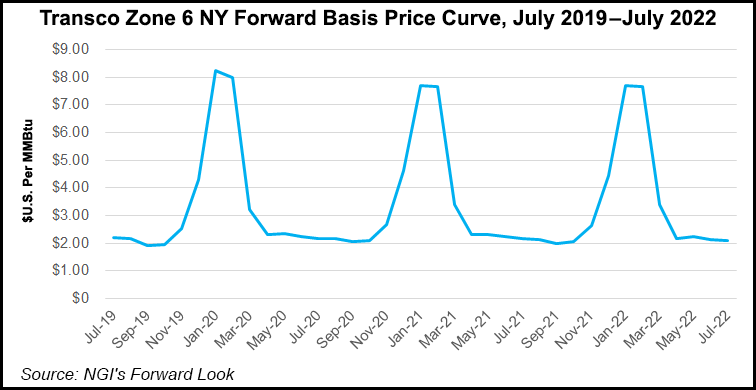 In a late decision on Wednesday, the New Jersey Department of Environmental Protection (NJDEP) denied a water quality certification (WQC) for the project along with coastal wetland, flood hazard area and waterfront development permits. The agency found that the company failed to demonstrate compliance for those authorizations for a variety of reasons. However, The agency did deny the permits “without prejudice,” leaving the door open for Transco to reapply for them.

The company said in a statement that it is “assessing the discrete technical issues” raised by the agency. “We believe that we can be responsive to the issues raised by the agency and intend to resubmit the application to the agency in a timely manner to maintain the customer’s in-service date requirement.”

Northeast Supply is fully subscribed by utility National Grid to get more gas into New York City by the winter of 2020-21. Supply shortages in the city are impacting new gas service.

NJDEP said alternatives that could minimize the project’s environmental impacts require further analysis. The agency also said that Transco failed to show public need for a compressor station in Franklin Township and expressed concerns about dredging in Raritan Bay and its impacts on water quality.

Specifically, New York regulators said the project, part of which would cross the Raritan and New York bays underwater, would result in “significant water quality impacts” from the re-suspension of sediments and other contaminants, including mercury and copper. The pipeline would also “cause impacts to habitats” because of disturbances to shellfish beds and other resources, DEC said.

The Federal Energy Regulatory Commission issued a favorable final environmental impact statement earlier this year, clearing the project to advance, and it approved Northeast Supply in May. New York also left the door open for Transco to resubmit its WQC application, which the company has done, but the move sets the project up for further regulatory review that could take up to a year in that state.

As New York continues to favor stronger climate goals it has declined to authorize a series of natural gas pipeline projects over the last three years. Similarly, New Jersey has started to show a stronger hand with the industry.

Since Democratic Gov. Phil Murphy took office last year, the state has rejoined the Regional Greenhouse Gas Initiative, explored more renewable energy and pursued stronger efforts to combat climate change. Murphy also has voiced his support for a ban against hydraulic fracturing in the Delaware River Basin, and the state has battled the PennEast Pipeline project.

Environmental groups have waged a staunch campaign in opposition to Northeast Supply in both states. The National Resources Defense Council and the New Jersey Sierra Club were among those that quickly hailed the NJDEP’s decision.

“This is a big victory for the people and the environment,” said New Jersey Sierra Club Director Jeff Tittel. “NJDEP stood up to Transco and stood with us by rejecting the Northeast Supply permits. This pipeline is a dangerous, damaging and unnecessary project that would pollute our waterways and jeopardize public safety. “

Of particular concern for the project’s opponents is the 23-mile segment of pipeline that would cross Raritan Bay from Old Bridge, NJ, to Rockaway Point in Queens. There are already other pipelines installed and operating in those waters. Transco installed the first line in the Raritan Bay in 1951.

The system would link gas from Transco’s Compressor Station 195 in York County, PA, to its offshore Rockaway Transfer Point, an existing interconnection between the underwater Lower New York Bay Lateral and the Rockaway Delivery Lateral in New York waters. Pennsylvania issued a WQC for the project in March 2018.