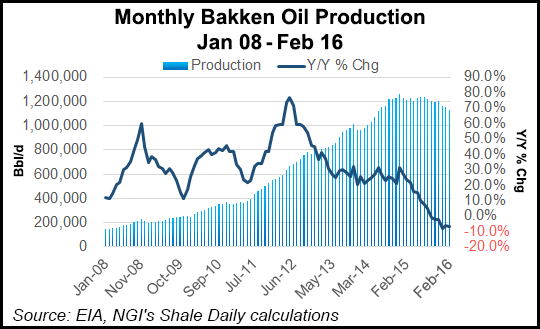 A year-end 2016 start for the pipeline that eventually could move up to half of the Bakken’s 1 million b/d production to various markets will require multiple spreads being worked on simultaneously, Kringstad said. “All anticipation is that all the segments will be up and in service by the end of the year,” he said.

An ETP spokesperson told NGI’s Shale Daily last Friday that all approvals are in place for the four states crossed by the pipeline route (North Dakota, South Dakota, Iowa and Illinois).

Kringstad said the proposed pipeline could eventually provide 450,000 b/d in new pipeline capacity, and could be expanded if market conditions permit.

Prices today make pipelines the most economic means of transporting crude oil, said Kringstad, noting that in January 52% of Bakken supplies were being transported in pipelines, compared to 40% by rail. As recently as 12 or 18 months ago, rail was carrying about 70% of Bakken production to market. On average, rail costs $4-7 more per barrel to transport, he said

Kringstad said he would “expect a positive impact on pricing from the Dakota Access Pipeline, but to put an exact dollar amount on it is impossible.”

The other impact expected, given current market conditions, is “a significant reduction of rail shipments” of Bakken crude, said Kringstad.

“This would be the first major system providing high levels of production from North Dakota directly to the Gulf Coast. And with the prices as they are today and the pipeline options to the Gulf, in my opinion the Gulf will be a more attractive option than trying to get to the East or West coastal areas assuming that barrels are not committed to one of those areas.”

With the current drop in production and the added new pipeline capacity, Kringstad said all indicators are that this will mean continuing declines in rail volumes.