The new director of Mexico’s AsociaciÃ³n Mexicana de Empresas de Hidrocarburos (AMEXHI), Merlin Cochran, sent a conciliatory message to the government on Tuesday by saying that both public and private sector companies were key to the success of the country’s energy sector. 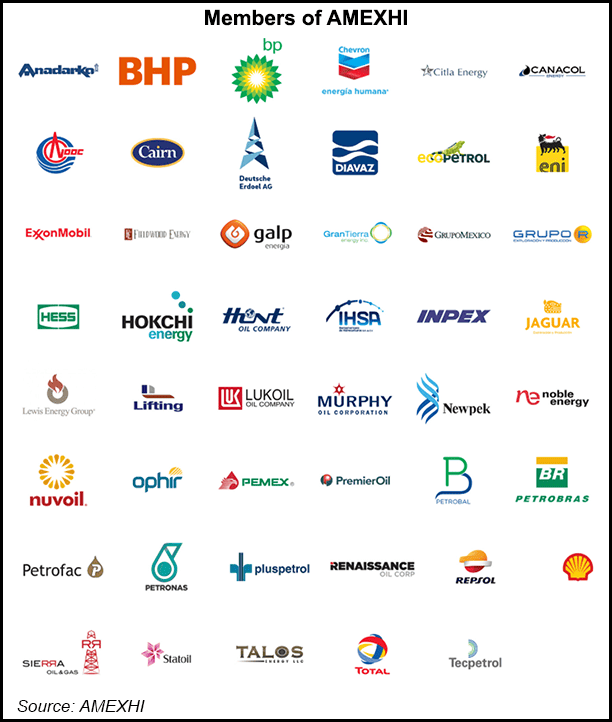 AMEXHI, Mexico’s equivalent of the American Petroleum Institute (API), is a trade group comprising 47 oil and natural gas companies with operations in the country.

The group was founded in 2015 in the wake of Mexico’s 2013-2014 constitutional energy reform, which ended the upstream monopoly formerly held by national oil company PetrÃ³leos Mexicanos (Pemex).

President AndrÃ©s Manuel LÃ³pez Obrador, who took office Dec. 1, opposed the legislation and has since suspended for three years a series of competitive bid rounds that the reform made possible.

“The first thing that we’re trying to say when we talk with the government is, ”We are your partners,’” Cochran said during a panel discussion at the Woodrow Wilson International Center for Scholars in Washington, DC. “Our production is Mexico’s production.”

Both Cochran and ComisiÃ³n Nacional de Hidrocarburos (CNH) commissioner Sergio Pimentel have highlighted in recent days that the government take of revenue generated from E&P contracts awarded under the reform averages 72-74%, in line with regimes around the world.

In 2017 and 2018, contracts awarded through Mexico’s reform generated $3.106 billion of revenue for the government, of which 46% went to the country’s sovereign oil fund and 54% directly to Pemex, according to CNH’s Centro Nacional de InformaciÃ³n de Hidrocarburos (CNIH).

Nonetheless, LÃ³pez Obrador has characterized the reform and the bid rounds as a usurpation of Mexico’s sovereignty, which has historically been synonymous with the country’s oil resources. He has instead sought to strengthen Pemex by giving it a bigger budget, a $3.9 billion capital injection, and a lower tax burden, measures which failed to prevent credit rating downgrades by Fitch Ratings and S&P Global.

In addition to the rounds, the energy reform allows foreign producers to bid for operating stakes in joint-ventures with Pemex through farmout tenders, and for the migration of pre-reform oilfield services contracts to the license or production sharing model.

LÃ³pez Obrador has said that the 111 contracts awarded under the reform must begin to show results before the rounds can resume.

“We need to ensure that people understand it takes time to mature,” said Cochran, a former rig manager for Schlumberger Ltd. and Arabian Drilling Company who also worked for Mexican energy ministry Sener under the previous government.

“We can’t produce first oil the day after the contracts are signed.”

Contracts awarded through the reform â€“ including bid rounds, farmouts, and migrations – were producing 71,195 b/d of oil and 175.6 MMcf/d of natural gas as of January 1, according to CNIH.

The remainder of the country’s output comes from Pemex, which produced 1.623 million b/d of crude and 3.696 Bcf/d natural gas in January, down 8.6% and 8.9% year-on-year, respectively.

CNH, which regulates the upstream segment and administers the tenders, on Tuesday approved development plans for two onshore Pemex farmout contracts in southeastern Mexico that call for combined investment of $1.4 billion.

Operating stakes in the Cardenas-Mora and Ogarrio blocks were awarded in 2017 to Egypt-based Cheiron Holdings Ltd. and Germany’s DEA Deutsche Erdoel AG, respectively.

Cochran stressed the importance of maintaining the autonomy of CNH and the ComisiÃ³n Reguladora de EnergÃ­a, Mexico’s electricity and fuels regulator. LÃ³pez Obrador has targeted both agencies as favoring the private sector, to the detriment of Pemex and state power utility ComisiÃ³n Federal de Electricidad.

Without the level playing field and regulatory certainty established by the regulators, “I doubt any of the [private energy] companies would be there,” Cochran said.