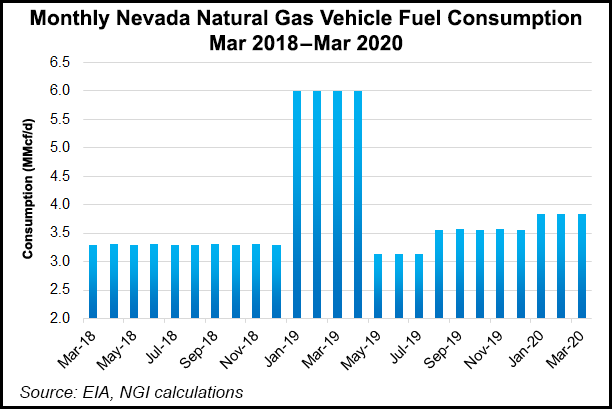 New regulations, targeted for 2024, would be part of the “Clean Cars Nevada,” involving the Nevada Division of Environmental Protection (NDEP) and Department of Motor Vehicles (DMV) that would work to adopt California vehicle standards.

The proposed regulations “aim to reduce both greenhouse gas and pollutant emissions from the fleet of vehicles sold annually by motor vehicle manufacturers in this state,” said Sisolak spokesperson Samantha Thompson.

NDEP’s package of emissions standards if adopted would apply to fleets that could be composed of different technologies, including NGVs using RNG.

“Now more than ever, it is critical for Nevada to continue accelerating efforts to address climate change, including capturing the benefits of sustainable transportation options,” he said.

NDEP through 2021 plans to work with stakeholders on the proposed regulations.

The No. 1 source of emissions in Nevada is from transportation, said director Bradley Crowell of the Nevada Department of Conservation and Natural Resources. “Cleaner cars provide cleaner air and healthier communities.”

The technology was created with startup Opus 12, which developed a “drop-in solution” that reprograms industrial-scale “polymer electrolyte membrane (PEM) water electrolyzers” to split CO2. PEM electrolyzers can be used to produce hydrogen from water and directly integrate with intermittent sources of renewable electricity.

In the demonstration, Opus 12 developed and showed key improvements to its core CO2-to-methane technology in Berkeley, CA. Field trials now are planned.

Also on the technology front, Tesla Inc., General Motors and  a Chinese battery manufacturer said they are close to introducing an electric vehicle (EV) battery that would last for one million miles.

In addition, Italy’s Landi Renzo’s U.S. unit has secured certification from the California Air Resources Board for 2020 F-250/350 6.2-liter engines that run on compressed natural gas and RNG.

The three-member North Dakota Industrial Commission headed by Gov. Doug Burgum has unanimously voted not to impose oil and natural gas production cuts, citing similar moves by Texas and Oklahoma. The commission, which also includes the state’s attorney general and agricultural commissioner, said producers were doing a good job reacting to the double whammy of…