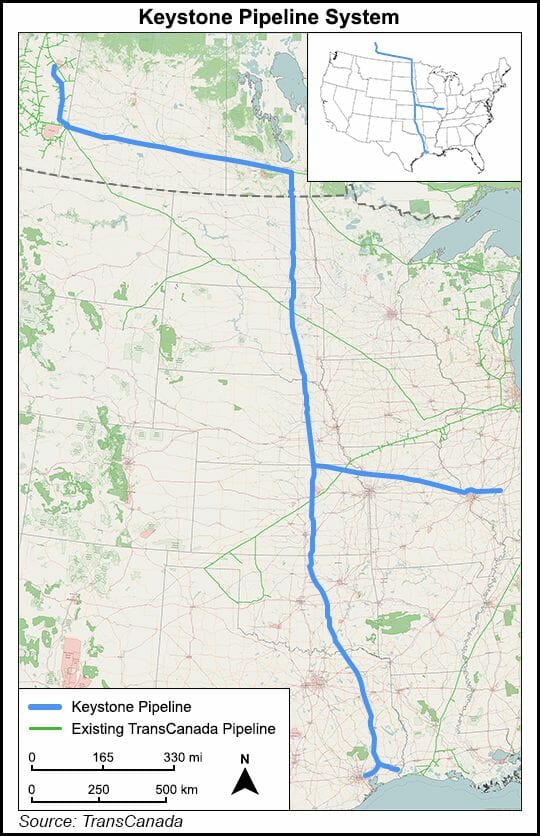 A three-vote majority on the five-member Nebraska Public Service Commission (PSC) approved TransCanada Corp.’s route south across the state for the 830,000 b/d conduit to the Gulf of Mexico from Canada’s northern bitumen belt.

The Calgary firm applauded the ruling but stopped short of setting construction or in-service target dates for the 1,897-kilometer (1,179-mile) line.

“We will conduct a careful review of the Public Service Commission’s ruling while assessing how the decision would impact the cost and schedule,” said TransCanada President Russ Girling.

Keystone XL’s forecast price tag has risen by about 50% since epic environmental dueling over the project began 10 years ago. The current estimate, US$8 billion, was nearly three years old by the time President Trump earlier this year overturned the Obama administration’s rejection of the project.

Industry conditions changed on both sides of the border during the political dispute. An open season for Keystone XL delivery capacity is underway to adjust shipper commitments to market forces led by growing U.S. production and effects of low oil prices on Alberta supply development.

If built, the pipeline would firm up Canadian consensus projections of industry growth expressed in a recent supply and demand forecast by the National Energy Board (NEB). The NEB’s long-range outlook shows total oilsands plant gas use rising by 55% to 4.8 Bcf/d day in 2040 from the current 3.1 Bcf/d, propelled by bitumen output climbing to 4.5 million b/d from 2.5 million b/d.

The force driving oilsands consumption is expected to be increasing use of low-cost underground or in-situ production with gas-fired steam injections. The specialty’s fuel use is forecast to grow by 68% to 2.7 Bcf/d from 1.6 Bcf/d.

Immediate reaction to the Nebraska ruling was less guarded among industry analysts than at TransCanada.

Wood Mackenzie analyst Zachary Rogers summed up the optimistic side. “Nebraska’s decision today greatly diminishes the political risk for the project,” he said. International industry conditions also are seen as favorable. “The pipeline’s commercial viability is strengthened as declining heavy oil production in Mexico and ongoing Venezuelan risk has recently tightened the heavy-crude market in the Gulf Coast.”

The U.S. Chamber of Commerce echoed the cautious view of TransCanada and Alberta oil exporters taking into account the outlook for pipeline and bitumen production costs.

“We’re pleased that the project has cleared this final hurdle,” said Chamber Global Energy Institute President Karen Harbert. “But the construction decision remains an economic question: After years of government delays, the decision as to whether to move forward with the pipeline now rests with the company that will be making the investment.”

As in Canada, in the United States the business community sees Keystone XL as a case history in need for reforms to let markets drive industrial development.

“The Keystone XL pipeline project has unfortunately become the poster child for the need to reform our permitting process so that we may fully realize North America’s energy potential,” Harbert said.

Also as in Canada, where oilsands expansion is hotly opposed outside Alberta, environmentalists immediately served notice that the resistance against fossil fuel growth is far from quitting. Further appeals to law courts are expected, and project opponents swiftly called for combined native and environmental protest actions.

Oil Change International was first off the protest mark.

The Nebraska PSC, it said, “chose to stand with Trump, climate denial, and Big Oil. Good luck with that.” The group vowed not to accept defeat. “Whatever happens now there is precisely zero chance that the global citizen, investor, and government momentum behind the Paris goals and against the fossil fuel industry will be stopped,” it said, referring to the global climate agreement.

Traffic remained halted, meanwhile, on the seven-year-old, 590,000 b/d first leg in the Keystone system while TransCanada crews mopped up a 5,000 bbl spill in northeastern South Dakota. The mishap last Thursday did not figure in the Nebraska decision, and the company expected to resume deliveries as early as this week.