A new regulatory ordeal, possibly lasting up to 15 months, has begun to determine pipeline service and costs for production stranded by cancellations of liquefied natural gas (LNG) export projects on the north Pacific coast of British Columbia (BC). 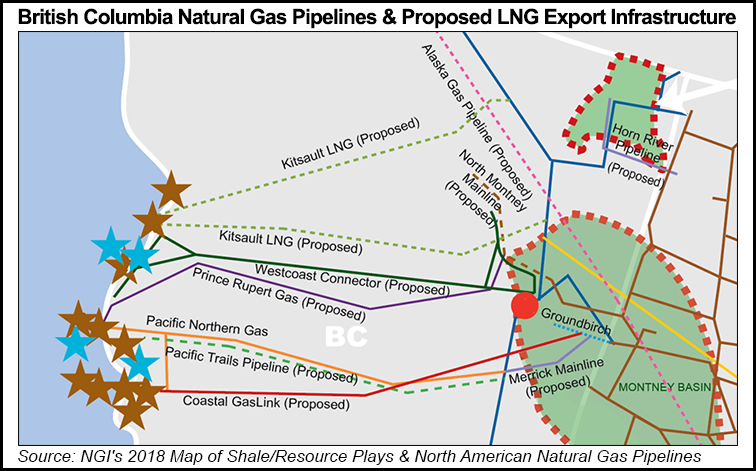 The lengthy proceeding follows an unsuccessful attempt to provide a fast fallback. After hearing from rivals and opponents, the National Energy Board (NEB) turned down a bid by TransCanada Corp. for swift conversion of an approved LNG supply line into a route to markets across Canada and the United States.

Instead of rubber-stamping the change to the pipeline’s purpose by immediately granting an approval “variance,” the NEB has launched full-dress hearings on the new plan for the C$1.4 billion ($1.1 billion) North Montney Mainline.

The board’s issues list for the case include hotly contested, conflicting toll practices among rival BC pipeline builders and demands for a fresh review of cumulative gas industry effects on the environment and native communities.

Obeying legislated regulatory timelines, the NEB set a target date of December 2018 for a decision — nearly a year later than TransCanada aimed to start building the repurposed pipeline on a quick schedule calling for deliveries in 2019.

The switch proposal, made in March, anticipated summer cancellations of the Aurora and Pacific NorthWest LNG coastal terminal projects for overseas exports of up to 6.3 Bcf/d of northeastern BC shale gas.

The North Montney Mainline holds federal and provincial approvals as a supply collector for the cross-BC TransCanada conduit left an orphan by the LNG failures, Prince Rupert Gas Transmission.

The repurposing would change the project into a branch of TransCanada’s western supply collection network for markets across North America, Nova Gas Transmission Ltd. (NGTL).

The repurposing application predicted North Montney drilling would establish 85 Tcf of reserves and more than quadruple the BC region’s production to 3.1 Bcf/d over the next 20 years.

“NGTL expects demand for natural gas across North America to increase from 95 Bcf/d in 2016 to over 130 Bcf/d by 2030,” TransCanada told the NEB. “On average, production from existing wells in the Western Canada Sedimentary Basin is declining by 18% each year, which results in approximately 2 Bcf/d of new supply being required each year to meet existing supply and market requirements on the NGTL System. This natural decline alone is sufficient to absorb the incremental supply associated with the [North Montney] facilities.”

As the North Montney Mainline repurposing case began, an announcement by Veresen Inc. and Encana Corp. highlighted the large-scale production and demand for services gathering momentum in liquids-rich BC shale gas regions.

Encana on Wednesday reported starting up a 200 MMcf/d processing plant for Montney output called Tower and two others twice its size, under construction in the region, 400 MMcf/d Sunrise and 400 MMcf/d Saturn, are to begin operating soon.

A statement by Veresen echoing industry and government agencies including the NEB, described the BC shale formation as “one of North America’s most prolific and competitive liquids-rich resource plays.”