North American natural gas futures were choppy this week as the U.S. supply picture remained unclear and with summer heat just around the corner. Mexican buyers of U.S. gas, meanwhile, should expect even higher prices in the hot months ahead. 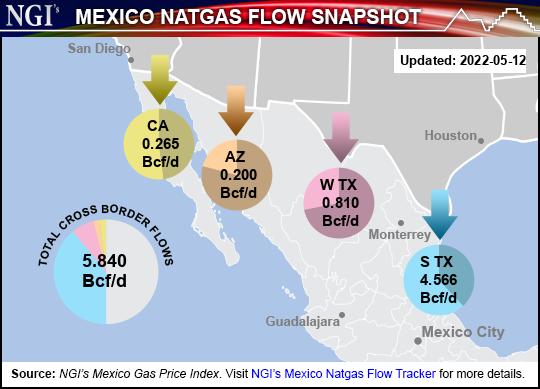 But prices are still seen as pressured to the upside as U.S. storage levels remain lower than usual. Henry Hub prices, a key benchmark for Mexico trades, are forecast to average $8.59/MMBtu in the second half of this year, the U.S. Energy Information Administration (EIA) said this week.

NatGasWeather said in the next several weeks natural gas markets will be focused on “whether U.S. production will finally consistently exceed 96 Bcf/day, how strong power burns come in during above normal temperatures and light winds, and if a hotter than normal summer shows signs of arriving early,”

Prices of U.S. pipeline shipments to Mexico in 2021 averaged 167% higher year/year at a price of $5.41/MMBtu. But this is still a $3.00 discount to forecast Henry Hub prices for the remainder of the year.

“Mexican businessmen are complaining about the higher prices, claiming the prices have to do with dependency on the United States,” a gas market participant told NGI’s Mexico GPI. She noted that Mexico President Andrés Manuel López Obrador had pledged that energy prices would not rise. “With Texas Governor Greg Abbott making a lot of noise about migrants and strengthening border controls, there is also the fear of natural gas curtailments.”

The vast majority of Mexico’s imports of natural gas come from Texas.

A gas trader told NGI’s Mexico GPI that natural gas demand in Mexico is typically strong for this time of year, but some firms that import natural gas for electricity production are seeking alternative options. The trader said it was now economically beneficial for them to tap into the Comisión Federal de Electricidad (CFE) grid for their power.

Mexico imports of U.S. natural gas dipped a little this week. According to NGI calculations, imports via pipeline from the United States were 5.84 Bcf/d on Thursday, with the 10-day average at 5.69 Bcf/d.

A gas buyer in Mexico City said “it was business as usual.” Contracts on the Sistrangas national pipeline network are renegotiated in June, “and we’ll see how things change then,” the buyer told NGI’s Mexico GPI.

Mexico’s Sistrangas five-day line pack average rose this week, hitting 6.825 Bcf on Wednesday (May 11). This is the highest level in months, but still below the optimal line pack of 6.86-7.29 Bcf needed to guarantee sufficient pressure in the system. System operator Cenagas has advised users to maintain injections and withdrawals to their contractual quantities or risk facing penalties.

Southeast production dominated the total, with 731 MMcf from the region injected into the pipeline system, up 19 MMcf from the previous week.

In Mexico, NGI natural gas spot prices were down week/week, with wild day/day variation. On Wednesday, Los Ramones rose 64.0 cents to $7.917. Monterrey via the Mier-Monterrey system rose by 63.2 cents to $7.680.

On Thursday, the EIA reported an injection of 76 Bcf natural gas into storage for the week ended May 6. The print was below the expectations of analysts.

The South Central region led all regions in the United States with an increase of 28 Bcf. This included an injection of 18 Bcf into nonsalt facilities and an 8 Bcf increase in salts, according to EIA. Until Mexico develops storage capability, this is the storage system most readily available to the country.