Demand for natural gas is likely to prove strong for several more years, and the fuel should maintain its market share in the electricity mix despite a transition to renewable sources of power such as wind and solar, Raymond James & Associates Inc. analysts said. 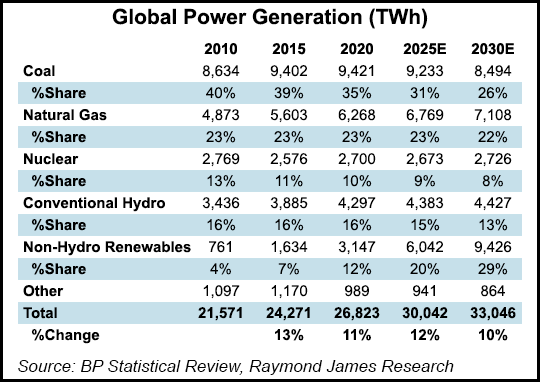 “We believe that gas-fired generation has room to grow on an absolute basis — in the U.S. and globally — at least through 2025,” the analysts said in a report Monday. “Renewables are poised for much greater share gain than gas, and the energy transition megatrend is likely to set the stage for ‘peak gas’ in the long run. But, for now, it would be premature to write the obituary for gas.”

Coal has and likely will continue to lose share to renewables, while gas maintains its position. Consumption of natural gas on a global level is expected to grow as overall demand for electricity expands, said the Raymond James team led by Pavel Molchanov.

“Over the past two decades, there were only two years of decline — 2009 (financial crisis) and 2020 (Covid) — and both were less than 1%. In other words, there is not a zero-sum game for market share between the various electricity sources,” the analysts said.

The analysts estimated that natural gas accounted for 23% of overall global power generation in 2010 and 2020, and they expect it to hold at that level through at least 2025. They projected gas’ share would dip slightly to 22% by 2030. Over the course of the current decade, they estimate consumption of natural gas will increase more than 13% due to overall increases in electricity needs.

Coal consumption, in contrast, is expected to drop 10% this decade and see its share fall from 35% in 2020 to 26% in 2030, as economically driven plant retirements in emerging markets add to the mandatory phase-outs in Europe and North America. Non-hydro renewables are expected to claim that lost share, rising from 12% in 2020 to 29% by 2030, the Raymond James team said.

Total electricity generation increased about 24% between 2010 and 2020, the analysts’ estimates show. Over this decade, “we assume that total generation will continue to grow at approximately the same pace as before, with vastly greater numbers of electric vehicles offsetting broader adoption of energy efficiency solutions,” they said.

In contrast to coal, “it is quite rare for gas to be explicitly targeted via regulatory measures. Also, the bulk of the world’s gas-fired power plants are less than 20 years old, which means that retirements are much less common than in coal. This translates into modest growth in absolute terms through 2025 and probably through 2030, with share continuing to hold steady,” the Raymond James team concluded.

In the near term, demand for natural gas in 2021 is robust, supporting strong prices and expectations for that to continue through the coming winter months. Sizzling summer heat is fueling domestic cooling needs, while demand from both Asia and Europe, where storage levels are depleted, continues to drive robust levels of U.S. liquefied natural gas exports.

New York Mercantile Exchange natural gas futures prices are up more than 60% in 2021. Prompt month prices have hovered near $4.00/MMBtu in recent weeks.

The Energy Information Administration (EIA) similarly raised its Henry Hub price outlook. In the July edition of the agency’s Short-Term Energy Outlook, the EIA lifted its projected average Henry Hub spot price to $3.21 for 2021, a 14-cent increase over the previous month’s projections.