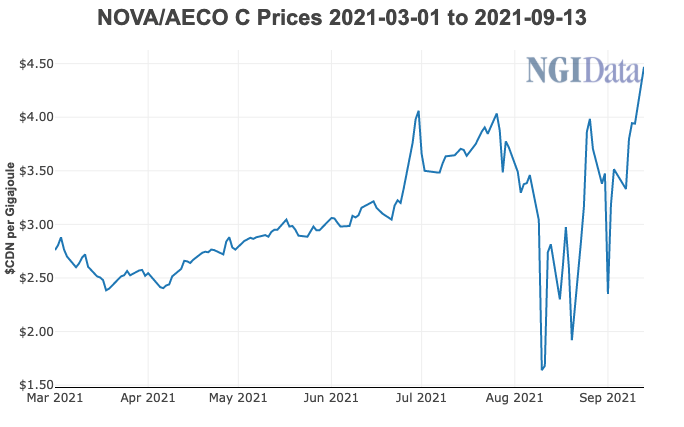 “Climate change laws, policies and regulations are one set of factors,” NGTL told CER regarding the evolving environmental rules. The pipeline also took into account “other factors such as contracts, producer activity and observed flow trends.”

As TC Energy Corp.’s Alberta and British Columbia (BC) supply collection grid, NGTL tested the gas market with a June pipe capacity auction. No shippers accepted an offer to drop current contracts and allow a reduction in the size and cost of the expansion project.

NGTL is forecasting a 19% jump in its flows to 16.6 Bcf/d by 2026 from 13.9 Bcf/d. The added traffic is expected to originate from prolific unconventional gas formations in northeastern BC and northwestern Alberta.

The project now under CER review is one of five in a C$1.2 billion ($960 million) growth package by three TC subsidiaries. They are the Foothills Pipe Lines and Gas Transmission Northwest (GTN) export systems, as well as the NGTL supply collection network.

NGTL acknowledged that the total combined volume of gas use in California and the U.S. Pacific Northwest is bound to shrink as a result of U.S. environmental policies and replacement of thermal power plants with wind and solar generation.

Still, there is industry demand for new shipping contracts.

Many of the formations in the Western Canada Sedimentary Basin (WCSB), “such as the Montney and Deep Basin, can compete economically,” according to NGTL’s West Path 2023 application. Consumption patterns also favor growth by the Canadian share of western U.S. gas markets, it noted.

“The Pacific Northwest and California markets have peak gas requirements in the spring and summer months, which compliment NGTL intra-basin [Western Canadian] demand that peaks in the winter, making these markets key for WCSB production.”

The West Path 2023 construction application predicted 25% growth — to 3 Bcf/d as of 2030 from the current 2.4 Bcf/d — in NGTL flows destined for the U.S. Pacific Northwest and California.