The U.S. natural gas rig count rose three units to 149 for the week ended Friday (May 13), while rising numbers in the oil patch rounded out another week of healthy gains for domestic drilling activity, the latest numbers from Baker Hughes Co. (BKR) show. 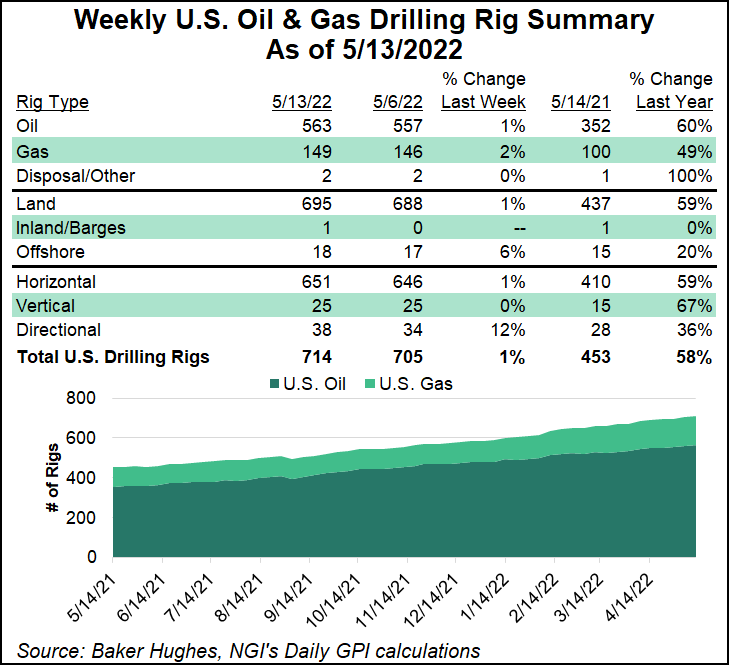 The combined U.S. rig count rose nine units to 714 as of Friday, up from 453 rigs running in the year-earlier period. Since bottoming out at around 250 in 2020, the U.S. rig count has been posting steady gains ever since, according to the BKR numbers, which are partly based on data from Enverus.

The Canadian rig count fell three units to 88 for the week, up from 59 in the year-ago period. Changes included a decline of five oil-directed rigs, partially offset by a net increase of two natural gas-directed units.

Counting by major basin, the Cana Woodford saw the largest increase for the period, adding two rigs to raise its total to 27, up from 13 a year ago. The Arkoma Woodford, the Eagle Ford Shale and the Williston Basin each added one rig week/week, while BKR recorded one-rig declines in the Ardmore Woodford, Granite Wash and Mississippian Lime.

In the state-by-state count, Oklahoma saw a net increase of four rigs week/week, raising its total to 57, more than double the 22 rigs running in the state at this time last year. Colorado, Louisiana, North Dakota, Texas, Utah and Wyoming each added one rig to their respective totals, while Kansas saw a one-rig decline for the period, BKR data show.