Boosted by gains in the Haynesville and Marcellus shales, the U.S. rig count added one unit overall to finish at 255 for the week ending Friday (Sept. 18), according to the latest figures from Baker Hughes Co. (BKR). 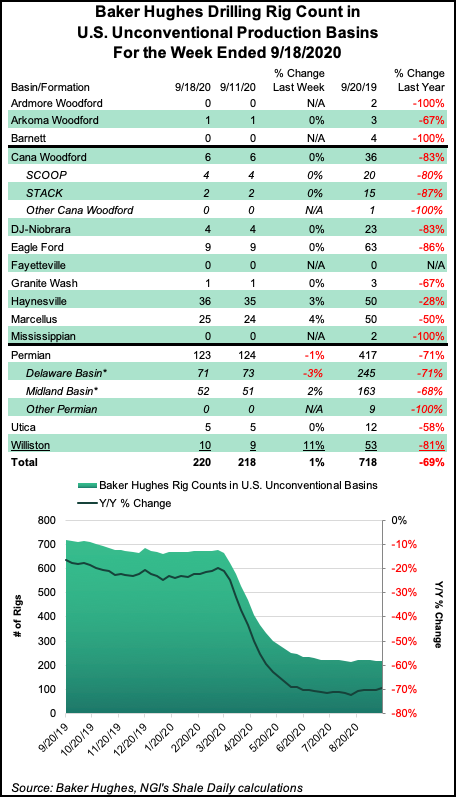 The addition of two natural gas-directed rigs in the United States offset the departure of one oil-directed unit during the week. That left the combined U.S. total 613 rigs behind the 868 active units at the same time a year ago, BKR data show.

Land drilling increased by two rigs overall, while the Gulf of Mexico saw one rig depart during the week. Vertical units declined by two, while two directional units and one horizontal unit were added.

The Canadian rig count, meanwhile, jumped 12 units week/week to reach 64, versus 119 in the year-ago period. Changes for the week included the addition of 11 oil-directed rigs and one gas-directed.

That left the combined North American rig count at 319 for the week, down from 987 in the year-ago period.

Among major plays, the gas-focused Haynesville and Marcellus shales each added one rig to their respective totals, while the Williston Basin also added a rig during the week. The Permian Basin dropped one rig from its total, according to BKR.

The Covid-19 pandemic’s crushing impact on energy markets has continued to weigh on the outlook for oil demand. The Organization of the Petroleum Exporting Countries, aka OPEC, in its most recent monthly report again reduced its forecast for oil demand in 2020 and 2021.

Similarly, the International Energy Agency (IEA) also reduced for the second consecutive month its outlook for oil demand. IEA warned that Covid-19 may play havoc with consumption into 2021.

Meanwhile, Dallas-based law firm Haynes and Boone LLP recently wrote in an updated Oil Patch Bankruptcy Monitor report that the pandemic continued to contribute to a “collective gloom” that prices and industry activity will not turn the corner anytime soon.

Without any near-term hope for improving economic conditions for U.S. exploration and production companies, it is reasonable to expect that a “substantial” number would continue to seek protection from creditors before this year is over, according to the firm.