Protracted low West Texas Intermediate (WTI) oil prices may lead exploration and production operators to look beyond the Permian Basin to make up for a shortfall in associated gas to service domestic demand and export needs, giving other Lower 48 areas a needed boost, the International Energy Agency (IEA) said Wednesday. 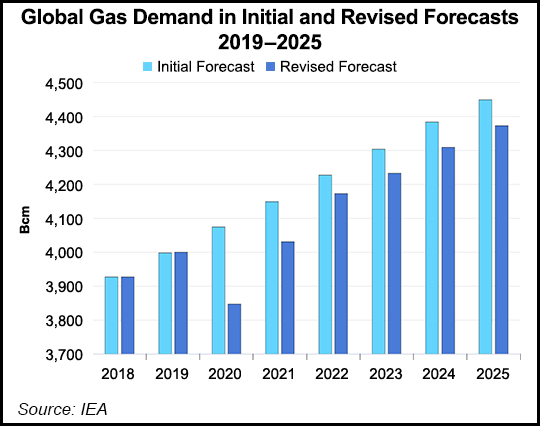 Don’t look for any big gains in gas production this year, however, the global energy watchdog said in its annual market report Gas 2020. Worldwide demand is on course for its largest annual decline in history, with consumption forecast to fall by 4%, or 150 billion cubic meters (Bcm), double the loss following the 2008 financial crisis.

“Natural gas has so far experienced a less severe impact than oil and coal, but it is far from immune from the current crisis,” IEA executive director Fatih Birol said. “The record decline this year represents a dramatic change of circumstances for an industry that had become used to strong increases in demand.”

New production and infrastructure projects should continue to come online, but growth trends are “markedly below earlier expectations, reinforcing the prospect of overcapacity and low prices,” researchers said. “This casts a shadow over future investments, which will be needed in the long term to ensure the renewal of production sources and global security of supply.”

As of early June, all major gas markets worldwide were experiencing a sharp decline in demand or growth, researchers said. More mature markets across Europe, North America and Asia were forecast to see the biggest drops this year, accounting for 75% of the total decline.

A rebound is expected in 2021, but a rapid return to the pre-crisis trajectory is unlikely.

“Global gas demand is expected to gradually recover in the next two years, but this does not mean it will quickly go back to business as usual,” Birol said. “The Covid-19 crisis will have a lasting impact on future market developments, dampening growth rates and increasing uncertainties.”

The Covid-19 aftermath should result in 75 Bcm of lost annual demand by 2025, around the same amount as the increase in global demand in 2019, researchers estimated.

The Lower 48, one of the main drivers of future supply growth, along with large conventional projects in the Middle East and Russia, “are also under pressure from the current oil price collapse and uncertainty surrounding demand trends over the short and medium term.”

The pandemic triggered an unprecedented hit to oil demand, with WTI prices falling by 40% in the first quarter. U.S. operators have announced they will curtail more than 1 million b/d in May and June, mostly from the Permian and Bakken Shale, with U.S. crude estimated to fall year/year by 2.4 million b/d.

“The risk prolonged curtailment poses to gas production depends on the characteristics of the producing wells,” said researchers. “In 2019, almost 30% of U.S. gas production (230 Bcm) was produced as a secondary product from oil wells in areas such as the Permian Basin.”

U.S. oil and gas producers this year have indicated they will reduce capital spending on average this year by around one-third.

“This has already triggered an increase in borrowing, as well as the likelihood that restrained spending will continue well into 2021,” researchers said. “Prior to the oil demand shock, the gas play horizontal rig count in the United States had already plummeted by almost 50% versus its June 2019 peak, all in the midst of weak gas prices.”

To make up for the shortfall in associated gas to service domestic demand and liquefied natural gas (LNG) export needs, IEA said explorers once again may look to build up gas resources in the Appalachian Basin and Haynesville Shale.

“Even so, a period of rapid growth may test constraints of infrastructure, labor and capital, which had seemed sufficient before the fundamentals shifted,” researchers noted. “In these conditions, a geographic shift in gas production and operator strategy may be observed if gas demand remains steadfast. At higher prices, a recovery in associated gas in the Permian and other locations could be rapid, but a considerable portion of the short-term projected growth in gas production from the play has been discounted.”

The short-term outcome remains uncertain, but IEA said by 2025, annual U.S. gas production is forecast to reach above 1,030 Bcm, increasing by 1.2% annually from 2021.

“North American gas production represented over 28% of total gas supply in 2019, and production in the region increases 1.5% annually through 2025 according to our forecast…

“Canada continues to increase production at a projected rate of 3% annually, mostly from the Montney Shale, to reach the levels needed to service the 19 Bcm/year LNG Canada project. In Mexico, production continues to decline, but at a more moderate rate of 2% annually compared to historical reductions.”