Natural gas futures finished off the short holiday week with another huge leap higher after the latest inventory data confirmed a sluggish start to the injection season. The May Nymex gas futures contract settled Thursday at $7.300, up 30.3 cents on the day. June futures raced 32.7 cents higher to $7.423. 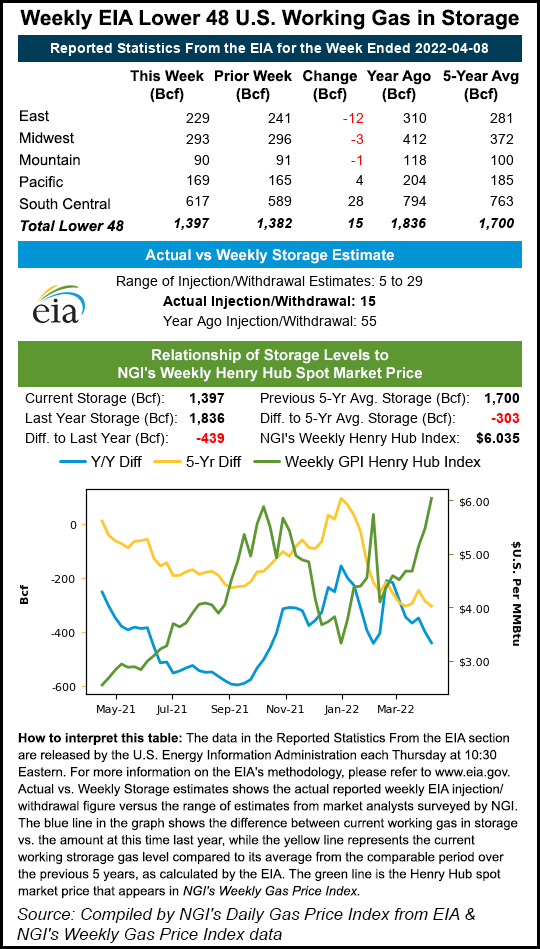 Momentum continued in the spot gas market as well ahead of a chilly weather pattern seen continuing until the last week of April. NGI’s Spot Gas National Avg. climbed 28.0 cents to $6.805.

Trading action on Thursday began much like it has on most days this week, with futures prices up at the open as Russia’s war in Ukraine continues to provide a volatile backdrop for an increasingly bullish long-term outlook for U.S. gas. Though global gas prices softened ahead of the long Easter weekend, a quick reversal could quickly occur in the event Russia halts gas shipments to Europe. Russian President Putin has demanded payment for his country’s gas supplies in rubles, threatening to halt shipments to buyers that fail to comply.

A look at March flows, however, indicates that Russian liquefied natural gas (LNG) exports increased by 19% year/year to 3.1 million tons last month, according to shipbroker Banchero Costa. Shipments from the country were also 25% higher than they were in March 2020.

Nevertheless, the potential for a stop in Russian gas flows to Europe has kept the market on edge. Against that backdrop, concerns are growing that the Lower 48 could have supply issues of its own next winter.

The lingering heating demand, combined with a failure of production to break out of its months-long range, have set up a tall order for the gas market to ensure adequate supply at the end of October. The latest government inventory data confirmed that trend.

The Energy Information Administration (EIA) on Thursday reported a 15 Bcf injection for the week ending April 8, in line with expectations but far under historical norms. During the same week last year, the EIA said stocks rose by 55 Bcf, while the five-year average build is 33 Bcf.

The South Central recorded the largest increase in stocks, which were up by a net 28 Bcf, according to EIA. This included a 15 Bcf build in nonsalt facilities and a 13 Bcf build in salts. Pacific inventories added a modest 4 Bcf.

However, the continued bursts of cold resulted in yet another drawdown in East and Midwest inventories, which fell by 12 Bcf and 3 Bcf, respectively.

Total working gas in storage as of April 8 was 1,397 Bcf, which is 439 Bcf below stocks at this time last year and 303 Bcf below the five-year average, EIA said.

Bespoke Weather Services said barring any revisions in the next EIA report, balances have not loosened as much as the data had led the market to believe. The market simply needs more loosening, especially with a potentially hotter summer still ahead and a trajectory that would place end-of-season storage levels too low to be comfortable heading into winter.

At the same time, there has not been much demand destruction despite the sharp rise in prices, according to Bespoke. This places the balancing item squarely on production. Strong gains in output are necessary over the next several weeks for any sizable pullback in prices, it said. “The longer we go without this occurring, the higher prices are likely to keep running, even after such a strong move the last few weeks.”

It’s Coming, But When?

The latest rig data from Baker Hughes Co. does offer some optimism for the market. The U.S. rig count for the week ending April 14 rose by four units to 693, led by the Permian Basin and Eagle Ford Shale.

Further growth is expected as well, particularly in the Permian. Rystad Energy noted recently that horizontal drilling permits for new wells in the basin hit an all-time high in March, with 904 total permit awards.

Weekly approved permits have hovered between 188 and 227 since March 7, according to Rystad. This, it said, is an unprecedented period of high activity that pushed the four-week average to 210 for the week ending April 3, a record for horizontal permit approvals in the core U.S. shale patch over four weeks.

“This is a clear signal that operators in the basin are kicking into high gear on their development plans, positioning for a significant ramp-up of activity level and an acceleration in the speed of output expansion over the next few months once supply chain bottlenecks ease,” said Rystad’s Artem Abramov, head of shale research. “The surge in permitting activity positions the industry for continuous rig count additions in the second half of 2022 and foreshadows a significant increase in supply capacity from early 2023.”

Abramov cautioned, though, that many permits never get drilled, and operators follow diverse permitting strategies. “In other words, the time from permit approval to the start of drilling varies substantially across producers in the same basin.”

Long Easter weekend notwithstanding, spot gas prices continued to climb on Thursday. Trading covered gas deliveries through Monday, a period in which storms were expected to wreak havoc on the East Coast while warm air was building in the southern states.

Similar price increases spread across Appalachia, while gains were tempered a bit in the Southeast. Cove Point spot gas was up 18.5 cents to $6.915.

The National Weather Service said a meandering stationary front in the West and arriving low pressure system would generate additional coastal/low elevation rain showers as well as mountain snow for much of the Pacific Northwest and Northern Rockies over the next couple of days. Parts of the northern Sierra and Northern Rockies were forecast to pick up another six to 12 inches of snow by Saturday.

Meanwhile, Nova Gas Transmission Ltd. (NGTL) said partial cuts to firm transportation delivery services in the West Gate region would begin on Monday and last until further notice. The work is part of planned maintenance on the Burton Creek compressor station, limiting flow capacity through the Alberta/BC border by 530 MMcf/d.

Based on April 12 flows, actual cuts are likely to be closer to 282 MMcf/d, according to Wood Mackenzie. This leaves net flows roughly 374 MMcf/d under the past 30-day average. The Burton Creek compressor station is located just upstream of NGTL’s interconnect with Foothills British Columbia.