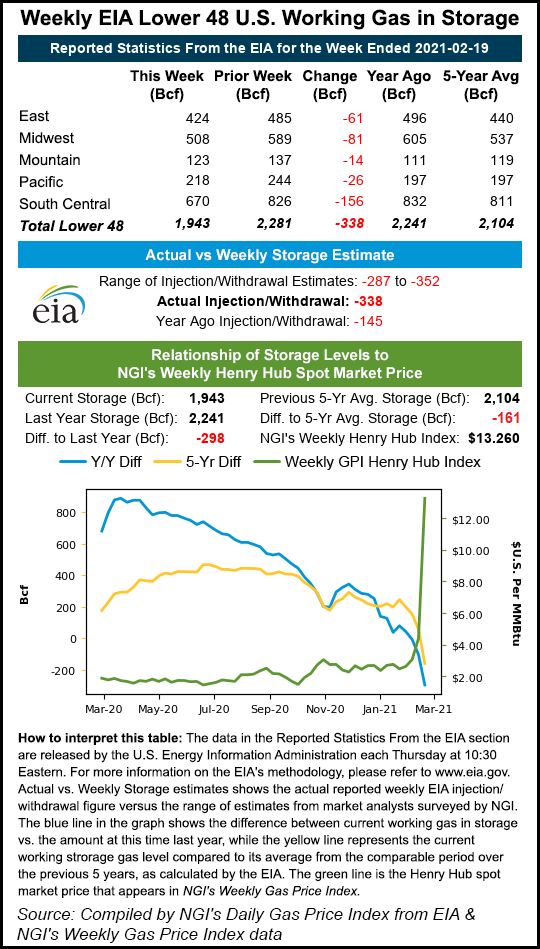 April natural gas futures prices briefly bounced on the EIA figure, but anyone who blinked may have missed it. The prompt Nymex contract was trading relatively flat day/day at around $2.805/MMBtu in the minutes leading up to the report. As the data crossed trading desks, the April contract jumped to $2.819, but by 11 a.m. ET it was at $2.788, down seven-tenths of a cent from Wednesday’s close.

Analyst Stephen Schork, speaking on The Desk’s online energy chat Enelyst on Thursday, said the 338 Bcf draw fell short of the 359 Bcf record set in January 2018, but is “a monster nonetheless. We can’t rally on a number like this…that’s a problem.”

Estimates ahead of the EIA report were wide ranging as analysts struggled to assess the impacts of last week’s widespread power outages on production, pipelines, plants, storage facilities and other infrastructure. During the unrivaled Arctic storm, Texas Gov. Greg Abbott also ordered gas producers in the state to not sell gas across state lines in an attempt to help restore power to the grid.

Complicating matters, the EIA South Central region already is tough to gauge given the lack of transparency in non-regulated intrastate pipeline flow data.

Several major surveys had clustered around a draw near 335 Bcf, while NGI’s model projected a much smaller pull of 287 Bcf.

“This is like Powerball this week,” independent weather forecaster Corey Lefkof said while participating on the Enelyst chat. “I wonder what the number would have been without demand destruction in Texas.”