Mexico’s initial upstream auctions, including round 2.1 held in mid-June, earned billions for the country in the first upstream auctions, but to date, natural gas has played only a minor role. That may change with two auctions scheduled in July, with gas potentially breaking out as a star performer. 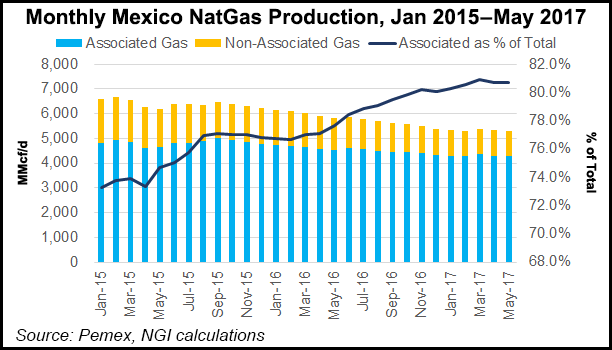 Oil production in Mexico has been declining, but natural gas output has fared considerably worse, with gas production during May down 9.3% year/year at 5.299 Bcf/d. But while natural gas has been somewhat of a wallflower in the auctions so far, it may be the belle of the ball on July 12, when rounds 2.2 and 2.3 auctions are held the same day.

The auctions also may see well-heeled suitors, including two of the most powerful tycoons in the Americas, Carlos Slim and Alberto Bailleres.

The two auctions for offshore and conventional onshore properties follow the successful round 2.1 for shallow water drilling held June 19. According to officials, Round 2.4 (deepwater and unconventional onshore) has yet to be determined but should take place before the end of 2017.

Round 2.2 includes nine blocks offering licenses in the Burgos Basin, just across the Texas border and long Mexico’s leading producer of non-associated natural gas. Burgos, however, has been in sharp decline. In May the basin produced 694 MMcf/d. In 2005, it peaked at more than 1.5 Bcf/d.

A 10th block in round 2.2 offers extra-light crude and gas in southeastern Mexico. Two other blocks in the southeast were withdrawn pending consultations with indigenous communities.

Check back with NGI as our Thought Leaders analyze and report on Mexico’s deregulating natural gas market in a soon to be published daily newsletter, NGI’s Mexico Gas Price Index, which will include news, prices and relevant market data.

Five companies and four consortiums are pre-qualified for the 2.2 auction, including Colombia’s Ecopetrol, Canada-based Gran Tierra and three Mexican companies. Of the four consortiums, one is Mexican. The other three, each with a Mexican partner, are led by U.S.-based Verdad Exploration, Canada’s Sun God Energia and Spain’s Tecpetrol.

Round 2.3 features 14 licenses: four in Burgos; five in the southeast, including one in the Chiapas foldbelt; and four in the southern Gulf state of Veracruz, including in the Tampico-Misantla Basin. The Tampico-Misantla Basin, which extends across east-central Mexico into the shallow waters of the Gulf of Mexico, may be one of 24 global onshore “super basins,” much like the Permian Basin with its myriad reservoirs and multiple source rocks, according to a recent report by IHS Markit.

The blocks in Veracruz feature wet and dry natural gas and oil, according to the National Hydrocarbons Commission.

Nineteen companies have been prequalified to bid in round 2.3. Of the 12 that have prequalified individually, nine are based in Mexico. The three others are Ecopetrol, Gran Tierra and P&S Oil and Gas of the United States.

The potential Mexican individual bidders are Carso Oil and Gas, controlled by Slim, regarded as one of the world’s wealthiest tycoons and whose business interests include telecommunications, retail and energy. Also featured is PetroBal, a unit of the empire of another of Mexico’s billionaires, Bailleres, who controls Industrias PeÃ±oles, the world’s leading silver producer.

Of the seven consortiums prequalified to bid, Mexico’s Newpek is teaming up with U.S.-based Verdad Exploration. Newpek is a unit of Mexico’s leading industrial conglomerate Monterrey-based Grupo Alfa, whose interests include petrochemicals, food-processing and auto parts.

Of the seven consortiums, only four are foreign-based companies: Verdad, Shandong Kerui of China, U.S.-based Roma Exploration and Production and the Uruguayan unit of Brazil’s Petrosynergy.

However, the efforts to generate more natural gas production in the upstream auctions is far from enough, said analyst Arturo Carranza of the Mexican Institute of Public Administration.

“The recent decline in the natural gas reserves has been alarming,” Carranza said.

In addition to Burgos, the biggest gas producer is the huge offshore Cantarell complex that in 2004 produced almost 2.4 billion b/d and is now in almost complete decline.

“Cantarell now produces about 1 Bcf/d of gas but much of it is useless because of the contamination of nitrogen that was used for years to inject the oil wells for secondary recovery,” Carranza said. “The July 12 auctions can help to reduce Mexico’s growing dependence on imports of natural gas. But what they produce is likely only to be marginal in that sense.”

Meanwhile,Mexico’s state-owned Petroleos Mexicanos (Pemex) said Armando Palacios has been appointed to replace Jose Manuel Carrera as corporate director of new business and alliances. Pemex offered no explanation for the change, but new business and alliances has been a top priority as it needs to boost its finances. Farm-outs have been slow to emerge in the upstream, while alliances in refining have been nonexistent.

Palacios, like Pemex Director-General Jose Antonio Gonzalez Anaya, is part of the state-sector financial elite. Both have worked within the Finance ministry and in the state Social Security Institute.