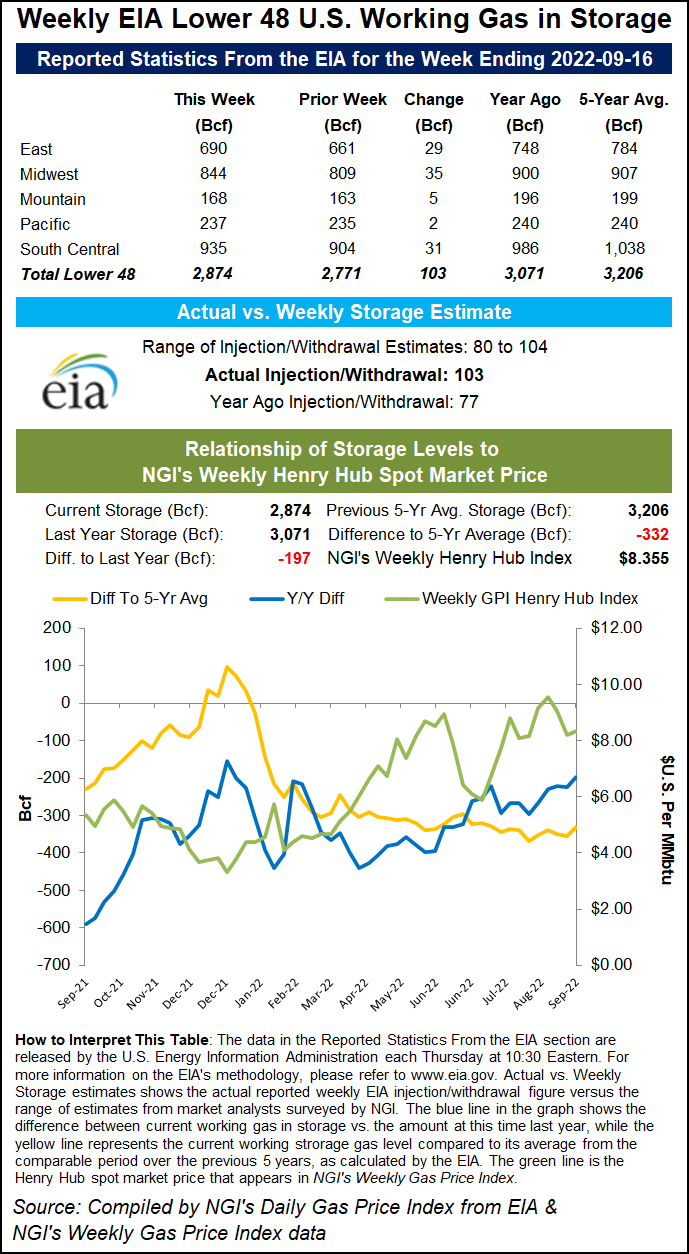 Heat early in the week quickly dissipated by midweek and, as the official start to autumn arrived Thursday, comfortable conditions permeated much of the Lower 48, from the West Coast to the Midwest to the East.

The October Nymex futures contract also faltered through the course of the past week as bearish sentiment formed alongside forecasts for benign weather later this month and beyond.

“The longer-range weather pattern maintains the theme of a warmer-than-normal October into November due to upper high pressure holding strong over the northern half of the U.S. for only light heating demand,” meteorologist Rhett Milne of NatgasWeather said.

Production also hovered near 100 Bcf/d during the week – close to a record high – and kept at bay lingering worries about ample supply for the coming winter.

The prompt month settled at $6.828/MMBtu to close the trading week on Friday, down 26.1 cents on the day and off 12% from the prior week’s finish.

He said that, in addition to waning weather-driven demand, an upcoming maintenance event planned for the Cove Point LNG terminal in Maryland would temporarily limit export volumes and could put further downward pressure on prices.

Notably, “any more gas production gains into the end of the month,” Rubin added, “may further dampen sentiment.”

EIA posted an injection of 103 Bcf into natural gas storage for the week ended Sept. 16. The result exceeded analysts’ expectations and provided further evidence that increased output is helping to align supply and demand after a scorching summer raised worries about the adequacy of domestic supplies.

The triple-digit build marked the largest of the year, and it eclipsed historical averages, creating a heavy dose of bearish price sentiment that weighed on futures late in the week.

“Lower 48 natural gas production this month hit a once-unthinkable milestone, topping the all-important psychological threshold of 100 Bcf/d for the first time. Volumes have remained at record highs through mid-September, with year-on-year gains expanding to a breathtaking 7-9 Bcf/d above last year at this time,” RBN Energy LLC analyst Sheetal Nasta said.

Still, while the build for the Sept. 16 week lifted inventories to 2,874 Bcf, EIA said stocks remain well below the year-earlier level of 3,071 Bcf and the five-year average of 3,206 Bcf. Continued strong production would help narrow the deficit over the remainder of the injection season, but storage worries could resurface in force if that does not happen.

“U.S. consumption and exports this year have been at record highs. Storage inventories are not only well below year-ago and average levels but are slumping near five-year lows and have struggled to catch up,” Nasta said.

What’s more, aside from maintenance work, little else stands in the way of lofty U.S. liquefied natural gas volumes. Demand from both Asia and Europe is steady as both continents prepare for winter. Europe is especially reliant on American exports of the super-chilled fuel as the continent weans itself off Russian gas amid the Kremlin’s war in Ukraine.

“The rollercoaster ride is far from over as winter beckons,” Allen said. “Storage levels are far below the five-year average and have shown little sign of making up ground despite winter on the horizon.”

NGI’s Spot Gas National Avg. plunged $1.260 to $5.125 on Friday. It fell four out of five sessions over the past week. The one day it steered clear of the red, the national average was flat.

NatGasWeather also anticipated that a tropical storm in the Caribbean will impact demand in coming days. The forecaster said data as of Friday indicated the storm would evolve into Hurricane Hermine as it approaches Florida in the week ahead.