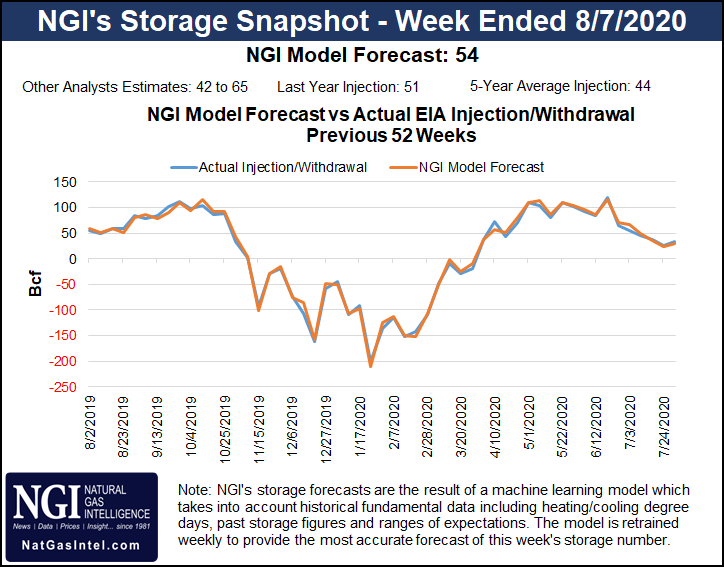 Spot gas prices also softened as much of the heat that had engulfed the East Coast earlier this week was set to subside, leaving only the West with above-normal temperatures. NGI’s Spot Gas National Avg. slipped 4.5 cents to $1.990.

After last week’s surprising rally in the futures market, some volatility in the coming weeks was to be expected. Aiding Wednesday’s reversal, which was much steeper earlier in the day, was a revision in Tuesday’s top-day production estimates, which had pointed to a substantial 2 Bcf/d decline in Lower 48 output from Monday’s levels. Bespoke Weather Services said pipeline data Wednesday morning reflected a bump of more than 1 Bcf/d from Tuesday.

Genscape Inc., however, said its data was still pointing to the lower output, with Lower 48 production down to 86.6 Bcf/d Wednesday from 88.9 Bcf/d Monday. Prior to the drops this week, the Lower 48 production month-to-date average was at 88.1 Bcf/d, it said.

Genscape said the other roughly 800 MMcf/d in dropped production was mostly spread between the Gulf Coast (down 147 MMcf/d), Texas (off 282 MMcf/d), the Midcontinent (down 106 MMcf/d) and the Permian Basin in New Mexico (off 156 MMcf/d), partially because of pipeline maintenance.

Meanwhile, weather data was fairly stable midweek, with “nothing more than a few cosmetic changes,” according to Bespoke. The main theme emerging this month is one with more variability than expected, the firm said, with cooler temperatures last week followed by this week’s heat and another cooler push next week.

This “looks to be followed by, you guessed it, the return of some heat the following week,” Bespoke said. “Adding it all up, we still see the month featuring above-normal demand as a whole, though less extreme than some of our La Niña analogs had suggested,” with above-normal heat likely ruling into September.

The fluctuating forecast, which may have prompted the September contract to bounce off earlier lows since the midday American model added back heat for next week, reignites containment concerns when it comes to storage. With two and a half months still remaining in the traditional injection season, any cooler turn in weather would likely result in heftier storage builds.

That appears to be the case for Thursday’s Energy Information Administration (EIA) report, with the data reflecting last week’s supply/demand dynamics in the face of cooler weather, particularly on the East Coast following Hurricane Isaias. A Bloomberg survey of analyst estimates ranged from a build of 42 Bcf to as high as 65 Bcf, with a median of 56 Bcf. A Reuters poll had a tighter range, and a median injection of 57 Bcf, while a Wall Street Journal poll landed on a build of 56 Bcf. NGI projected a 54 Bcf injection.

This would compare with the 51 Bcf recorded by the EIA last year and the 44 Bcf five-year average.

Looking ahead, additional hurricanes could throw any supply/demand projections off course. From a meteorological standpoint, the Madden Julian Oscillation indicated that the Atlantic Basin may become increasingly active into late August, according to EBW Analytics Group. Furthermore, as seen in the wake of more than two million outages from Isaias, Covid-19 is negatively affecting power restoration, and may heighten tropical storm impacts ahead, the firm said.

Despite the uncertainties, and with prices still firmly above $2.00, EBW said the “effectively repriced” Nymex forward curve “illustrates the staying power of the fundamental reset higher.” Though price volatility, including downside risks, remains likely, the recent market strength has reaffirmed the firm’s confidence in a bullish outlook later in 2020.

That’s largely because of a major shift expected in the supply/demand balance in the coming months as reduced drilling activity is to lower production while winter demand could revive languishing export demand. In the latest Short-Term Energy Outlook, the EIA said it expects year/year production in 2021 to average 4.63 Bcf/d lower year/year.

Meanwhile, a rebound in liquefied natural gas feed gas deliveries could deliver a demand increase of more than 3 Bcf/d. Based on these assumptions, these two supply and demand factors could impact end of summer 2021 inventory levels by 2.1 Tcf, according to Mobius Risk Group.

“As a result, the potential for the market to quickly invert from inventory constraint issues in late 2020 to dire shortages in late 2021” could “create an environment ripe for an increase in both short-term and longer-term volumes,” the Houston-based firm said.

Spot gas prices were mostly lower Wednesday as cooler weather was starting to move across the eastern United States as weather systems and cool shots moved in from the Midwest.

National demand was forecast to continue easing this weekend and next week as weather systems bring heavy showers and thunderstorms and daytime temperatures in the 70s to 80s over East Texas, Midwest, the east-central United States and South, according to NatGasWeather. “This will also act to shift the core of the hot upper heat dome over the West, where highs will reach the 90s and 100s across most states, hottest over California and the Southwest for regionally strong demand.”

Given the heat, SoCal Citygate spot gas climbed 41.5 cents to $3.025, leading to sharp increases farther upstream in the Permian Basin, where Waha jumped 34.5 cents to $1.610.

However, most other markets across the Lower 48 declined.