Traders struggled to put a fair price on natural gas futures Wednesday amid conflicting signals in the United States and overseas. After plunging to a $5.350/MMBtu intraday low, however, a cooler turn in the latest weather models lifted the November Nymex gas futures contract, which settled 8.5 cents higher day/day to $5.590. December climbed 9.0 cents to $5.753. 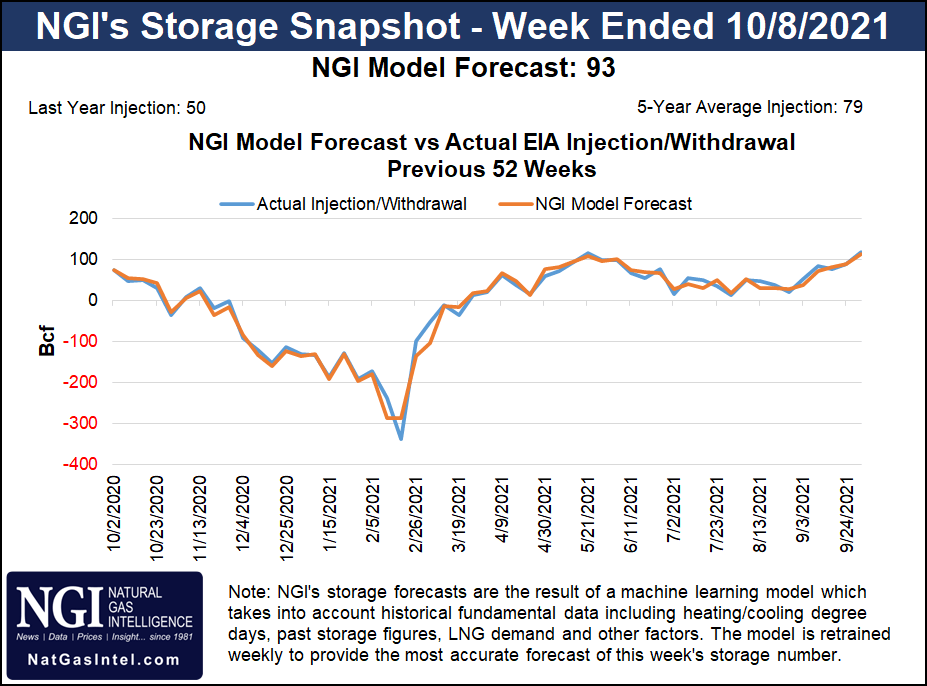 Spot gas prices were a mixed bag amid some chilly weather on the West Coast and mild temperatures in most other regions. NGI’s Spot Gas National Avg. climbed 15.5 cents to $5.285.

Volatility along the Nymex futures strip continued midweek, with a generally warm outlook in the United States portending a continuation of the stout storage injections experienced over the past month. After being poised to dip back into the red, prices strengthened late in the session as the midday run of the American model added demand to the long-range outlook. Prices subsequently soared to a $5.690 intraday high.

Wednesday “was a rather interesting day in the natural gas market in that we saw very clear weather reaction during the midday model runs,” according to Bespoke Weather Services.

After the midday runs trended chillier, adding some heating demand to the forecast, buyers stepped in and pushed the November contract higher. Bespoke noted that gas prices continued to climb post-settle after the European data set also shifted cooler.

Though widespread cold has yet to show on U.S. weather maps, traders have been closely watching each run of the models. Bespoke said the coming pattern “is not exactly impressive, and this month remains on track to be one of, if not the warmest, October in our historical dataset. But, this is enough to push us to neutral, for now, as any additional demand adds overnight could easily send the market higher, even if it is not actually chilly anywhere.”

Overall, light national demand is expected to continue in the near term as widespread highs of 60s to 80s rule most of the United States, according to NatGasWeather. There were some early season weather systems tracking through with rain and snow, the forecaster said, One system was exiting the Mountain West and tracking into the Midwest with highs of 30s to 50s.

A second system was forecast to track into the Northwest, bringing along another round of rain and snow to the Mountain West in the next couple days before moving into the central United States Thursday through Saturday. The system then is expected to produce heavy rains as it feeds off tropical moisture from a cyclone tracking into western Mexico, which could dampen demand in the region.

Maxar’s Weather Desk said the 11- to 15-day outlook leans warmer in the central United States with a positive Eastern Pacific Oscillation in place and a trough remaining over the eastern Pacific. “The feature helps to direct air into North America from a warmer Pacific source region, resulting in above- and much above-normal temperatures in the Rockies, Plains and Midwest.”

The air flow also lends itself to a wetter-than-normal period in the West, according to the Weather Desk. The forecaster said models are in “decent agreement” with the overall pattern themes, but differ in the East. Its official outlook “is a compromise, being near normal here. Confidence is moderate.”

Is The Storage Picture Improving?

With little widespread cold expected to materialize, another three to four weeks of larger-than-normal storage builds appear likely. The Energy Information Administration (EIA) is set to release the next weekly inventory report at 10:30 a.m. ET Thursday.

Injection estimates were wide ranging ahead of the report, with some analysts calling for another triple-digit build. Reuters polled 16 analysts, whose estimates ranged from builds of 85 Bcf to 112 Bcf, with a median injection of 95 Bcf. A Bloomberg survey of 11 analysts produced injections as low as 84 Bcf, with a median 97 Bcf. NGI modeled a 93 Bcf injection.

Mizuho Securities USA LLC’s Robert Yawger, director of Energy Futures, said the EIA’s storage report has had a tendency to come in bigger than expected in recent weeks. Regardless, though, the report “has not even served as a speed bump for runaway train natural gas. After pulling back by as much as 20% in the past week, Thursday may be a different story if the storage number pops for size again.”

U.S. gas prices have shown incredible resilience in the face of otherwise bearish fundamentals. Instead, global factors have dominated trade in the Lower 48, with low storage inventories stoking supply fears in Asia and Europe.

On Tuesday, the Russian Deputy Foreign Minister indicated that PJSC Gazprom was withdrawing from storage to increase exports to Europe. This, however, conflicted with other reports that exports are not likely to increase until early November, after Gazprom achieves end-of-season storage targets.

“It is possible that a nominal increase in Russian exports may soon reach Europe,” said EBW Analytics Group. “In the interim, concerns that Russia is attempting to leverage fast-tracking of Nord Stream 2 may proliferate and drive renewed upward pressure on Title Transfer Facility, potentially lifting Nymex pricing in tandem.”

The only chilly weather in the United States was concentrated in the Pacific Northwest and Rockies, but spot gas prices at the majority of locations quickly pulled back from the prior day’s highs.

There were some locations that continued to climb, however. Stanfield cash was up 12.0 cents to $5.505.

The mixed bag comes as the first widespread snowstorm blanketed the Intermountain West. More than one foot of snow was seen in parts of the northern Rockies, including the higher elevations of Montana and Wyoming, according to AccuWeather. A yardstick was required to measure the accumulation in Pony, MT, where snow totals approached the 30-inch mark in only 24 hours.

The same system responsible for the snow also sent chilly air across the region. No daily record lows were broken, AccuWeather said, but temperatures dipped as much as 15-30 degrees below normal. The mercury in Missoula, MT, dipped to 17 degrees early Tuesday, the lowest temperature there since Feb. 28.

The steep losses occurred as El Paso Natural Gas Pipeline (EPNGP) was set to perform emergency shutdown (ESD) testing Wednesday at its Wink Station. This would shut in capacity in the Wink segment, reducing flows by as much as 403,000 MMBtu/d.

Wood Mackenzie said scheduled nominations on Tuesday (Oct. 12) were 278,234 MMBtu/d. This means actual cuts would likely be less than past 30-day maximum cuts.

The latest maintenance event occurred during a constrained period for Permian production. Nearly 1 Bcf/d of capacity has been constrained for westbound flows at Cornudas on EPNGP following the Aug. 15 explosion on L2000. There also is a .75 Bcf/d constraint for eastbound flows as Gulf Coast Express performs repairs and inspections on the Devils River compressor station through Monday (Oct. 18).

“The Wink segment on EPNGP is located in western Texas and, like Cornudas, flows Permian gas towards Desert Southwest/Western markets,” said Wood Mackenzie analysts Quinn Schulz and Colette Breshears in a note to clients. “Although this constraint will be shorter lived than that of Cornudas, this ESD test will certainly further constrain flows in the short term.”