Like most Fridays, price action along the Nymex futures curve stagnated as traders continued to digest the latest storage and weather data. Volumes also were low with only days to go before the May contract rolls off the board. 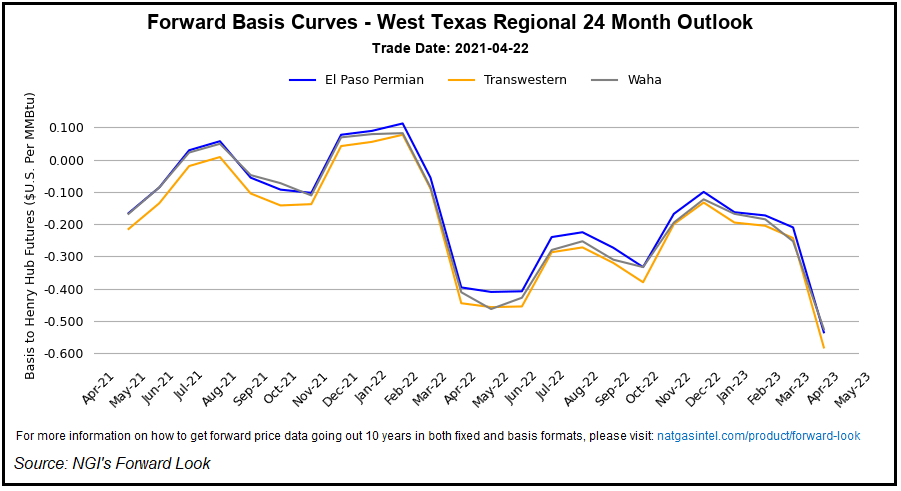 Spot gas prices continued to come off recent peaks in much of the country with the focus turning to the near-perfect weather pattern for the final week of April into early May. NGI’s Spot Gas National Avg. slipped 1.5 cents to $2.570.

Bespoke Weather Services said with the colder weather on the way out, the market can finally close the books on “heating degree day season” and begin looking toward the time when warmth starts bringing a material level of cooling degree days (CDD) into the picture.

“We do not yet see that, as the warmer-than-normal conditions we see coming into the eastern third of the U.S.” through the first week of May is not strong enough to boost demand significantly in the East, Bespoke said. “We will pick up some CDDs in Texas and other parts of the South, but this is typical for the end of April into early May.”

Meanwhile, traders continued to digest the Energy Information Administration’s (EIA) latest storage data. The EIA reported a 38 Bcf injection into inventories for the week ending April 16, which fell well shy of expectations and the year-ago build.

Mobius Risk Group called the EIA figure “remarkably bullish” and said prices could skew higher based on projections for another supportive stat in the next storage report. The firm said the two builds would collectively leave the market to consider the implications of a cumulative injection for the month of April of 200 Bcf or less.

“Sluggish starts to injection season have only been observed at this level or less in two of the past 10 years (2012 and 2018),” said the Mobius team, led by Zane Curry. “Respectively, the 2012 and 2018 injection seasons posted cumulative inventory builds of 1.46 and 1.84 Tcf, and a repeat of something inside this range for the 2021 injection season would guarantee a sub-3.6 Tcf pre-winter inventory level.”

Regionally, the “biggest surprise” from the inventory report was in the Midwest, where a “paltry” 7 Bcf was injected. Mobius said the injection was flat to last year’s comparable week even though temperatures were around 10 degrees warmer this year. Another important data point, it said, was in the salt storage build of 5 Bcf, as this was 11 Bcf lower than the same week last year.

“Taking the weather comps a step further back in time to 2019 shows a terribly similar degree day total for the week ending April 18, 2019, when 92 Bcf was injected,” Mobius said. “By any of these metrics, Thursday’s reported storage build should create concern for those expecting a 3.5 Tcf or greater end-of-October inventory level.”

The firm said it would argue that Thursday’s figure, plus early expectations for a 20-30 Bcf build in the next EIA report, “point to a pre-winter inventory level of 3.3 Tcf or lower.”

Interestingly, a BofA Global Research team recently raised its storage outlook for the end of October to 3.7 Tcf. The analysts, led by Kyle Czirr, cited the quick rise in inventories during March, along with higher production levels that month for their revision.

In particular, production activity has been exceptionally strong in the Haynesville Shale, according to BofA, with completion activity levels nearing EIA Drilling Productivity Report records. At the same time, Northeast producers are doing more with less, they said. Well type curves, after remaining fairly consistent over the last two years, have started to show significant improvement. Permian Basin activity also continues to increase and is getting gassier because of higher Waha gas prices and stronger natural gas liquids pricing.

“Due to increased March inventory levels and higher-than-expected production, we now see a weaker price environment this summer and move our Henry Hub forecast down,” BofA researchers said. “We now expect Henry Hub 2Q2021-4Q2021, currently trading near $2.90/MMBtu, to average $2.75 and Calendar 2022 to average $2.60, roughly 10 cents lower than current forwards.”

Spot gas prices across the country were mostly lower on Friday, with the light demand typically expected over the weekend combining with a rise in temperatures. However, prices out West were stronger, with several pricing hubs notching notable increases as chilly weather, along with the possibility of snow, boosts demand.

AccuWeather said although much of California was in the throes of a significant drought, a short-lived change in the pattern is forecast to occur in the West over the next several days. A series of storm systems was aiming at the Pacific Northwest, with the rain and snow chances extending into Oregon and California by Monday.

After a few dry days during the middle of the upcoming week, yet another opportunity for wet weather could arrive as May begins.

“We are seeing signs that southward undulations in the jet stream will continue to develop over the Pacific Ocean and pivot toward the West Coast,” AccuWeather lead long-range meteorologist Paul Pastelok said.

Most California markets put up similar gains, but the more volatile SoCal Citygate rocketed up 27.0 cents to average $3.745.

The heightened demand on the West Coast spilled over farther upstream in the Permian Basin. Waha spot gas ticked up 2.0 cents to $2.470.