Natural gas futures closed the week lower as the latest storage data — the tightest all summer — was seen as a one-off event amid an otherwise bearish backdrop. With the coming two weeks likely to include only a few days of cool weather, the November Nymex gas futures contract fell 27.7 cents on Friday to $5.410/MMBtu. 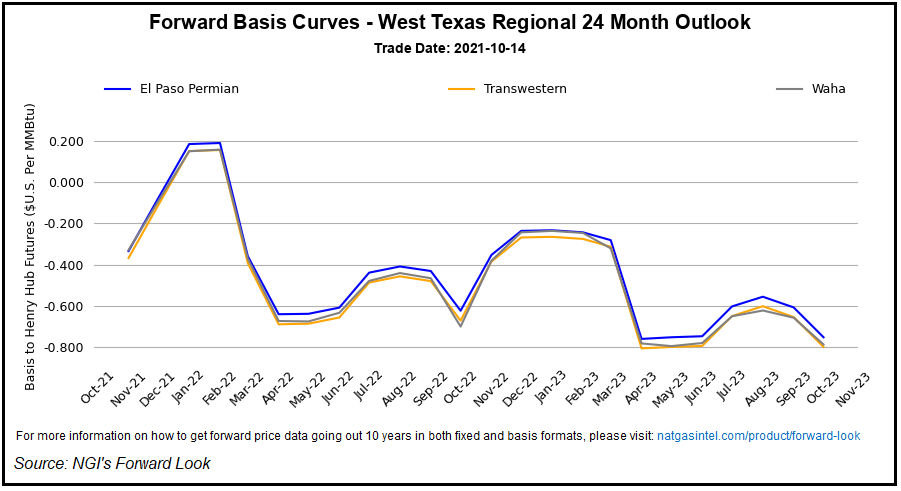 The countdown to winter is on. Inventories were not yet painting a clear picture of where they could land at the end of the injection season, so traders on Friday looked to the weather models for direction on where to close out another volatile week. After some back and forth in the weather models, the latest data showed some cooler air arriving by next Saturday (Oct. 23).

Until then, though, temperatures were expected to be mild. Even when the crisper air arrives, NatGasWeather said the period from Oct. 23-26 may be the only four-day stretch over the next 15 days when demand is forecast to be near normal.

“We continue to look to the end of October and early November for more impressive cold shots into the U.S. but where the overnight data failed to trend any colder,” NatGasWeather said.

The forecaster also pointed out that the longer-range European model favored a warmer-than-normal pattern over much of the Lower 48 into mid-November.

Bespoke Weather Services offered a similar assessment of the data. The firm said the overnight models were “just a tick cooler” and the below-normal demand pattern remains firmly in place overall. The data found more variability into the final third of the month, allowing cooler troughs to swing through the Midwest and East.

There is “no true cold air source’” to tap into, according to Bespoke, as the Pacific side of the pattern remained “very hostile” toward any cold air delivery into the United States. Nonetheless, this was a “notable step change” compared to a couple of days ago.

“We view this as a window of variability,” said Bespoke. The forecaster is still favoring warmer weather to win out heading into early November, “though we will continue monitoring the blocking, as that poses risks to the warm view if it continues to be underplayed by all of the model guidance.”

The longer it takes for cold weather to take hold, the better shape U.S. storage inventories are expected to be in when the winter season is underway. As the latest government data reflected, though, risks remain.

The Energy Information Administration (EIA) said stocks for the week ending Oct. 8 rose by 81 Bcf to 3,369 Bcf. Though the injection trimmed the deficit to year-ago levels by 31 Bcf, the deficit to the five-year average remained intact at 174 Bcf.

Wood Mackenzie analyst Eric Fell said the 81 Bcf injection appeared tight by a whopping 4.0 Bcf/d versus the prior five-year average when compared to degree days and normal seasonality. The latest injection is “a stark contrast” to the previous week, with the weekly total falling by 37 Bcf week/week despite only a slight increase in total degree days.

“Wind was the biggest culprit, with unusually low wind output for the week,” Fell said.

Wind generation tumbled by 23 AGWh and matched the record for the largest week/week decline that was set in June. Weekly wind output was so low for the week that it came in even lower than it did during Winter Storm Uri in February, when a lot of turbines were frozen.

Notably, the wind-driven tightness in the latest storage report is likely to be reversed in the next EIA report as wind generation is seen staging a substantial rebound. “We are on pace to see the largest ever week/week increase in wind generation,” Fell said.

Though mild weather is likely to stick around a bit longer in the Lower 48, weather models were showing some cold air beginning to move into Asia over the next few days, driving up demand in the process.

“This broad region will see temperatures fall below to much-below normal through the one- to five-day period and into the six- to 10-day period as the high lingers,” the Weather Desk said.

Though temperatures are forecast to warm again thereafter, Energy Aspects said its base case is that Asia would need to pull more Atlantic basin liquefied natural gas (LNG) cargoes at the margin from December through February than it has done so far this fall.

The consultancy’s outlook for peak winter Japan Korea Marker (JKM)-Title Transfer Facility (TTF) spreads reflects the economics of shipping spot U.S. LNG to Asia via the Cape of Good Hope. The projections assume congestion appearing at the Panama Canal throughout the period.

“We expect spreads at $4.29 in December, dropping to $3.29 in February 2022, as freight rates start to fall $1.52 above the Chicago Mercantile Exchange’s latest forward curve on average across the period,” Energy Aspects analysts said.

There is some upside, though. The Energy Aspects price forecast takes into account 10-year average temperatures throughout the winter. A colder-than-expected peak winter in Northeast Asia — as suggested by another increase in the probability of a La Niña pattern over the past week — could provide more upside to JKM-TTF spreads, especially toward the end of the season.

Northeast Asian LNG imports could rise by 2.6 million tons (mt) against the firm’s base-case forecast across November-March if temperatures are 10% below the 10-year normal, “and by as much as 0.7 mt (around 10 cargoes) in a single month,” the Energy Aspects team said.

Near-perfect weather across most of the country, even in Texas, drove major losses in the spot gas market on Friday.

The National Weather Service said while the cooler temperatures were not likely to break many (if any) records, daily temperature departures of 10-20 degrees below normal were expected first in the Rockies and the High Plains. The front moving through the Rockies then was expected to quickly push east on Saturday, ushering in drier and more autumn-like temperatures from the Great Lakes to the western Gulf Coast. Most of the East Coast also is to receive a dose of much cooler temperatures by Sunday.

Several locations in the country’s midsection posted sharper declines amid the lack of heating or cooling demand. Consumers Energy cash was down 57.5 cents to $5.080 for the three-day gas period, and Ventura was down 57.0 cents to $4.965.

Markets in the Northeast slid mostly between 50.0 cents and 80.0 cents day/day, and over in the Rockies, Northwest Sumas led the region’s losses with a 69.0-cent decline to $5.490 for gas delivery through Monday.

Cash prices north of the border in Western Canada also tanked despite some pipeline maintenance that would restrict gas flows in the region.

Nova Gas Transmission Ltd. (NGTL) announced that firm transit receipts in the Upstream James River (USJR) region would be cut by 33%, effective Friday and lasting until further notice. The cuts are attributed in part to ongoing maintenance events at both the Berland River 1A compressor station and the Latornell compressor station, according to Wood Mackenzie.

The impacted segments include segments 2, 3, 4, 5, 7, partial 8 and partial 9, including the Aitken Creek, Big Eddy, Groundbirch East, Gordondale and January Creek interconnects. During this time, interruptible transit receipts in the USJR region are to be cut to zero allowable until further notice.

Despite the restrictions, prices across Western Canada buckled on Friday. NOVA/AECO C came off 41.0 cents to average C$4.970/GJ for gas delivery through Monday.