Even with the East Coast buried under several feet of snow, and the potential for more frigid air to arrive by Christmas, natural gas futures fell short Thursday. The January Nymex gas futures contract settled 4.1 cents lower day/day at $2.636/MMBtu after the latest government storage report came in bullish, “just not record bullish.” 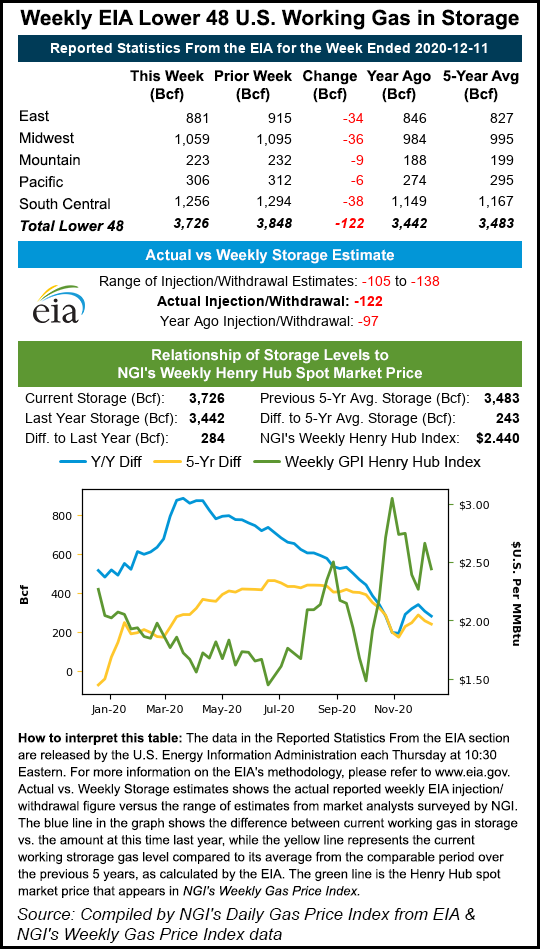 Spot gas prices also retreated across most of the United States, but the Northeast notched the fourth straight day of gains as the Nor’easter that slammed the region beginning midweek was set to linger through the end of the week. NGI’s Spot Gas National Avg. climbed 17.5 cents to $3.560.

After two eerily quiet Nymex trading sessions, the market appeared to be on pins and needles early Thursday. Traders appeared to have lost all confidence in the weather data, given the back-and-forth swings with each model run. Instead, market players were relying on the latest storage inventory report to finally move prices decisively one way or another.

The Energy Information Administration (EIA) reported a 122 Bcf withdrawal from storage inventories for the week ending Dec. 11, which was generally in line with market expectations ahead of the report. However, some estimates pegged the draw to be much larger, with major surveys producing estimates as large as a 138 Bcf draw.

The EIA figure compares with the 97 Bcf decrease recorded in the year-ago period and a five-year average pull of 105 Bcf.

Bespoke Weather Services, which had expected a 115 Bcf withdrawal, said since the actual figure was right in the middle of the range of expectations, it was taking a neutral stance on prices. That said, the EIA stat is “very much reflective of a tight supply/demand balance.

“We expect a much larger draw next week, although thanks to having more weather demand, the balance data does not appear quite as tight for this current week,” Bespoke said.

Broken down by region, the EIA said South Central inventories dropped 38 Bcf during the reference week, including a 25 Bcf pull from nonsalt facilities and a 13 Bcf pull from salts. The Midwest withdrew 36 Bcf, while the East drew 34 Bcf. Inventories in the Mountain and Pacific region each fell by less than 10 Bcf.

Total working gas in storage as of Dec. 11 stood at 3,726 Bcf, 284 Bcf higher than year-ago levels and 243 Bcf above the five-year average, according to EIA.

Bespoke was surprised to see the market sell off following the EIA report, although weather changes are expected to continue holding the most weight moving forward. The American and European models favor more cold air penetrating the Lower 48 around Christmas, but Bespoke said any significant drop in temperatures that may arrive is likely to be temporary.

“Any seasonal-to-cold outcomes from late December through the first half of January may draw a stark contrast to bearish year-ago conditions,” EBW said.

From Christmas through Martin Luther King Jr. Day (Jan. 18), early projections suggest that the market may be 14.2 Bcf/d tighter year/year, according to EBW. If the Madden-Julian Oscillation is stronger than models suggest, it could introduce additional cool risks for the Upper Midwest.

“While winter supply adequacy is not likely to be called into question, bullish storage comparisons could help prompt gains in Nymex futures early next year,” the firm said.

Beyond the winter, export demand is expected to keep prices well supported through the summer. After earlier prognostications that U.S. LNG cargoes could face cancellations as soon as next May, analysts are coming onboard with the theory that higher gas prices in Asia could keep U.S. LNG in the money throughout the summer.

However, Mobius Risk Group pointed out that a forward 60-month strip at around $2.60 is likely insufficient to generate the production growth needed to keep the market balanced over a multi-year period, which as always will carry significant weather risk. Increased exports to Mexico, a “thirsty” natural gas power stack and remarkable LNG export levels suggest supply would need to be “better than flat” from current levels.

“Without clarity on a resurgence in associated gas production, the front of the curve, as well as the back, are arguably undervalued from a fundamental perspective,” Mobius said.

For market observers holding a view that crude prices and subsequent production growth would likely resume before the natural gas market finds itself desperately searching for additional molecules, a sub-$2.75 world is “logical,” according to Mobius.

“It is important to keep in mind that this vantage point has benefited from the fifth warmest start to the winter in the past 70 years,” it said.

In what was otherwise a rather quiet day in the U.S. cash markets, New England pricing hubs broke from the pack as below-freezing temperatures and waist-deep snow blanketed the region.

The National Weather Service (NWS) expected the snow to come to an end Thursday night as the Nor’easter headed out to sea. However, that is not before records were shattered.

The NWS reported “astonishing” snow totals across the interior Northeast, with some locations seeing more than 40 inches of snow. As the storm exits east, a dome of Canadian high pressure was set to build in, leading to a dry and cold stretch of weather through Friday. Overnight temperatures were forecast to range from the 10s to 20s from the Northeast on south into the northern Mid-Atlantic.

“This will lead to refreezes and patchy areas of black ice on untreated roads,” the NWS said. “High temperatures may struggle to get above freezing on Friday and Saturday in locations with deep snowpack.”

By comparison, prices elsewhere in the Northeast started to retreat from recent highs.

Southeast prices also were mixed, with prices barely moving in either direction. A similar story played out in Louisiana, while a couple of market hubs in the Midcontinent slipped as much as a nickel.