Natural gas traders waking up with any neck pain on Friday may have a case of whiplash after Thursday’s wild ride in the futures market. The December Nymex contract, on the first day in the prompt-month position, plunged early to a $3.151 intraday low before screaming back higher to settle at $3.301, up a penny on the day. January closed six-tenths of a cent higher at $3.417. 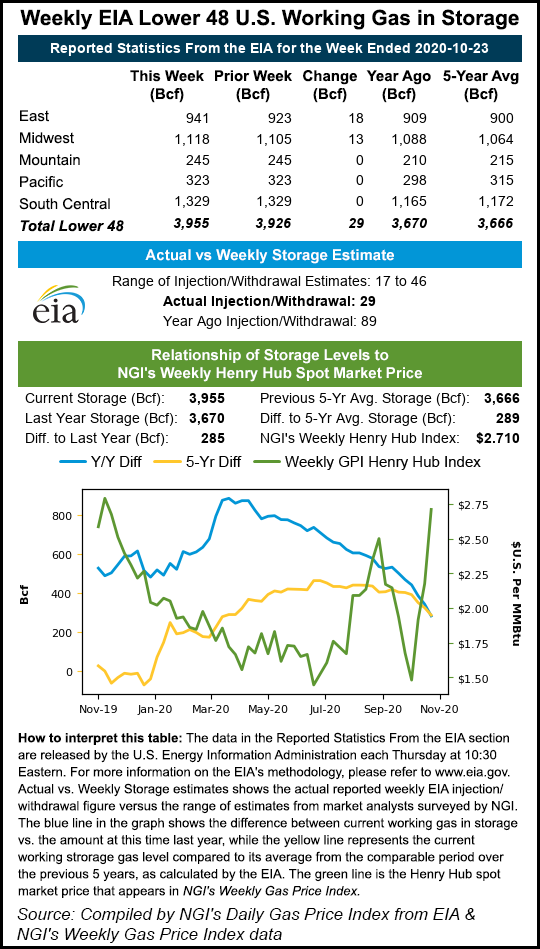 The same could not be said for spot gas, which traded Thursday for gas delivery through Saturday. Small losses were seen across most of the country, but big gains on the East Coast lifted NGI’s Spot Gas National Avg. up 1.5 cents to $3.040.

In a battle between bearish weather outlooks and tighter supply/demand balances, the December Nymex gas futures contract made a big entrance on its first day at the front of the curve. The contract traded in a nearly 20-cent range before settling near the high end.

The early losses largely were because of further confirmation that after next week’s cold blasts, a warmer regime would settle over the United States, particularly in the higher demand regions like the Northeast. The midday Global Forecast System trended even milder for the Nov. 8-12 period, according to NatGasWeather.

In addition to Gulf of Mexico shut-ins, including about 45% of natural gas, Genscape estimated output declines this week in Texas, the Midcontinent and the New Mexico portion of the Permian. Gains on Thursday were centered in Texas (up 587 MMcf/d) and in the Permian New Mexico (up 787 MMcf/d), according to Garcia.

On the bullish side, the latest government storage inventory report surprised the market when it reported a much smaller-than-expected 29 Bcf injection. Ahead of the report, injection estimates ranged from 17 Bcf to 46 Bcf, though many surveys had reached a consensus of a build in the upper 30s Bcf.

Bespoke Weather Services chief analyst Brian Lovern said the 29 Bcf injection is a “notably tighter” number than expected in terms of supply/demand balances. For now, the higher prices have not materially impacted demand.

At some point, some impacts should be seen, according to Lovern, although he noted that liquefied natural gas (LNG) demand is stronger this week. “In short, it is a bullish report, and any turn back supportive in the weather will lead to higher prices rather easily.”

Participants on The Desk’s online chat Enelyst pointed out “all those eggs” in the data. The EIA showed no week/week net change in inventories in the Mountain, Pacific and South Central regions. The South Central reported a surprise 1 Bcf draw from nonsalt facilities, while salts reported no change.

“That surplus is getting worked off in a hurry,” said Enelyst managing director Het Shah.

The Energy Authority’s Mike Zaccardi, market research analyst, said he is seeing daily withdrawals from storage. However, an upcoming mild spell “should keep storage around the 3.95 Tcf level before dropping off a bit come end-of-season time.” Zeta avoided the LNG export facilities “nicely” and foreign gas prices are on the rise.

The tropics could still be a future storm issue, according to Zaccardi. “We’ll see what happens. We could have Eta late next week.”

As NGI previously reported, the Atlantic hurricane season has gone through every name on the list of storm names for 2020. Zeta was the sixth name using the Greek alphabet. The NHC reached the sixth Greek letter previously one time, in 2005.

As for where gas prices could head next, ICAP Technical Analysis’ Brian Larose pegged $3.362-3.370-3.404 as the immediate challenge for the bulls. If they were to better this area of contention, his next objective would become $3.593-3.614.

Spot gas prices were lower Thursday, weighed down in part by the typical weekend discount that influences prices. Trading on Thursday was for gas being delivered on Friday and Saturday, since the end of the month falls on a weekend.

Returning production in the Permian quickly squashed the recent rally at Waha, which tumbled $1.025 day/day to $1.880. Other Texas points also slid into the red. Tres Palacios spot gas dropped 8.5 cents to $2.960.

Benchmark Henry Hub was down 6.0 cents to $3.000, while farther southeast, Transco Zone 5 was down 12.5 cents to $2.910. Genscape’s Garcia noted that despite its close proximity to Appalachia market hubs, Transco Zone 5 tends to track more closely with Henry Hub since much of its supply comes from the Gulf Coast via Zone 4 imports.

Northeast prices, however, continued to tack on gains as temperatures in the region were set to tumble. After reaching levels not seen since last winter on Wednesday, Algonquin Citygate rocketed another $1.700 higher on Thursday to average $6.535.

“New England weather-based demand and their corresponding price hubs have been trending bullishly since mid-month,” said Genscape’s Garcia. “Maintenance on Algonquin Gas Transmission’s Mainline and a cold front over this weekend have added to this bullish pressure.”

On the West Coast, prices moved lower. In the Rockies, Opal was down 18.5 cents to $3.135. Similarly steep declines were seen in California.