Choppy trading continued along the Nymex natural gas futures curve on Thursday, with steep losses accrued early in the session amid a broader decline in equities and commodity markets. The September contract managed to bounce later in the day, though, as traders mostly turned a blind eye to hugely bearish storage data. The prompt month settled at $3.830, off 2.2 cents day/day. October fell 2.2 cents to $3.844. 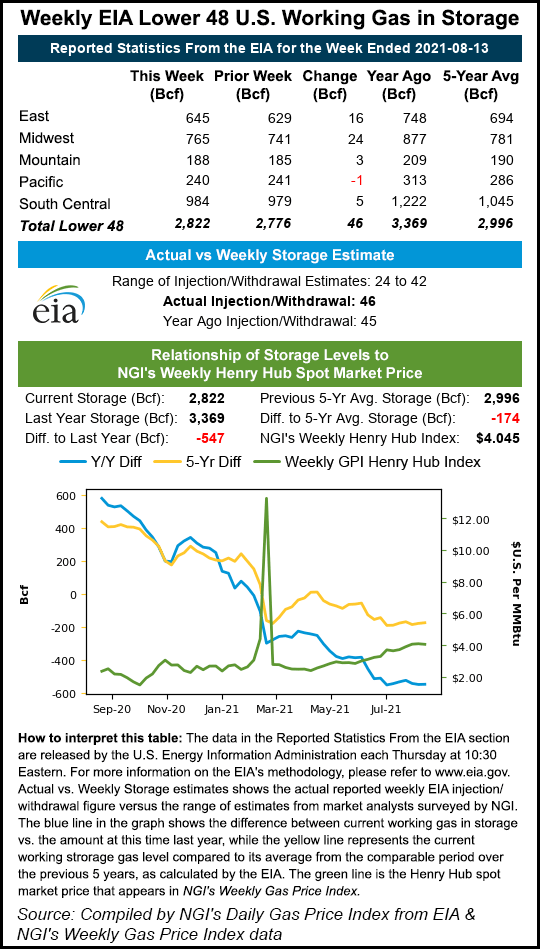 Thursday’s trading action appeared all but certain early in the session. The September contract plunged as much as 11.8 cents from Wednesday’s close as fears that the Delta variant of the Covid-19 virus would stall the economic recovery rattled equity and oil markets. After holding steadily above $65/bbl, West Texas Intermediate oil prices tumbled to around $63 on Thursday.

Oxford Economics said although economic momentum remains strong, contractions in five of the six subcomponents it tracks signal that gains may be harder to come by as it moves past peak growth.

“New Covid-19 cases have surged to 138,000/day and hospitalizations and deaths have risen since early August,” said Oxford Economics’ Gregory Daco, chief U.S. economist. “While a significant deterioration in the health situation is a downside risk to our outlook, rising inoculation rates offer protection against severe Covid cases and a new economic downturn. The U.S. is administering roughly 720,000 vaccine doses every day, a 36% increase from mid-July and 66% of the adult population is now fully inoculated.”

EBW Analytics Group shared a similar view. The firm said there may be more downside risk for oil if the stock market continues to plunge or the dollar strengthens. However, if the new Covid-19 case rate begins to level off, oil prices could stabilize. Furthermore, with a “significantly higher” vaccination rate in the United States and Europe possible in the next month and a half, global economic growth could reignite.

With the supply/demand backdrop remaining firmly bullish for the gas market, any additional price declines — oil-related or otherwise — would present buying opportunities. Robust export demand and strong power burns this summer have left storage operators struggling to replenish inventories ahead of the winter.

The Energy Information Administration (EIA) on Thursday provided some welcome news on the inventory front, but failed to alter the bigger picture. The agency said U.S. stocks rose by a much-larger-than-expected 46 Bcf for the week ending Aug. 13.

The EIA data included a reclassification from base gas that resulted in a 4 Bcf increase to working gas in the South Central’s nonsalt facilities. The region recorded a net increase of 5 Bcf, which also included a 3 Bcf withdrawal from salts.

Implied flows were 42 Bcf, which was the highest estimate ahead of the EIA report. Projections were wide ranging and as low as 9 Bcf.

Broken down by region, the Midwest reported a 24 Bcf injection into inventories, and the East added 16 Bcf, EIA said. Mountain stocks rose by 3 Bcf, while the Pacific withdrew 1 Bcf.

Total working gas in storage reached 2,822 Bcf, which is 547 Bcf below year-ago levels and 174 Bcf below the five-year average, according to EIA.

Bespoke Weather Services said the latest storage figure was “pretty hideous,” but “the big loosening” reflected in the data “shouldn’t stick.” That’s because U.S. storage facilities have likely run out of time to refill stocks to comfortable levels ahead of winter. The firm still expects inventories to sit below 3.5 Tcf at the end of October. At the same time, export demand, both via pipeline and liquefied natural gas continues to be rampant outside of maintenance events.

That could change, at least temporarily, in the near term. Hurricane Grace made landfall early Thursday near the resort town of Tulum, Mexico. The storm downgraded as it crossed over the Yucatán Peninsula. However, Grace is expected to regain hurricane status before it makes a second landfall on the mainland coast of Mexico late Friday or early Saturday, according to the National Hurricane Center (NHC).

Wood Mackenzie analyst Ricardo Facon told NGI that so far, Grace was not causing direct impacts on Mexican natural gas fundamentals. There was no significant gas supply at risk in the Yucatán, and regional demand was substantial.

However, Wood Mackenzie is monitoring potential impacts in the coming days. Falcon said  there may be some downside to demand as well as temporary system imbalances. This would be because of weaker power/industrial burns or storm-induced damages to infrastructure.

“But much will depend on how strong Grace becomes when it hits Mexican land again and how close it gets to major gas supply-demand hotspots in central Mexico and along the Gulf of Mexico corridor,” Falcon said.

The analyst noted the resilience of power/industrial gas demand in 2020, even when hurricanes as strong as Category (Cat) 4 storms made landfall or were close to Mexican coasts. Of all the storms, only Hurricane Zeta, a Cat 2 storm, produced a sizable decline in the corresponding impact zone, the Yucatán Peninsula.

“We reckon that, in such an atypical year, other factors contributed to that endurance, such as the gradual easing of Covid-19 restrictions and record-high (or near record-high) summer temperatures,” Falcon said.

Meanwhile, the northeastern United States was keeping a watchful eye on Tropical Storm Henri. Though expected to remain far offshore the East Coast the next couple of days, the storm was forecast to reach hurricane status by Friday and approach southern New England on Sunday and Monday. This may trigger heavy downpours over portions of the region.

Spot gas remained weak on Thursday, with prices slipping a little deeper into the red at the majority of U.S. pricing hubs. California markets posted the steepest declines for a second day as several thousand customers in the northern part of the state remained without power.

Power was turned off to PG&E customers mostly in Northern California’s Butte, Napa, Shasta, and Tehama counties as a safety precaution because of dry, gusty offshore winds that elevated the risk of wildfires.