Supported by government storage data that came in on the bullish side of estimates, natural gas futures recovered some of their recent losses Thursday, though mild weather and coronavirus impacts continue to weigh on the near-term price outlook. The April Nymex futures contract picked up 5.0 cents to settle at $1.654/MMBtu. 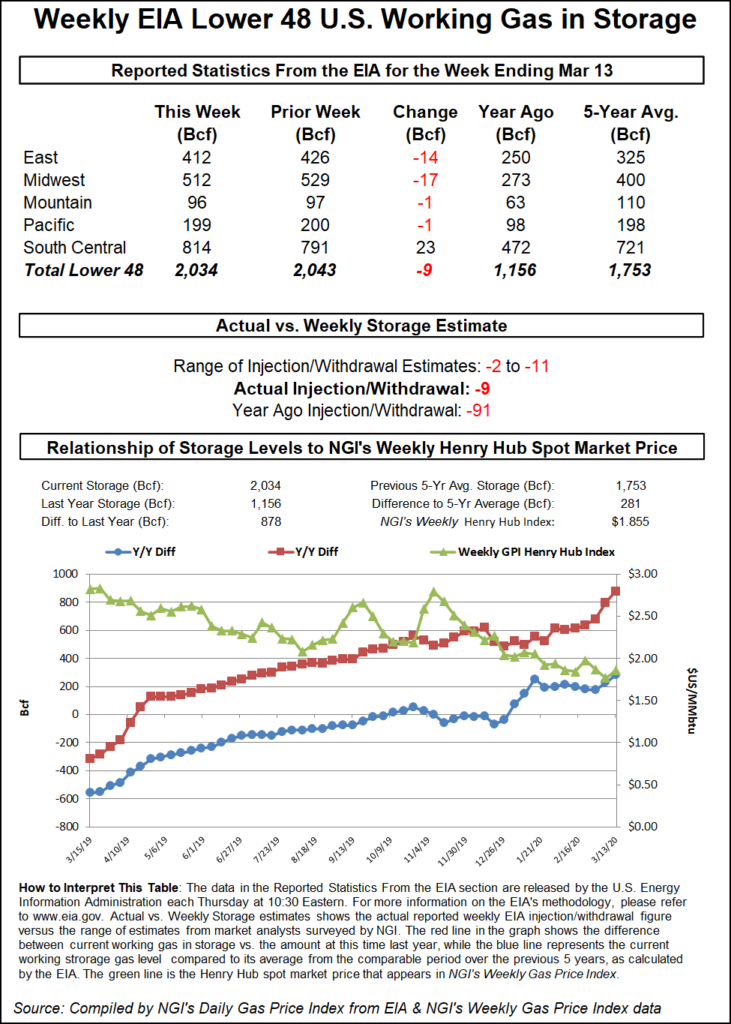 In the spot market, price adjustments were mixed, with gains in the Rockies and Midcontinent countered by discounts in the Northeast; NGI’s Spot Gas National Avg. added 1.5 cents to $1.490.

The Energy Information Administration (EIA) on Thursday reported a larger-than-expected 9 Bcf weekly withdrawal from U.S. natural gas stocks. The 9 Bcf withdrawal, while to the bullish side of consensus, falls well short of both the 91 Bcf withdrawal EIA recorded for the year-ago period and the five-year average pull of 63 Bcf.

Prior to the report, a Bloomberg survey showed a median estimate for a 3 Bcf withdrawal, while a Reuters poll landed on a consensus pull of 6 Bcf. Estimates ranged from minus 2 Bcf to minus 11 Bcf. NGI’s model predicted a 1 Bcf withdrawal.

The market is likely to take a greater interest in upcoming EIA reports as traders look for clues of the impact of coronavirus containment measures on demand, according to Bespoke Weather Services.

“This number is not as tight as many that we saw over the last several weeks,” Bespoke said. However, the figure is also “not related to any slowdown in the economy due to the virus, as last week was before we began to see shutdowns.

“Numbers the next few weeks will be more useful in determining how much demand loss is actually taking place,” and upcoming reports will likely “carry more weight in terms of market impact.”

Trying to grapple with the potential effects of the coronavirus on natural gas, analysts at Tudor, Pickering, Holt & Co. (TPH) are looking back to the Great Recession as an analog.

“With various segments of the economy going into effective shut-down, a recession is looking increasingly probable and, using 2008/09 as a proxy, we expect recessionary impacts on natural gas demand to be in the order of 4 Bcf/d,” the TPH analysts said. “In 2009, as the market went into recession in the wake of the 2008 financial crisis, industrial demand saw a 8% year/year drop (equal to about 2 Bcf/d in 2020), while power and residential/commercial saw negligible impacts (with conveniently similar degree days).”

However, there could be impacts to power burns that are “unique to the current situation” as employees work from home and demand from commercial and retail spaces falls, according to the firm. Given a potential 2 Bcf/d of impact to power generation and an expected decline in U.S. liquefied natural gas export utilization through the second quarter, “the near-term total demand loss could be staggering.”

On the plus side for bulls, associated gas volumes should “fall materially” through the end of the year, on top of cuts to gas-directed volumes driven by near-term price weakness, the TPH analysts said.

This has the setup for prices looking “very strong” heading into 2021, they said. “As a result, while the front end of the curve likely goes sub $1.50, support for the back end continues to rise, and we think pricing of $2.75-plus is in the cards.”

As for the latest weather outlook, NatGasWeather continued to call for a cold front to move from Canada into the central and northern United States this weekend and into Monday, with the pattern looking “much too warm” from the middle of next week through early April.

“As such, bearish weather sentiment should be expected after this weekend cold shot exits unless there were to be much colder trends,” the forecaster said.

The National Weather Service’s (NWS) short-range forecast Thursday called for “quite the temperature divide” to develop between the western and eastern portions of the country, including highs around 10-20 degrees below normal for the Northern High Plains and for California and the Southwest.

“East of there, warmth will be widespread, with temperatures 10-25 degrees above normal for the Mississippi Valley to much of the Eastern Seaboard,” the NWS said. “Widespread record temperatures, particularly record high minimum temperatures, are expected over the next couple of days in the central and eastern U.S.”

Prices strengthened from the Rockies into the Midcontinent Thursday. Cheyenne Hub picked up 7.0 cents to $1.445, while Northern Natural Ventura climbed 7.5 cents to $1.535.

Meanwhile, Northeast hubs posted some of the largest discounts across the country Thursday. Transco Zone 6 non-NY dropped 7.5 cents to $1.250.

A force majeure on Line 25 on the Texas Eastern Transmission (Tetco) system declared late last week due to an unplanned outage between Berne, OH, and Holbrook, PA, has been extended into mid-April, according to Genscape Inc. analyst Josh Garcia.

“Capacity through the Berne 30-inch line has been reduced by 130 MMcf/d, but flows have fallen an average of 167 MMcf/d since the force majeure was declared,” Garcia said. “Between this constraint and ongoing maintenance on M-2’s western 26-inch line from Sarahsville to Lebanon, much production has rerouted” from the M-2 zone to Columbia Gas.

Elsewhere, East Texas prices pared some of their losses from the previous session. After tumbling 19.0 cents in Wednesday’s trading, Katy gained back 3.0 cents to average $1.580.