Natural gas futures bulls gained back some ground Friday after taking it on the chin earlier in the week, even as a slight bearish miss from government storage data appeared to offer little in the way of support. 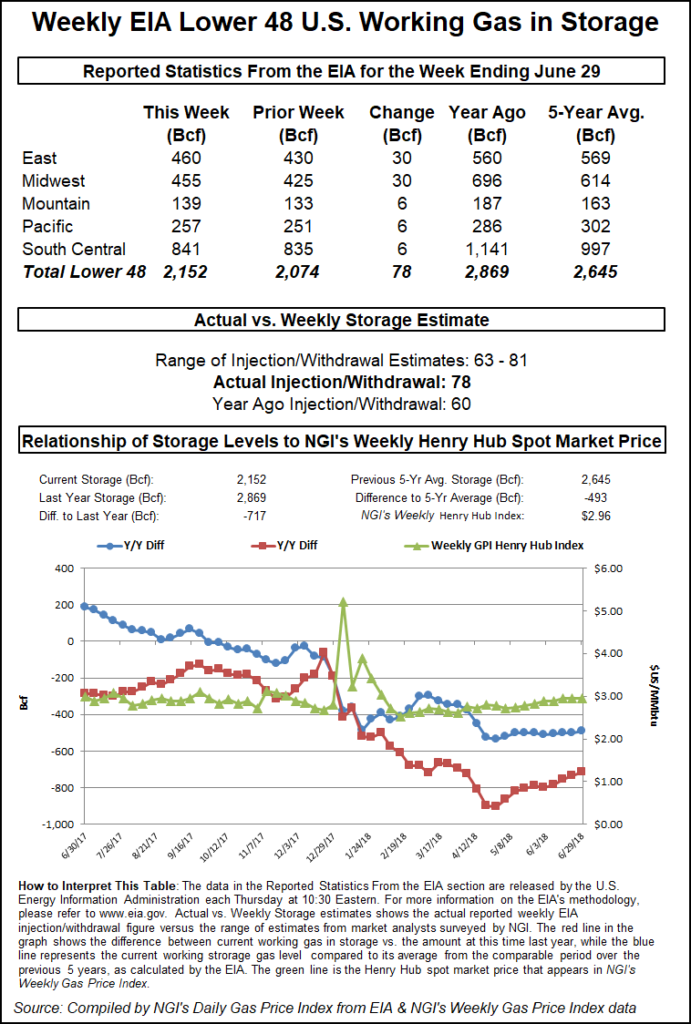 Spot prices for weekend and Monday delivery saw heavy declines across much of the Lower 48; points in Southern California pulled back as a heat wave in the region was expected to moderate somewhat over the weekend, while cooler conditions drove discounts in the East. The NGI National Spot Gas Average fell 12 cents to $2.60/MMBtu.

“We have seen power burns begin to tighten again at these lower price levels, yet production at record levels continues to limit the impact of any tighter weather-adjusted demand and pressure the entire natural gas strip,” Bespoke said. “…A much weaker fall and winter strip reflects just how overwhelming production is expected to be, and with cool risks likely arising into the final third of July that would only be expected to put $2.75 in play sooner.

“…Tight power burns and low storage levels have helped keep the front of the strip bid for now, with medium-term intense heat also helping, but as soon as a more sustained cooler pattern looks likely we would see $2.75 tested, likely next week.”

Bulls hoping for a lean natural gas storage report from the EIA Friday left disappointed as it reported a net build on the higher side of average estimates. Still, futures prices stayed the course after briefly dropping on the news.

EIA, issuing its weekly report a day later than usual because of the Independence Day holiday, said Lower 48 natural gas stocks saw a net 78 Bcf build for the week ending June 29, versus a 60 Bcf injection recorded a year-ago and a five-year average 70 Bcf build.

The number also topped major survey averages by around 3 Bcf, a reversal from the prior week’s bullish miss (although that report also included a bearish revision to stocks for the week ended June 15).

Analysts with Jefferies LLC said Friday a return to the five-year average storage level “is unlikely this summer, as production would likely need to average around 9.5 Bcf/d higher year/year (y/y) to reach 3.8 Tcf.

“…U.S. natural gas production reached 80 Bcf/d for the first time in late June and has maintained this level for eight of the past nine days,” the Jefferies team said. “June production averaged 78.7 Bcf/d, up 0.6 Bcf/d sequentially and up 6.7 Bcf/d y/y.”

Appalachian production has increased about 0.5 Bcf/d from late June to early July, while Permian Basin natural gas output has remained flattish since March at around 7.1-7.2 Bcf/d, according to the firm.

“If production continues at the same y/y growth rate as June for the remainder of the refill season, we estimate that the season will end with storage at 3.4 Tcf (about 9% below average),” the Jefferies team said. “For storage to reach 3.8 Tcf, we estimate that production would need to average 9.5 Bcf/d higher y/y for the remainder of the refill season (this would imply production averaging 82.3 Bcf/d, well above current levels).

“In these scenarios, we assume power demand of plus 2.0 Bcf/d y/y, hold exports flat with recent levels and assume no y/y changes in residential/commercial or industrial demand,” according to the analysts. “The current storage level could lead to higher near-term natural gas prices, as a higher price will be needed to incentivize more power generation to switch back to coal and allow more gas to flow into storage.”

Turning to the spot market, prices sold off sharply across much of the Lower 48 heading into the weekend. Southern California prices pulled back after spiking Thursday in response to a triple-digit heat wave that was expected to ease somewhat by next week. In the East, cooler forecasts for the weekend tempered buyers’ interest in three-day deals.

After adding more than $4 day/day Thursday, SoCal Citygate gave back $2.87 Friday to head into the weekend averaging $5.41, still a substantial premium to surrounding locations. The price spikes for SoCal Citygate likely came as no surprise to those that have been watching the volatile trading point closely, as a heat wave moving into the region Friday put the supply-constrained Southern California Gas Co. (SoCalGas) system to the test.

Radiant Solutions forecast Friday’s high in Burbank, CA, to reach 110 degrees, with average temperatures around 18.5 degrees hotter than normal. Saturday’s high was expected to again reach triple digits at 103, with highs expected to fall back into the 90s by Sunday and Monday.

In the Northeast and Appalachia, calls for less intimidating temperatures along the East Coast over the weekend helped the put the chill on spot prices. Radiant Solutions was calling for highs in the upper 70s and 80s in Boston and New York City over the weekend, a reprieve from a recent stretch of temperatures consistently climbing into the 90s in the East.

Prices also weakened Friday across the Midwest, where Radiant was calling for temperatures over the weekend to hover around normal or slightly below normal in cities like Chicago and St. Louis. The declines included a 9-cent drop at Chicago Citygate, which averaged $2.61. In the Midcontinent, NGPL Midcontinent finished 11 cents lower at $2.39.

Beginning Monday and extending through July 24, Natural Gas Pipeline Co. of America’s (NGPL) Segment 17 in Cass County, TX, in its TexOK Zone could see capacity restrictions because of maintenance, according to Genscape Inc. analyst Vanessa Witte.

“This could restrict firm transports into Segments 26 and 27 during this time,” Witte said. “Segment 17 flow, taken at ”AG Line-Texas Segment,’ has averaged 350 MMcf/d over the prior 30 days, with a max of 456 MMcf/d. Northbound flow on Segment 27 has averaged only 62 MMcf/d, while southbound flow onto Segment 26 has averaged 990 MMcf/d.”