The Energy Information Administration (EIA) reported a 33 Bcf withdrawal from storage inventories for the week ending April 1, a larger-than-expected pull. 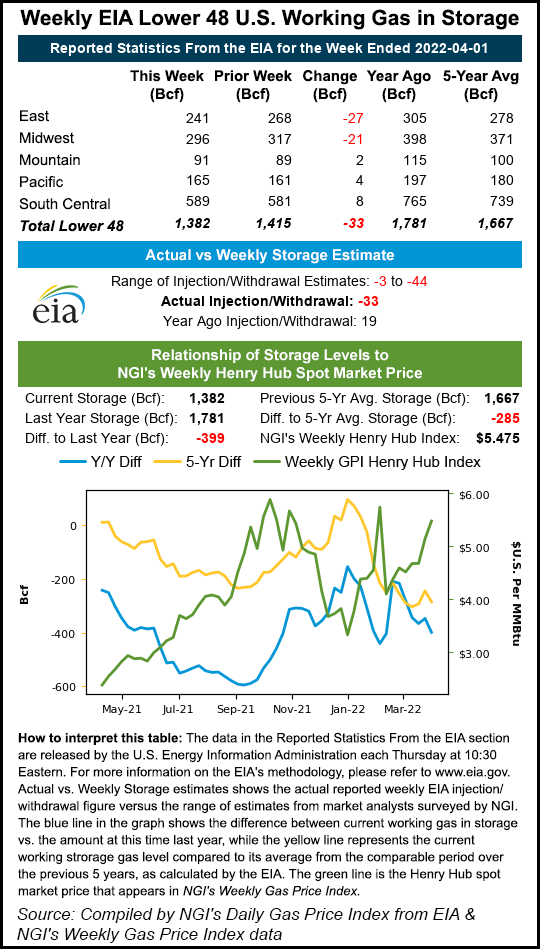 The storage figures announced Thursday closed the curtain on the traditional withdrawal season, leaving stocks below historical levels. The news reignited momentum that bulls had lost early in Thursday’s trading session and on Wednesday.

“Low number for storage…going to be an interesting summer,” said one participant on The Desk’s online energy chat Enelyst. “Not the number you want to see if you are in the big spring injection camp,” said another participant.

The EIA’s 33 Bcf withdrawal was well within the range of expectations ahead of this week’s report. However, several Enelyst participants noted that their projections were revised higher in recent days. Enelyst managing director Het Shah said power burns were high throughout March. Still, given the transition into spring from winter, accurately forecasting the impact on storage may be difficult.

A Bloomberg survey of seven analysts on Wednesday showed withdrawal estimates from 17 Bcf to 36 Bcf, with a median draw of 27 Bcf. Reuters polled 15 analysts, whose estimates ranged from withdrawals of 3 Bcf to 44 Bcf, with a median decline of 26 Bcf. A tighter range of projections in a Wall Street Journal poll averaged at a pull of 28 Bcf.

Last year, 19 Bcf was injected into storage during the similar week, while the five-year average is a build of 8 Bcf.

Broken down by region, East stocks fell by 27 Bcf, and Midwest inventories dropped 21 Bcf, according to EIA. South Central inventories climbed a net 8 Bcf, split evenly between nonsalt and salt facilities. The Pacific and Mountain regions each added less than 5 Bcf.

Total working gas in storage as of April 1 stood at 1,382 Bcf, which is 399 Bcf less than last year at this time and 285 Bcf below the five-year average, EIA said.

Looking ahead to EIA’s next inventory report, market observers expect injections to resume despite some lingering chilly weather this week. Wind generation also is strong. Early estimates among Enelyst participants pointed to a build ranging from the teens to as much as 30 Bcf.