Given so many moving targets in the natural gas market these days, it doesn’t take much to move the price needle. After the latest storage stat came in below some estimates, the June Nymex gas futures contract jumped 8.0 cents to settle Thursday at $1.949. July futures climbed 7.9 cents to $2.170. 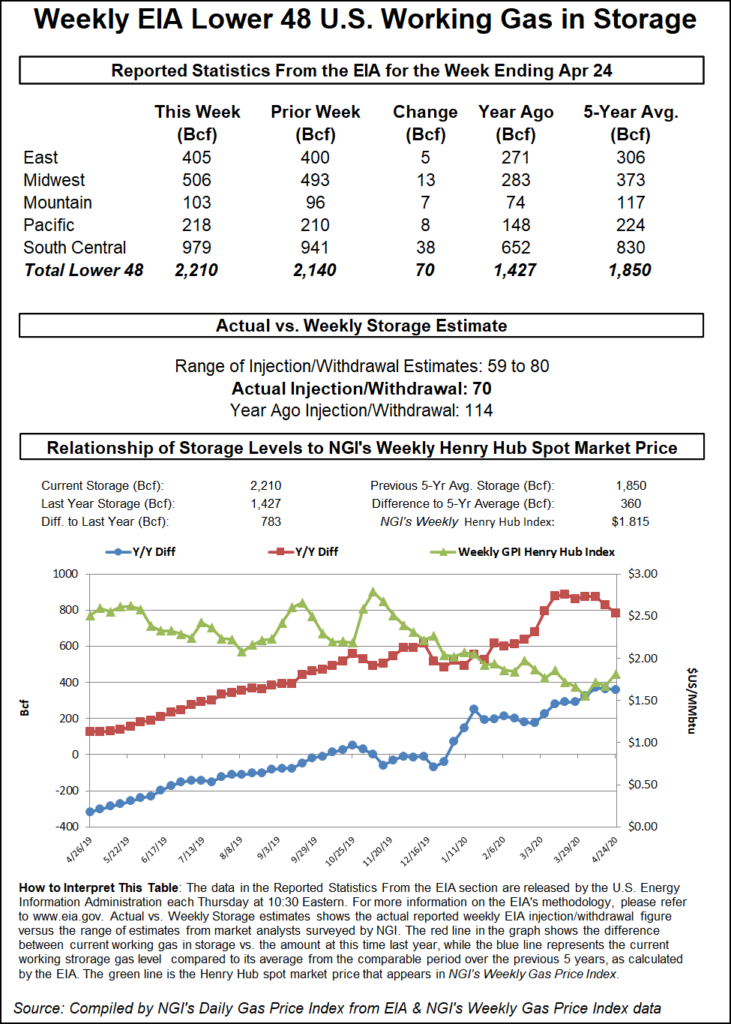 Cash continued to fall across most of the United States, sending NGI’s Spot Gas National Avg. down 5.0 cents to $1.565.

Despite the low gas price environment, erratic price moves have been prevalent given all of the uncertainties surrounding the coronavirus and the oil market downturn. There are some positive drivers for natural gas, with Lower 48 production well off late-November highs and more cuts ahead.

However, Bespoke Weather Services said until there is a significant gain in demand via a reopening of the economy in the wake of Covid-19, the production story is bullish further out the curve toward winter. Liquefied natural gas (LNG) exports also face rough waters.

“The problem is the market sees how wide spreads are, at historically wide levels, and is reluctant to let the front fall too much relative to winter at this stage in the game,” Bespoke senior meteorologist Brian Lovern said. “That is fine for now, but with risks of LNG curtailments that can negate some of the production declines, and demand still struggling here and now, we would not be surprised if spreads ultimately widen more yet.”

Indeed, the next few weeks are typically a low demand period anyway as most eastern U.S. markets are thawing from winter and southern markets still await significant heat.

Weather forecaster DTN’s Week 4 forecast calls for near-normal temperatures nationally, with mild warmth in the western United States balanced by seasonal to cool anomalies east of the Rockies. The outlook portends a decline in natural gas demand by 0.5 Bcf/d week/week, “just shy of the anticipated seasonal nadir for the storage week ending May 29,” according to EBW Analytics Group.

Still, total demand may pick up ahead of the seasonal lows in late May as the economy slowly begins to reopen, EBW said. Weather in the United States and abroad will play a critical role as the market pushes forward into summer, but the firm said the key near-term issue remaining is the “balancing act” between plummeting associated gas supply and the sharp virus-induced drop-off in structural gas demand.

On the supply side, EBW said the sharp contraction in associated gas may catch the market by surprise and briefly give bulls the upper hand as production falls 4.0-5.0 Bcf/d from March levels. Nevertheless, “current projections show May may feature the largest monthly injection on record, and add well over 100 Bcf to the year/year surplus.”

On Thursday, the Energy Information Administration (EIA) reported an on-target 70 Bcf injection into storage inventories for the week ending April 24. The reported build compares with last year’s 114 Bcf injection for the similar week and the five-year average build of 74 Bcf, according to EIA.

For the second week in a row, the EIA figure came close to market estimates ahead of the report, a potential indication of a firmer grasp on the amount of demand loss stemming from the coronavirus. However, some estimates were calling for a much higher 80 Bcf build.

Broken down by region, the South Central reported a slightly higher-than-expected 38 Bcf injection into inventories, including a 24 Bcf build into nonsalt facilities and a 13 Bcf add in salts, according to EIA.

Market observers on The Desk’s Enelyst.com energy platform attributed the hefty South Central storage build to production declines in the region that aren’t fully captured because of the “Texas black box” of intrastate pipelines.

“I think production is falling more than we can see,” said Genscape Inc. senior natural gas analyst Eric Fell. “There is a lot of liquids-rich production in Texas, Oklahoma and New Mexico that is behind intrastate pipes…There are no signs that demand has begun rebounding as of last week.”

The EIA said Midwest inventories grew by 13 Bcf, while the Pacific region added 8 Bcf and the East added 5 Bcf.

Following Thursday’s rally, Bespoke moved sentiment back to “slightly bearish” for the near term, since the firm views enough bearish forces in play to allow for more risk of a pullback at the front of the curve, “as opposed to taking another leg higher.”

Spot gas markets continued to bleed out Thursday as mostly moderate temperatures remained in the forecast for the next several days.

NatGasWeather showed showers extending from the Northeast to the Southeast, but only “a touch cool.” Temperatures were to remain hot across the Southwest with highs of 90s and 100s for early-season cooling demand.

“It would be more impressive if not for near ideal highs of 70s to lower 80s over the South and Southeast,” NatGasWeather said.

However, the heat was enough to boost next-day gas prices in the Rockies and California. Northwest S. of Green River cash climbed 5.5 cents to $1.495, and PG&E Citygate rose 7.5 cents to $2.460.

Northeast markets came off hard given the only slightly cool forecast for the region. Transco Zone 6 NY cash dropped 14.0 cents to $1.405.

In Appalachia, the majority of markets posted losses of less than a dime, but points along Texas Eastern Transmission (Tetco) fell harder amid several maintenance events along the system. Texas Eastern M-3, Delivery next-day gas tumbled 12.5 cents to $1.440.

Meanwhile, Tetco also declared a force majeure from an unplanned outage on Line 10 between its Berne, OH, and Holbrook, PA, compressor stations, only five days after one on Line 25 between the same two compressors was lifted, Garcia said.

“The notice specifically states that as a result, North to South capacity through Berne will be set to 1.51 Bcf/d, which is unusual as a normal operating capacity is reported as 1.28 Bcf/d, meaning capacity has been raised by the force majeure.” Furthermore, scheduled flows through Berne are much higher than operating capacity regardless, averaging 2.06 Bcf/d over the last month, according to Genscape data.

“Reported operating capacity has not been changed at the time of writing, although flows through Berne and the Berne 30-inch line fell by 204 MMcf/d day/day,” Garcia said. Although there is no estimated date of a return to service, the last force majeure on this segment was first declared on March 13 and lasted about six weeks.

Also of note, a farewell is in order for Entergy Corp.’s 1,100 MW Indian Point nuclear generating facility. The New York facility was set to retire Thursday (April 30). The move is said to reduce the amount of zero-emissions power consumed in downstate New York and increase demand for gas-fired plants in the short run.