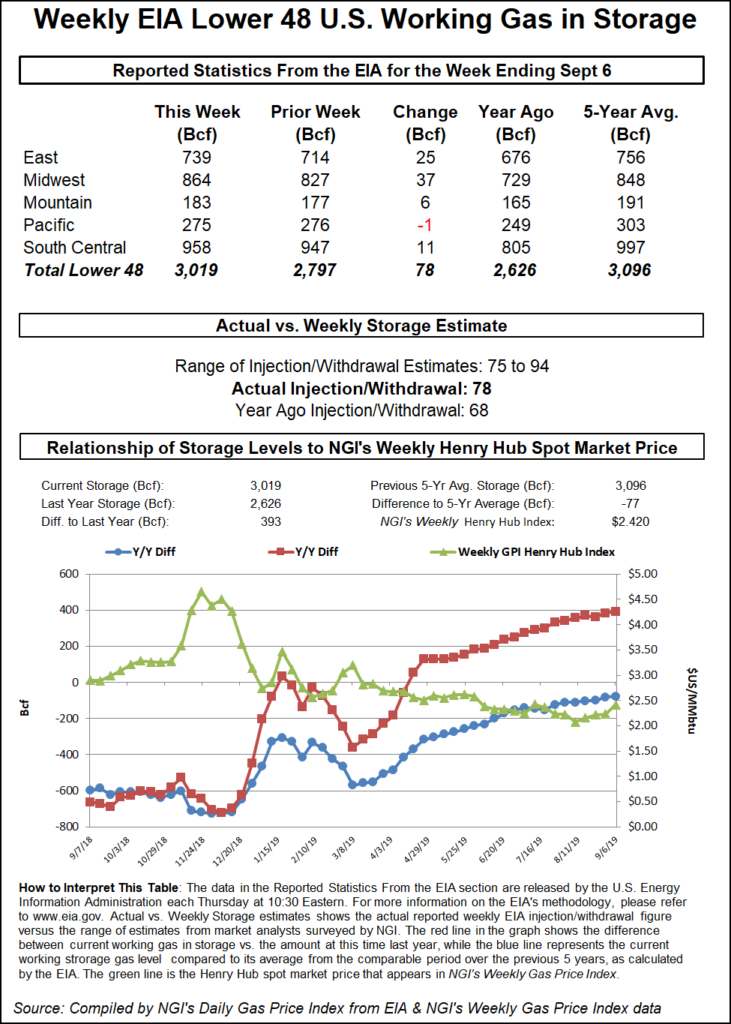 The Energy Information Administration (EIA) on Thursday reported a leaner-than-expected 78 Bcf build into U.S. natural gas stocks, injecting a little upward movement into a futures market that had sold off in recent sessions.

The 78 Bcf injection for the week ended Sept. 6 tops both the 68 Bcf build recorded for the year-ago period and the five-year average 73 Bcf injection. Predictions had ranged from around 75 Bcf up to 94 Bcf, with major surveys centering around 81-82 Bcf.

By region, EIA reported a 37 Bcf weekly build in the Midwest, with a 25 Bcf injection in the East. The Pacific withdrew 1 Bcf on the week, while 6 Bcf was refilled in the Mountain region. In the South Central, EIA recorded a net 2 Bcf injection into salt stocks for the week, with a 10 Bcf build in nonsalt.

Bespoke Weather Services viewed the 78 Bcf build as “basically neutral, as holiday weeks are always difficult, and it was still quite hot in key areas of the South last week.”

The outlook trended cooler overnight heading into Thursday’s trading, and given the potential for Friday’s forecasts to show additional cooler trends along the East Coast, “we don’t see much reason for prices to continue advancing higher from here…with risk, in our view, more skewed toward a move back near the $2.50 level,” Bespoke said. “…Demand will continue falling off after Sept. 20 to even lower levels, possibly allowing cash prices to weaken as well, as salts can more freely refill with less demand in place.”

After declines earlier this week, the technical picture has been “deteriorating” for natural gas, according to ICAP Technical Analysis analyst Brian LaRose, who was expecting “a period of sideways to lower price action” to close out the week.

Meanwhile, as of 2 p.m. ET Thursday, the National Hurricane Center (NHC) was continuing to monitor a disturbance in the Bahamas that it said had a 70% chance of cyclone formation over the next 48 hours.

“Satellite-derived winds and surface observations indicate that the disturbance…has not yet developed a closed circulation, and that the winds are not strong at this time,” the NHC said. “However, surface pressures remain low, and environmental conditions are favorable for a tropical depression or tropical storm to form within the next day or two as the system moves toward the northwest at 5-10 mph through the northwestern Bahamas and toward the Florida Peninsula.”

Maxar’s Weather Desk was calling for near- to below-normal temperatures for major cities along the Interstate 95 corridor for Friday, including highs in the mid-60s in Boston, and in the low 70s in New York City and Philadelphia.

Elsewhere, prices were generally steady from the Gulf Coast to the Southeast as hot temperatures were expected to persist across the southern United States.

A deal between the Mexican government and Fermaca, the developer behind the Wahalajara system, could prove “key to deconstraining” Permian Basin production and raising U.S. pipeline exports to Mexico, according to Genscape Inc. senior natural gas analyst Rick Margolin.

“The project was the last one under objection by the Mexican government in a dispute over tariff rates and force majeure payments agreed to by the previous Mexican presidential administration,” Margolin said. “Wahalajara may now resume construction and has said they expect the full system to be online by March 2020. This is one month later than our modeled in-service date.

Recent developments have signaled that north-to-south flows through British Columbia on Westcoast Energy are “returning to normal or near-normal” levels in time for the upcoming winter heating season, according to Genscape analyst Joe Bernardi.

A notice from Westcoast parent Enbridge Inc. Wednesday stated that the operator “continues to advance the return-to-service plan” for its T-South segment in the wake of an explosion last fall near Prince George, BC.

The company has been completing “detailed energy assessments on a segment-by-segment basis of the 36-inch pipeline,” Enbridge said. “To date, nine of these engineering assessments have received approval from the Canada Energy Regulator…Enbridge expects this will allow us to increase T-South system flows to 90-95% of firm capacity by Nov. 1.”

Flows through the T-South system “recently increased at the end of August as a planned month-long block of inspections was completed, bumping capacity up from around 900 MMcf/d to around 1,200 MMcf/d,” Bernardi said. “This put flows through the Station 4B South meter back within the neighborhood of the previous three-year average, rather than 400-500 MMcf/d below that average, as they had been for most of August.

“The anticipated further increases to 90-95% of capacity by Nov. 1 would represent another roughly 320-415 MMcf/d increase versus the current volumes.”

Restricted southbound flows on Westcoast were a key catalyst for record-setting price spikes at Northwest Sumas during an intense late-winter cold blast this past March.