September natural gas futures rocketed higher Thursday, buoyed by a shockingly tight government storage print and a rebound in liquefied natural gas (LNG) demand. The prompt month hit a $4.193/MMBtu intraday higher and went on to settle at $4.184, up 28.7 cents from Wednesday’s close. The October contract jumped 28.6 cents to $4.211. 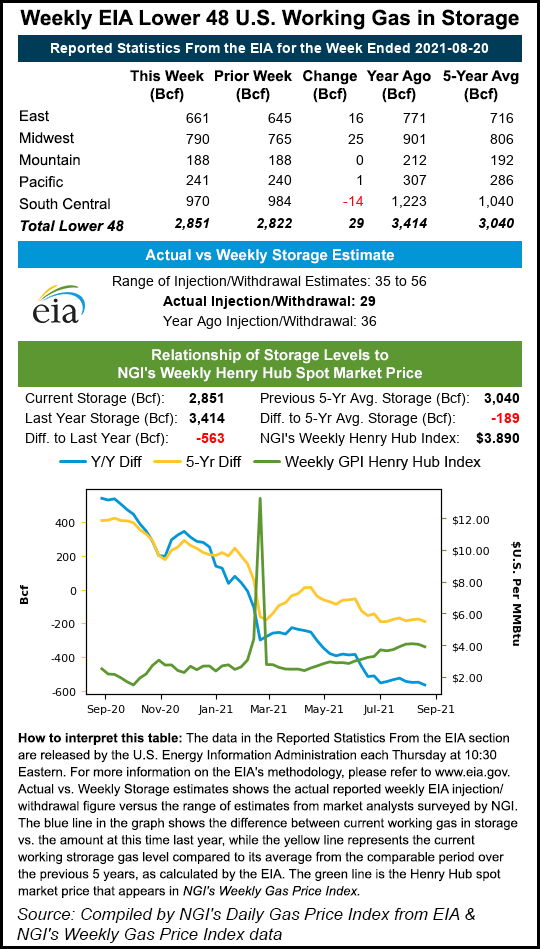 After two days of small day/day price changes, Thursday’s storage data set off some fireworks along the Nymex futures curve. The Energy Information Administration (EIA) reported a 29 Bcf injection for the week ending Aug. 20, surprising far to the downside of projections and sending futures to their highest settlement since December 2018.

Ahead of the EIA report, analysts expected a net weekly injection into U.S. stocks in the upper 30s to low 40s Bcf, according to surveys. Twelve injection estimates submitted to Bloomberg as of early Thursday ranged from 35 Bcf to 44 Bcf, with a median of 39 Bcf. A Reuters poll found a similar span of estimates and also landed at a median of 39 Bcf. A Wall Street Journal survey found estimates from 38-44 Bcf and an average of 41 Bcf. NGI estimated a build of 37 Bcf.

For comparison, the EIA recorded a 45 Bcf increase last year and a five-year average build of 44 Bcf.

Following the EIA report, Sharp and other market observers on The Desk’s online energy chat Enelyst discussed the surprisingly low inventory build. They attributed the miss to a substantial decline in wind generation. Notably, wind generation was one of the reasons for the smaller-than-expected injection in the prior reference period.

Bespoke Weather Services said the EIA’s 29 Bcf figure “reflects, once again, very tight supply/demand balances.” The firm had seen some risk of a lower number, but it struggled to explain the miss.

“Perhaps there was a small make-up for what was a strong outlier to the other side last week,” Bespoke analyst Brian Lovern said. “Obviously, if Thursday’s number were to be truly representative, the sky is the limit for prices. But, we suspect next week’s number is back somewhat looser, though nothing like the balances reflected in last week’s 42 bcf build.”

Broken down by region, the South Central shocked with a steep 14 Bcf net decline in stocks, including a 15 Bcf drop in salt inventories and a 1 Bcf build in nonsalts, according to EIA. The Midwest added a plump 25 Bcf to storage, and the East added 16 Bcf. Pacific inventories were up by 1 Bcf, while Mountain stocks were unchanged.

“Any early cold this winter, and things are going to get wild,” Enelyst managing director Het Shah said.

Speaking of wild, storm activity is picking up in what to date has been a relatively quiet hurricane season for the United States. All eyes are on what late Thursday was deemed Tropical Depression Nine.

The National Hurricane Center (NHC) said the storm was tracking northwest near the Cayman Islands. On the forecast track, the center of the depression should pass near or over the Caymans Thursday night, then to the Isle of Youth and western Cuba Friday. By Friday night and into Saturday, the storm was forecast to move over the southeastern and central Gulf of Mexico (GOM). The system was expected to approach the northern Gulf coast on Sunday.

Steady strengthening is forecast for the next few days, with the depression likely to become Tropical Storm Ida late Thursday. It could be at hurricane strength by the time it nears western Cuba or when it is in the southeastern GOM, according to NHC. Additional strengthening is likely over the warm GOM waters and near major hurricane strength when it approaches the northern Gulf Coast.

Though the storm on the current track is forecast to miss the Sabine Pass and Cameron LNG facilities, there was some concern of local flooding at natural gas processing facilities. There’s also the risk that the storm may change direction before it comes ashore.

On Thursday, LNG feed gas volumes were back near 11 Bcf, up from around 10.4 Bcf on Wednesday.

Meanwhile, Lovern noted that the latest Global Forecast System model showed another hurricane entering the GOM at the end of next week. “Another monster modeled next Sunday…heading right into LNG land. Obviously could be bogus at that range, but what a wild model run.”

Relief On The Way

Spot gas prices continued to rise as forecasts called for one more day of widespread heat across the country. AccuWeather said daytime highs would remain in the upper 80s to lower 90s on Friday, with high humidity making temperatures feel closer to 100.

The sweltering conditions boosted California spot gas prices by as much as 49.5 cents at SoCal Citygate, which averaged $7.230. In the Rockies, Northwest Wyoming Pool was up 22.5 cents to $4.025.

Some of the gains experienced out West and in the Permian stemmed from planned maintenance along the El Paso Natural Gas Pipeline. The pipeline on Thursday reduced capacity at several locations on Line 2000, including a reduction at CORNL2K to zero. This would result in a cut of 229 MMcf/d, according to Wood Mackenzie.

The firm noted that CORNL2K has already been reduced from flows of around 569 MMcf/d to flows of about 229 MMcf/d since an explosion near Coolidge, AZ earlier this month.

“CORNL2K is a constraint point in Hudspeth, TX, for gas flowing from West Texas to the Desert Southwest,” said Wood Mackenzie analyst Kara Ozgen. “As a result, the full reduction in capacity at CORNL2K will also likely reduce flows at EHRENBRG in La Paz, AZ.”

Southern California Gas Co. has warned customers that supply may be further restricted at the Ehrenberg System receipt point. The pipeline has not indicated when repairs would be completed.

Most other Appalachia market hubs started to decline ahead of an expected cooldown. AccuWeather said high temperatures were forecast to take a bit of a hit, especially in New England and northeastern New York, where highs are forecast to trend downward to the 70s and even the upper 60s.

Some of the best weather this weekend in terms of low-humidity, sunshine and fall-like conditions could be in Maine, closer to the source of the cool and dry air from Eastern Canada. High temperatures in Bangor, ME, were forecast to trend from near 90 on Thursday to the lower 70s on Saturday and the mid-60s on Sunday. High temperatures at that level are more typical of late-September, AccuWeather said.

“Farther to the south and west, the high temperature trend may only be 5-10 degrees lower from the extremes of much of this week,” according to the forecaster. “By Sunday, highs are forecast to range from the middle 80s in Pittsburgh and Philadelphia to just shy of 90 in Washington, DC.”

NatGasWeather said what gives weather patterns a bearish lean after this weekend is the fact both the GFS and European models favor the 16- to 20-day period to remain comfortable over most of the United States. Daytime temperatures are forecast in the 60s to 80s “for light demand and much larger weekly builds.”