After dropping to four-year lows this week, natural gas futures rebounded modestly Wednesday amid little change in the weather outlook. The February Nymex contract inched 1.0 cent higher to settle at $1.905/MMBtu after trading as high as $1.942. March settled at $1.900, up 1.1 cents. 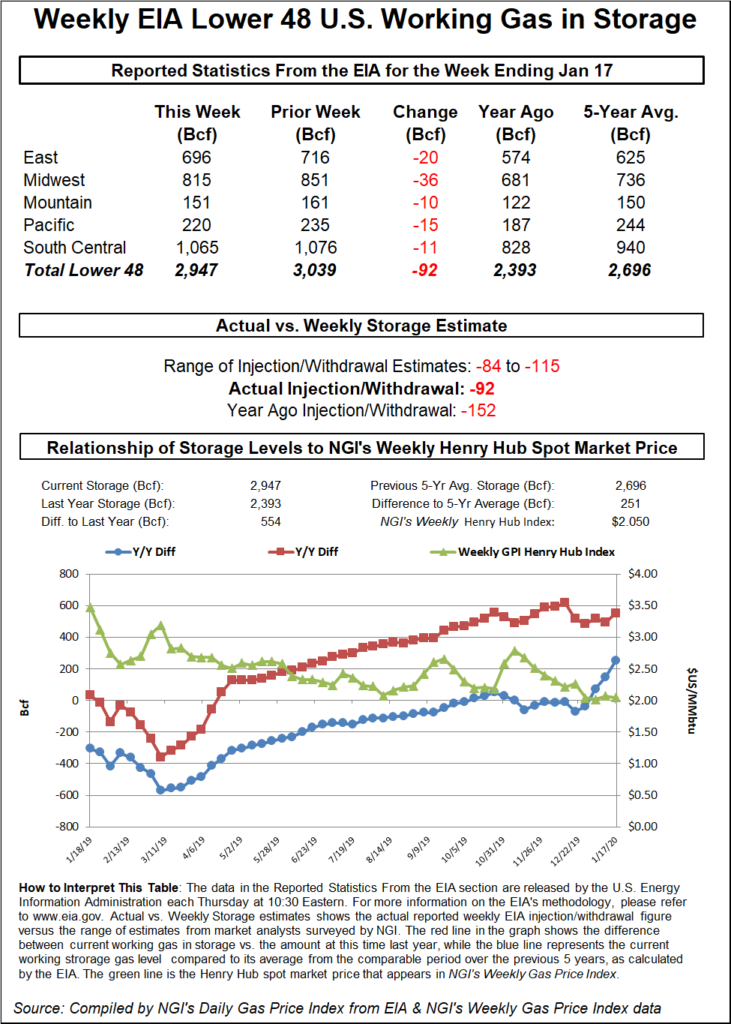 As a group, speculators are about as net short on natural gas as they’ve ever been, according to INTL FCStone Financial Inc. Senior Vice President Tom Saal.

“The way I calculate it, it’s the largest net short since 2006,” Saal told NGI, noting that 2006 is as far back as his dataset goes. “As far as getting more short, that’s the $64,000 question. Can the speculators get more short? And the answer is, of course they can. To get more net short, I would think you’d need more money, more new shorts” entering the market.

Saal said he was “surprised” by the “aggressive selling” that has seen the February contract drop from above $2.20 as recently as last week to now down well below the $2 mark. This move lower occurred with “pretty good volume,” he said. As for Wednesday’s price action, “it didn’t look like any new selling coming into the market, and it didn’t look like any new buying either. I think people were trying to figure out what happened.”

The extent of the net short position for speculators raises the prospect of prices rallying on buying momentum from short-covering, according to Saal.

“What you have now is a situation where they may have unrealized gains,” he said. “That looks good on paper, but until you actually cash in the trade you haven’t made any money yet. So yeah, there’s some major league buying coming, and if it’s the speculators covering shorts, it’ll be motivated buyers.”

In terms of weather and fundamentals, Bespoke Weather Services said the data as of Wednesday afternoon showed no major day/day changes.

“One thing we have seen in a few model runs in the last 24 hours is a tendency toward a colder eastern U.S. trough after the first few days of February,” Bespoke said. “The problem we have with this is the same issue we have noted for a long time now — that being a high latitude pattern that is not favorable for cold, as it is typically more difficult to get colder troughs into the East with this setup.”

The lack of cold in the outlook has taken a major toll on demand expectations over the past week.

Meanwhile, estimates have been pointing to a lighter-than-average withdrawal for Thursday’s Energy Information Administration (EIA) storage report. A Bloomberg survey showed a median prediction for an 88 Bcf withdrawal, while a Reuters survey landed on a 91 Bcf pull. Predictions ranged from minus 84 Bcf to minus 115 Bcf.

On the supply side, the firm estimated a 0.7 Bcf/d week/week drop in production.

A number of East Coast hubs recorded heavy discounts for a second straight session Wednesday as the frigid temperatures that opened the work week exited the region.

A day earlier, the National Weather Service (NWS) in Miami had warned that overnight temperatures would drop into the 30s and 40s, chilly enough to have Florida’s iguana population “falling from the trees.”

However, as of Wednesday the forecast for Florida, and for the rest of the country, was shaping up to be more comfortable in the days ahead, for humans and iguanas alike.

“Temperatures over the contiguous United States will generally be near to above average over the next couple of days,” the NWS said. “Cooler spots are forecast to be in portions of the Lower/Middle Mississippi Valley and into the Southeast on Thursday, but minimum temperatures should be at or above average most everywhere by Friday morning.”

These moderate temperatures were expected even as a weather system tracks through the central United States Wednesday “with rain and snow, then into the East Thursday through Saturday,” according to the forecaster.

Over the weekend, Algonquin Gas Transmission (AGT) lifted a force majeure declared earlier this month due to an unplanned outage at its Burrillville compressor station.

Maintenance planned for Wednesday and Thursday on the Columbia Gas Transmission (TCO) system in West Virginia could impact up to 903 MMcf/d flowing from TCO onto Columbia Gulf, according to Genscape analyst Anthony Ferrara.

“Then, Columbia Gulf will be performing planned pipeline stabilization work” from Friday through Feb. 29, “which could limit up to 822 MMcf/d of southbound flow in central Kentucky,” Ferrara said. “Both maintenance events would effectively reduce the amount of gas that can flow southbound from TCO onto Columbia Gulf.”

Elsewhere, Columbia Gulf declared a force majeure Tuesday due to an “unplanned mechanical failure” at the Delhi compressor in Richland Parish, LA, impacting capacity through its “AlexSEG” and “DelhiSEG” locations. The operator estimated the restriction would last about two weeks.

Genscape estimated that this maintenance event could limit up to 230 MMcf/d of southbound flows through Louisiana on the system.

Like much of the rest of the country, the already bargain-basement spot prices in Louisiana saw little movement Wednesday. Columbia Gulf Mainline added 2.0 cents to $1.820.