Following a 47.3-cent rally a day earlier, natural gas futures advanced a little further on Tuesday as weather forecasts, while mixed, favored solid demand ahead and Russia injected a fresh dose of uncertainty into the global supply picture. The December Nymex gas futures contract settled at $6.779/MMBtu, up three-tenths of a cent day/day. January rose a more convincing 18.3 cents to $7.406. 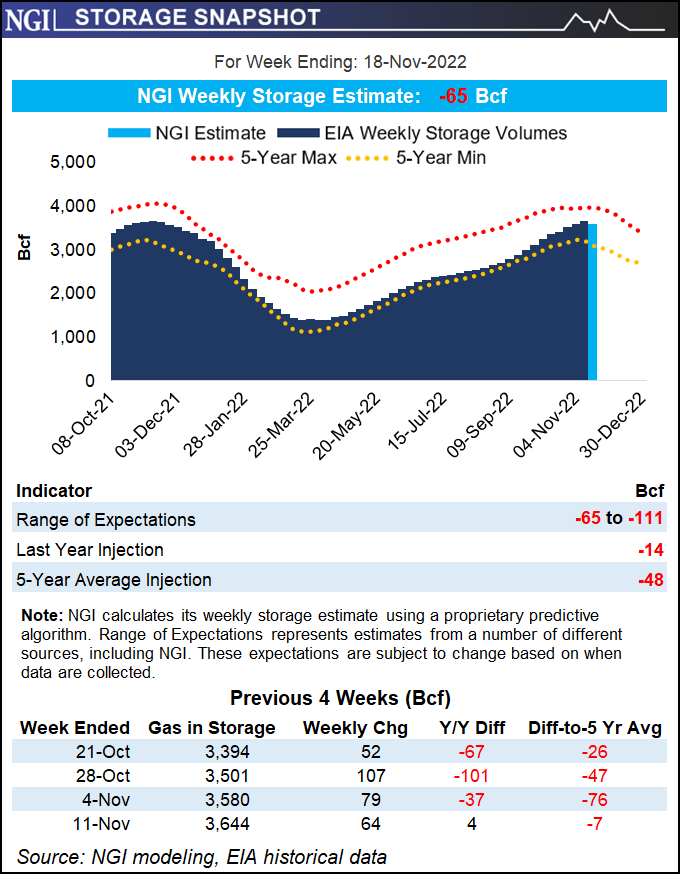 Still, there “will still be brief bouts of stronger demand across the Midwest and Northeast to start December” and “frigid air is expected into the West and northern Plains Nov. 29-Dec. 7,” the firm said.

Production, hindered last week amid fierce blasts of cold and wellhead freeze-offs, topped 100 Bcf/d Tuesday. That marked an increase of about 1 Bcf/d from the close of last week, according to Bloomberg’s estimates, though output remained below 2022 highs around 101 Bcf/d as winter neared.

The Freeport LNG export plant in Texas, forced offline in June following a fire, expects to begin bringing operations back online in mid-December. That is a month later than an earlier target, but the company said it could bolster LNG capacity next month by up to 2.0 Bcf/d.

The Freeport news comes as Europe is clamoring for U.S. exports. Countries across the continent have stored up healthy levels of gas for this winter. However, they are already endeavoring to secure more for coming heating seasons because Russia cut off most of its gas to Europe this year and threatened on Tuesday to scale back even more.

Russia’s Gazprom PJSC, which once supplied about 40% of Europe’s gas imports, has throttled that back to less than 10% since the Kremlin invaded Ukraine in February. It did so in retaliation of Western sanctions, according to European leaders and the International Energy Association.

Saying Ukraine was not delivering all of the natural gas it was sending through the country for consumers in Moldova, Gazprom warned this week if the imbalance continued it would start reducing gas supplies to a key interconnection, where Russian volumes enter Ukraine, on Monday (Nov. 28). Ukraine officials contradicted Gazprom’s claims.

Gazprom didn’t specify how much gas it could curtail or for how long. Still, a new and protracted reduction could send European prices higher, benefiting American exporters. This could weigh on U.S. supplies and push up domestic prices by extension, Marex North America LLC’s Steve Blair, senior account executive, told NGI.

The combination of further Russian cuts and Freeport’s December return, should they both materialize, “will take some gas out of the U.S. market” and boost winter prices, Blair said

The European Union’s executive arm on Tuesday outlined a formal plan to cap prices in exceptional circumstances. The proposal would need member countries’ approval, though, and it still would allow for the robust pricing fetched by American exporters in 2022.

Additionally, as RBN Energy LLC analyst Lindsay Schneider noted Tuesday, the “need for more LNG export capacity, driven both by Europe’s push to wean itself off Russian gas and long-term Asian demand growth, is resulting in a new wave of development. Two major U.S. projects have reached a positive final investment decision in the past six months and more are likely to do so soon.”

She also said U.S. companies have begun to explore the potential for floating LNG facilities, “which can bring new capacity online faster, much like the floating storage and regasification units that are now boosting European import capacity.”

News of a potential railroad strike that surfaced Monday and helped to launch the latest natural gas futures rally also continued to support prices Tuesday. Barring a labor agreement between management and unions by Dec. 8, a railway worker walkout could follow, a development that would disrupt coal deliveries.

The Schork Report’s analysts said a hit to coal would “generate increased demand for natural gas at the start of the heating season.”

This all developed as the U.S. Energy Information Administration (EIA) prepared to release its latest natural gas storage report on Wednesday – a day earlier than normal because of the Thanksgiving holiday on Thursday.

Estimates for the week ended Nov. 18 submitted to Reuters ranged from withdrawals of 65 Bcf to 111 Bcf, with a median decrease of 86 Bcf.

Next-day cash prices slipped at the national level on Tuesday, as demand began to ease modestly along with near-term forecasts for milder weather in parts of the Midwest and East.

Bolstered by seasonally strong demand and anticipated storage pulls in the West, however, prices in the Rockies and on the West Coast surged.

The National Weather Service (NWS) said following a cold start to this week, temperatures across most of the Lower 48 were expected to moderate by Thanksgiving and hang around for a few days.

By the end of this month, though, wintry weather systems were forecast to canvass much of the West, with lows ranging from the single digits to the 30s. These conditions could persist through the first week of December, with the potential to push into the East later next month.

Ahead of those systems, AccuWeather forecast the South-Central and Southeast areas of the Lower 48 could endure heavy rains and even possible snow beginning on Thanksgiving.

“As the storm strengthens, just enough cold air will be drawn in on its northwestern flank to produce a patch of heavy, accumulating snow in the Texas and Oklahoma panhandles,” with prolonged bouts of rain in the Southeast, AccuWeather meteorologists said.