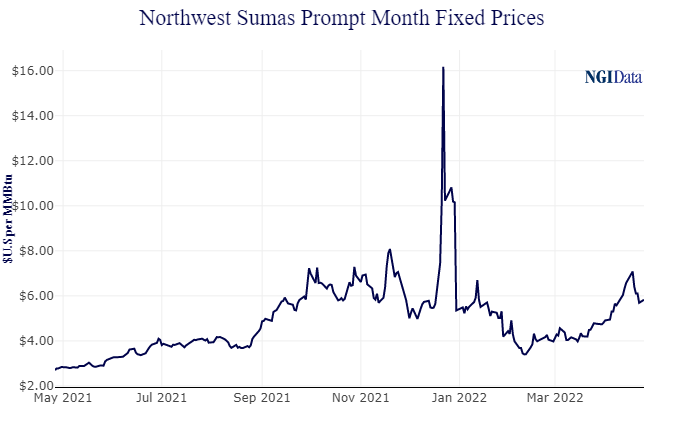 Coming off Monday’s hefty rebound, futures wasted no time surging even higher early Tuesday. The May contract opened the session at $6.836 and crossed the $7.000 mark before midday as production losses steepened in the Rockies. Output also declined elsewhere across the Lower 48 amid a host of seasonal maintenance activities.

Wood Mackenzie’s pipeline data showed Northeast volumes tumbling around 850 MMcf/d day/day, with losses in Northeast Pennsylvania on Tennessee Gas Pipeline (TGP) and Transcontinental Gas Pipeline Co. Although no maintenance events are associated with those decreases, the declines on TGP were along a string of dehydration plants east of Station 315, where there were operational restrictions for Tuesday’s gas day.

West Virginia production was down around 235 MMcf/d, according to Wood Mackenzie, amid maintenance on the Eastern Gas Transmission System and at the Hastings Extraction Plant. Texas Eastern Transmission Co. and Equitrans Midstream also have planned work that was impacting flows.

Elsewhere, Texas production dropped about 280 MMcfd, while Midcontinent output fell around 175 MMcf/d. Rockies volumes declined by around roughly 235 MMcf/d with continued issues in North Dakota because of the blizzard that hit the area over the weekend.

REX, meanwhile, began a one-day event Tuesday at the Julesburg Compressor Station for an emergency shut down test impacting flows through Seg 240. The event was in conjunction with one on Southern Star Central Gas PIpeline at the Cheyenne compressor, which was expected to last through Friday.

Bespoke Weather Services said the production drop combined with lower wind generation to tighten up balances again relative to last week. However, with stronger wind output expected by the end of the week, a timely return of production could quickly sap momentum in the market.

“Price action heading into May contract expiration the next couple of days is a tough call,” Bespoke said.

Over the next six weeks, though, EBW Analytics Group said the supply picture could see some improvement. It expects storage deficits to likely slide from three-year record highs amid “enormous” springtime injections that could average close to 100 Bcf/week.

By early June, however, the July contract will assume the front-month role as the gas market becomes increasingly sensitive to weather and prices increasingly volatile. There are “tremendous” risks in both directions, according to EBW.

“In a cool summer scenario, inventories may continue to build at a rapid clip, easing storage fears and potentially easing prices back below $5.00,” EBW senior analyst Eli Rubin said. “In a hot summer, however, Nymex futures could break through to reach double digits – suggesting the balance of price risks may lie to the upside.”

Rubin noted that as the April price spike aptly demonstrated, a rally “can catch fire and send prices sharply higher in a hurry.” Other analysts agreed.

Mobius Risk Group said the price trajectory over the next year depends largely on the pace of storage injections this summer and how cold the upcoming winter materializes. The firm pointed out that the Nymex winter strip (November-March) has lagged in recent trading sessions after hitting $7.913 on April 18. That said, the five-month strip started April below $6.000.

Calendar Year (CY) 2024 and 2025 strips, meanwhile, settled below $4.00 on Monday. Mobius advised that traders with short positions should protect exposure at this level, particularly if upside exposure is largely unprotected. Tuesday’s action, meanwhile, sent CY 2024 to a $4.032 average and CY 2025 to $3.892.

“It would stand to reason that two to three years would be more than ample time for producers to restart the growth machine that has often left the North American market awash in excess supply over the past decade,” Mobius said. “However, there are enough headwinds on the cost/labor/access to capital front for the exploration and production community” that consumers should be wary of “if they are expecting a reversion back to sub-$3.00 pricing.”

Spot gas prices moved higher Tuesday amid relatively strong demand that was seen continuing through the weekend. NatGasWeather noted that the latest weather models lost a couple of degree days for the coming seven days. However, a mix of chilly late-season weather systems were still expected to keep demand aloft across the northern and eastern United States.

Prices across the Southeast and into Louisiana were up between 20.0 and 40.0 cents day/day, while a few locations in the Midcontinent and Texas posted slightly stronger gains.

Wood Mackenzie said a unit outage at Westcoast’s compressor station 7 would add about 127 MMcf/d of capacity restrictions through Station 4B South. While this event would contribute to immediate cuts to flows at Station 4B South, the net operational capacity through the station is expected to fluctuate throughout the outage as sporadic maintenance activity is to continue into May. The largest cuts to flows through Station 4B South were expected this Friday and next Wednesday (May 4), with net operational capacity limited to 1,428 MMcf/d, according to Wood Mackenzie.

“Given the net operational capacity on April 29, this will likely be the lowest flow volume for April 2022,” Wood Mackenzie analyst Quinn Schulz said. “However, this would still be about 230 MMcf higher than the minimum flows through Station 4B South in April 2021. Additionally, average flows so far for this month are roughly 221 MMcf/d higher than the average flows for last April.”