With European natural gas prices continuing to sell off and U.S. fundamentals remaining firmly in bear territory following the government’s latest storage report, futures prices slid early. The November Nymex contract touched a $5.393/MMBtu intraday low but popped quite a bit given little change in the global backdrop, settling Thursday at $5.677, up two-tenths of a cent day/day. 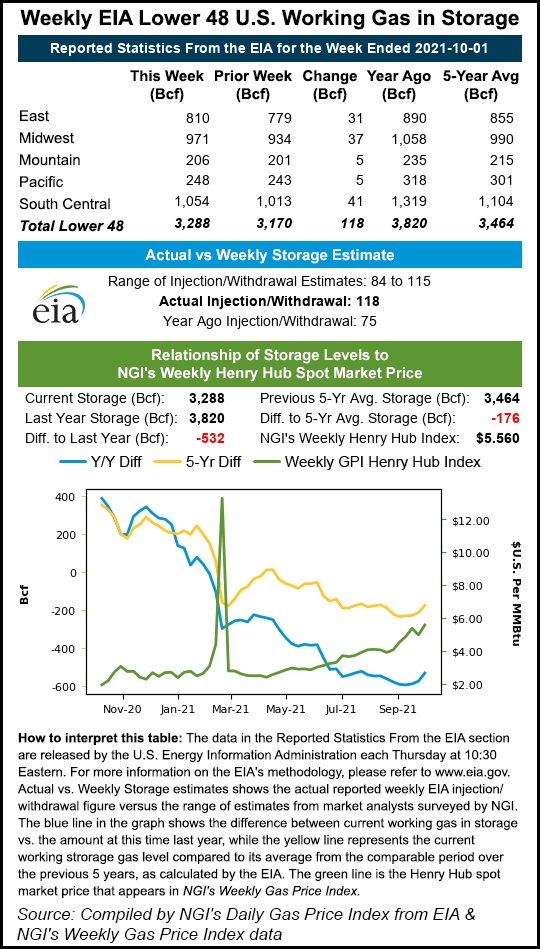 With pleasant fall weather expected to stick around for another few weeks at least — and storage inventories set to swell further because of it — there’s not a lot to get excited about in the domestic market. This was made clear on Thursday after the latest Energy Information Administration (EIA) data indicated that inventories are quickly closing the gap on the five-year average.

The EIA reported a stunning 118 Bcf injection for the week ending Oct. 1, coming in about 10 Bcf higher than market consensus and above even the highest estimate ahead of the report.

Projections in a Bloomberg survey ranged from builds of 101 Bcf up to 114 Bcf, with a median 105 Bcf injection. A Wall Street Journal poll included injections as low as 84 Bcf, but the average still landed at a stout 102 Bcf. Reuters’ poll was wider, with high-side estimates hitting 115 Bcf and the median injection coming in at 104 Bcf. NGI modeled a 114 Bcf injection.

For comparison, the EIA recorded a 75 Bcf injection in the same week last year, while the five-year average build is 81 Bcf.

The EIA’s 118 Bcf figure was the second in a row that surprised to the upside. Participants on The Desk’s online chat Enelyst attributed the hefty injection — the largest for the reference week in a decade — to strong wind generation that grabbed some market share from gas.

“For the week ending Oct. 8, it looks like wind is half of the past two weeks,” said Enelyst managing director Het Shah.

“We do see tightening in this week’s data, however, so our end-of-season estimate is below that level, for now,” Lovern said.

Mirroring comments by Shah, Lovern said the expected tightening appears mostly related to very low wind generation. However, winds are expected to reverse strongly into the weekend and early next week, “so we could loosen again as we see next week’s data.”

Broken down by region, the South Central region posted a plump 41 Bcf increase in storage inventories, including 21 Bcf in nonsalt facilities and 20 Bcf in salts, according to EIA. The Midwest added 37 Bcf to stocks, and the East added 31 Bcf. Inventories in the Mountain and Pacific regions each climbed by 5 Bcf.

Total working gas in storage as of Oct. 1 stood at 3,288 Bcf, which is still 532 Bcf below year-ago levels and 176 Bcf below the five-year average, EIA said.

Despite the clearly bearish storage data, prices bounced off lows not long after the EIA report was released. This could be because a strong injection figure was expected. It also could be because tighter conditions are expected next week.

However, traders also may have been hesitant to send prices much lower given the tight supply backdrop overseas and likelihood of robust export demand in the coming months.

“The setup is always exciting heading into the winter, but this winter is more interesting than most,” Wood Mackenzie senior gas analyst Eric Fell said on Enelyst.

Throughout the summer and into the fall, the potential for an energy shortage this winter has weighed heavily on Asian and European gas markets and, by extension, the U.S. market. Though feed gas volumes to U.S. terminals are well off recent highs because of maintenance, export demand is near its strongest levels ever as the two regions compete for supply ahead of colder weather. Furthermore, feed gas deliveries to U.S. terminals are set to rise year/year because of two new liquefaction facilities expected to begin service that would boost capacity to more than 12 Bcf/d.

Wood Mackenzie analyst Eric McGuire joined Fell on the Enelyst chat Thursday, noting that the market is in a unique place where the entire global market is tight. “This isn’t just in gas, but tight balances in the coal market are further stoking this price competition in Europe,” McGuire said.

Supply concerns have been brewing for months and yet, no real solution has been found, according to McGuire. “In other words, we aren’t seeing enough supply creation or demand destruction at these astronomical prices to balance the market.”

One possible solution may come from Russia. Though uneasy about its past reliance on Russian supply — and despite efforts to diversify its supply mix — Europe may start receiving additional gas from the country in the coming weeks and months. On Wednesday, Russian President Vladimir Putin indicated in a televised meeting that the country could export record volumes of gas to the continent this year.

Linepack has started on Nord Stream 2 (NS2), considered a critical link to move more gas from Russia to Europe. Still, regulatory hurdles remain, including a European Union requirement that ownership of transmission assets and natural gas supplies be separate. It could ultimately take months to certify that the system complies with the rule.

The 5.3 Bcf/d NS2 also faces political resistance. Rather than pushing to jumpstart commercial operations on the system at a time when the continent is short on gas, a group of European lawmakers in parliament this week pushed the bloc’s executive branch to make sure the pipeline fully complies with all applicable laws, citing concerns over energy security.

The news of a possible increase in supply sent European prices tumbling on Wednesday. On Thursday, Asian prices also joined in on the retreat.

Over the next week to 10 days, the most important fundamental drivers for all three major markets would likely be late-October weather forecasts and inventory data out of North America and Europe.

Although mild in the Lower 48, Europe has started to see cold move in, “exacerbating an already dire inventory situation,” according to Mobius.

“While early-winter weather has been chilly in Russia and lifted Russian demand, with topped-off storage, this incremental supply no longer needed for above-average injections may be redirected toward Europe,” the EBW team said.

Regardless, it’s barely October and the entire winter season has yet to play out. U.S. winter outlooks show a continuation of the above-average temperature pattern that occurred last winter. In that case, Fell said there is at least $2.00 of downside if we have a normal/mild winter.”

“However, there is $20-plus of upside based on current global prices in the coldest winter scenarios. All eyes are on weather and international prices.”

With temperatures neither too hot nor too cold, spot gas prices continued to come off recent highs.

Losses remained steep even after Wednesday’s sell-off, with the country’s midsection putting up losses of around 30 cents or so. Henry Hub cash dropped 26.0 cents to $5.690, and Southern Star tumbled 37.5 cents to $5.255.

Starting Friday and until Oct. 18, Tennessee Gas Pipeline (TGP) is scheduled to replace pipe at the Whiskey Chitto River Crossing in Louisiana. The event could reduce operational capacity at KNLINE in Allen down to zero, leading to a potential maximum cut of 235 MMcf/d. Wood Mackenzie pipeline flow data indicates that in the last 30 days, KNLINE averaged 180 MMcf/d and maxed at 235 MMcf/d.

TGP’s notice also states that ELIZ NG/TGP GRANT LA SALES ALLEN will be shut in during the maintenance, but this location has not flowed any gas for several months, according to analyst Kara Ozgen.

In the Midwest, Emerson was down a whopping 45.0 cents to $4.795, and in Texas, Waha came off 40.5 cents to $5.170.Similarly stout losses were seen on the East Coast, while some cooler weather moving into the Rockies tempered decreases at several locations there. Northwest Wyoming Pool slipped only 9.5 cents to $5.910.