U.S. natural gas prices retreated Monday after rallying the previous week in the wake of Russia’s invasion of Ukraine. Traders looked past soaring European gas and global oil prices to start and focused on the likelihood of waning domestic demand. 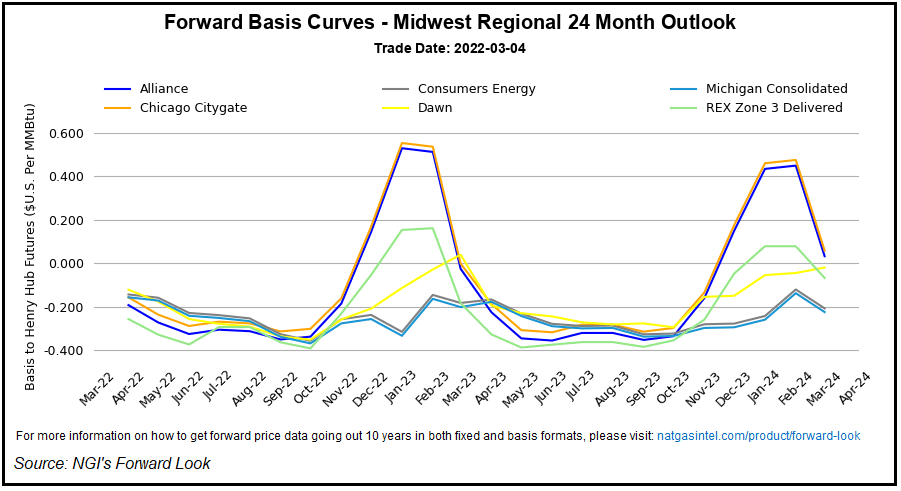 European natural prices surged to record levels to start the trading week and global crude prices followed suit. Benchmark gas futures in Europe touched $115 in early trading – more than three times the pre-war level — while Brent crude prices jumped beyond $120/bbl, up more than 50% from the start of the year. Mounting sanctions against Russia – including the potential for a U.S. ban on Russian oil imports – fueled widespread supply concerns, and the specter of an energy crisis permeated markets.

“The eye-watering risk premium suggests expectations that gas flows will potentially be disrupted by sanctions on Russian energy exports or damage to pipeline infrastructure, or simply a halt in flows from either side,” said Rystad Energy’s Kaushal Ramesh, senior analyst.

U.S. natural gas prices rallied on similar developments last week, topping the $5 threshold. But with shoulder season on the horizon and weather-driven demand likely to fade later in March, traders took profits and futures gave up some of the ground gained in recent sessions.

Key fundamentals supported the pullback. Production held even at just shy of 95 Bcf on Monday, while forecasts pointed to spring weather.

Amid the focus on the Ukraine crisis across the energy sector, the fundamental outlook for domestic natural gas had been “fading to the background,” according EBW Analytics Group senior analyst Eli Rubin.

Weather-driven demand, however, is set to recede notably after mid-March, which could weaken support for prices and allow “recent bullish momentum to slow or reverse,” Rubin said.

Still, he cautioned the war could once again influence U.S. prices, given deepening worries about global supply shortages. “Despite our bearish seasonal bent fundamentally…the most-likely near-term trajectory for natural gas may be higher,” Rubin said.

In terms of weather specifics, Bespoke Weather Services said Monday that the forecast trended warmer over the weekend, with milder adjustments for next week offsetting colder changes to the outlook for the current week.

The 15-day forecast remained colder-than-normal overall in terms of gas-weighted degree days, though conditions “skew a little warmer than normal beyond the middle of the month,” Bespoke said.

Looking ahead, however, Bespoke also cautioned that forecasts and underlying fundamentals for natural gas have taken on a diminished role given how events in Ukraine have permeated energy markets.

“We can write about the changes in weather, and the fundamentals data, which we will, but it will not serve much purpose in terms of assessing near-term price action in the natural gas market,” Bespoke said. “…Until there is some resolution in the Ukraine conflict, we seem likely to remain tied to directional moves in energy in general, be it European prices, oil, etc.

“Should there be any meaningful de-escalation, we feel certain there would be a solid move lower in all energy markets, but these things, of course, are unpredictable,” the firm added.

Spot gas prices posted solid gains across much of the Lower 48 on Monday, boosted by chilly conditions in parts of the Mountain West and the nation’s midsection.

Low temperatures early Monday hovered in the teens in Denver and Minneapolis, while Chicago and Detroit started the day with lows in the 20s.

NatGasWeather said that, early this week, weather systems packing colder-than-normal temperatures “will be sweeping across the Midwest and Ohio Valley with rain, snow and chilly lows” ranging from below zero to the 30s for regional strong demand.

“As cold air further advances into the southern and eastern U.S. as the week progresses, national demand will become strong, while continuing through the coming weekend as a reinforcing cold shot arrives,” the firm added.

Farther out, though, demand is expected to recede notably. For next week, NatGasWeather expects high pressure with warm highs of 50s to 70 over the southern United States. The comfortable conditions are to spread northward as the outlook progresses in the final third of the month, the firm said.

Cash prices climbed across Texas Monday, as chilly lows in the 30s in Dallas and other parts of the state to start the day fueled relatively strong regional demand.