After cresting the $6.000/MMBtu mark a day earlier – and then surging to a $6.394 intraday peak – natural gas futures ran out of steam Wednesday. Although there were plenty of factors for bulls to hang their hats on, technical momentum was zapped late in the session. The May Nymex gas futures contract settled at $6.029, off three-tenths of a cent from Tuesday’s close. June futures budged even less, finishing nearly unchanged at $6.107. 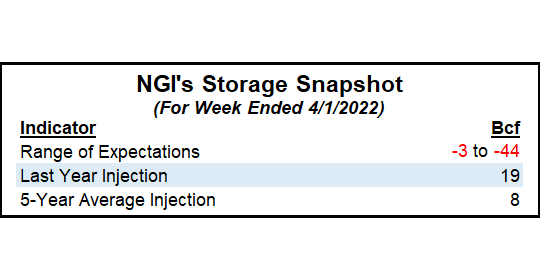 As for futures, bulls appeared destined to keep their streak of price gains going midweek. May Nymex futures were up nearly 35.0 cents early in Wednesday’s session. That level sparked a wave of selling in the market in spite of several supportive drivers.

“We saw rejection at that level, at least for now, with prices pulling all the way back to almost dead-on” with Tuesday’s settlement, said Bespoke Weather Services. “We are still seeing supply/demand balances having loosened over the last couple of weeks, but it remains clear that the market does not put much stock in this.”

With May natural gas sitting near $6.000, gone are the days of the shoulder-season doldrums that pushed prices below $3.000 last year and under $2.000 in 2020. Among the myriad factors influencing the market, weather continued to flex its muscles. Bespoke said models cooled a little further for the period after mid-April, with a trough coming out of the West and cooling the Midwest and East. The firm expects the chilly blast to be brief, “but it keeps alive the theme of variability.”

That said, the 15-day outlook remained slightly warmer than normal overall, according to Bespoke. Meanwhile, “the La Niña state remains intact, which we suspect ultimately leads to a hotter summer this year, compared to 2021,” Bespoke said.

Mobius Risk Group noted the lingering cool weather and its impact on demand. However, the recent price rally, it said, was more likely tied to festering concerns about storage.

Although the gas market saw the first injection into inventories arrive a week early, the next government inventory report is likely to reflect another withdrawal. Estimates ahead of Thursday’s Energy Information Administration (EIA) report are pointing to a draw in the high 20 Bcf range.

A Bloomberg survey of seven analysts showed withdrawal estimates from 17 Bcf to 36 Bcf, with a median draw of 27 Bcf. Reuters polled 15 analysts, whose estimates ranged from withdrawals of 3 Bcf to 44 Bcf, with a median decline of 26 Bcf. A tighter range of projections in a Wall Street Journal poll averaged at a pull of 28 Bcf.

Last year, 19 Bcf was injected into storage during the similar week, while the five-year average is a build of 8 Bcf.

Total working gas in storage as of March 25 stood at 1,415 Bcf, which is 347 Bcf below year-ago levels and 244 Bcf below the five-year average, according to EIA.

“Until there is clear evidence of production growth, bounds on the upside are somewhat unconstrained without Mother Nature stepping in and providing relief for market participants with short interest,” Mobius said.

Bespoke agreed. Without additional gains in production, the gas market is likely to continue running higher, it said. “There is plenty of room to run if we break above the $6.50 level, and the market continues to worry that there is any appreciable risk of having to price out liquefied natural gas later this year.”

Bespoke noted that liquefied natural gas (LNG) maintenance this spring would keep volumes suppressed somewhat for a couple of weeks. However, this would likely need to coincide with more production gains “in order to give sellers any confidence in stepping in front of what has been a freight train of bullishness, recently.

“One must be nimble, however, as a sudden jump in production could lead to a quick, large selloff,” the firm added. “This is the nature of what will likely be another summer/fall with large volatility.”

“Overall, with the risk of a delayed ramp-up in volumes through the year alongside robust demand, we see continued potential upside pressure for pricing as limited demand destruction appears on tap in the present gap above historical pricing levels,” TPH analysts said. “…The U.S. remains at the low-end of various global cost curves, with increasing potential for additional LNG exports presenting support” for balances in 2023 and beyond.

At the same time, the outlook for U.S. and global natural gas pricing continues to be skewed to the upside – even at $6.000, according to TPH. In addition to the late-season weather demand additions thanks to the cooler weather models, recent trends in power generation have remained above historical levels.

This is because of modestly higher total generation, which is tracking around 3% higher year/year along with a seasonal lull/limited capabilities in coal generation because of a lack of inventories ahead of the summer ramp-up. Notably, power demand also has remained robust in spite of year/year gains in solar (30% higher year/year in March), wind (10%) and hydro (15%), TPH said.

Spot gas prices continued to charge higher Wednesday amid early season heat in the southern United States and chilly weather in the Midwest that is expected to head East.

West Coast prices continued to strengthen as well, with Kingsgate moving up 31.0 cents to $5.615.

The gains occurred in response to upstream maintenance at Nova Gas Transmission Ltd.’s Burton Creek A3 compressor, which was cutting flows heading for the Pacific Northwest. Wood Mackenzie analyst Quinn Schulz said operational capacity for the Alberta/British Columbia (BC) export point would be limited to 2.612 Bcf/d until Thursday.

This is instead of the cut to 2.471 Bcf/d that would have resulted from a planned maintenance on Foothills BC’s system. That work was canceled on Monday because of unsafe access to the pipe caused by rain and rapid spring melt, Schulz said.

The Burton Creek compressor is near the Alberta/BC border and is the last compressor flowing gas southbound onto Foothills BC for export into the United States.