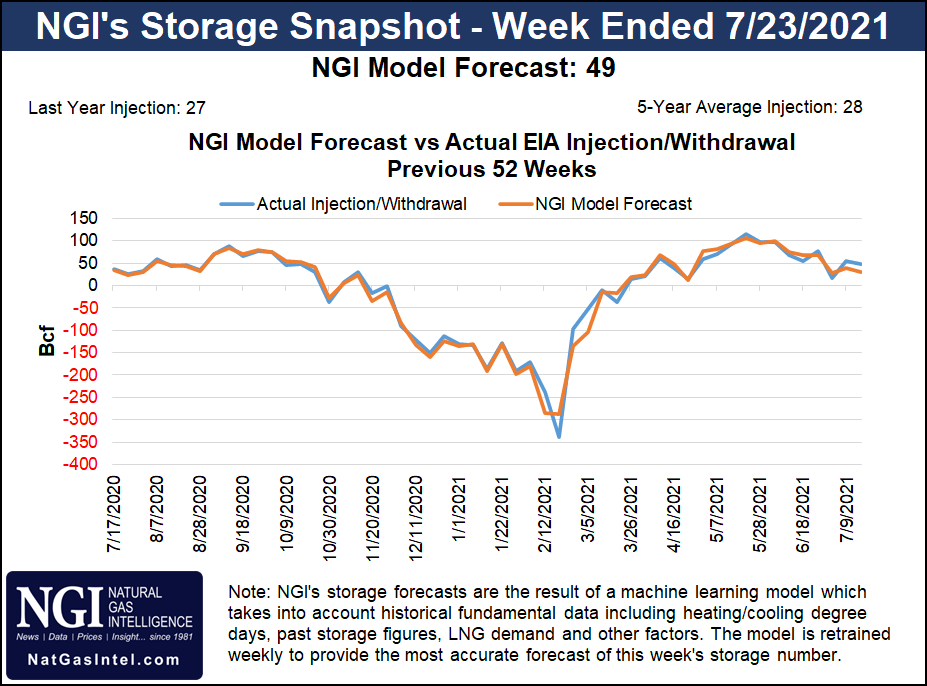 NGI’s Spot Gas National Avg. also bounced back from a loss the day earlier and advanced 3.5 cents to $3.930 on Tuesday

August rolled off the books as the prompt month at Wednesday’s close. It posted gains on eight of its final nine days, and at multiple points it eclipsed the $4.00 threshold and reached highs last seen in 2018.

In that span, Tuesday was the only day in which the August contract declined. Analysts attributed the blip to profit-taking, customary volatility ahead of expiration and forecast changes that showed cooler weather ahead — temporarily.

NatGasWeather noted that heat is still expected to taper some in coming days. “National demand will be much lighter this weekend and next week as a series of weather systems over Canada advance aggressively across the eastern half of the U.S. with comfortable highs of 70s to mid-80s,” the firm said.

However, the forecaster also noted Wednesday, projections show heat intensifying August 6-11 as most of the Lower 48 “warms back above normal with highs of mid-80s to 100s for a return to strong national demand.”

At the same time, levels of U.S. liquefied natural gas (LNG) exports are holding strong this week just shy of 11 Bcf/d – a  level near all-time highs. LNG exports to fuel cooling needs in Asia and Europe are soaking up supply and feeding imbalance worries. Estimates this week showed production around 91 Bcf, below recent highs and well below levels prior to the pandemic. The divergence between demand and output has provided price support for futures.

“We’re still in summer, exports are strong and production is pretty low,” Marex North America LLC’s Steve Blair, a senior account executive, told NGI. “For what we are seeing, I think there’s a bullish undercurrent to this market that could last through the summer.”

The market is expected to focus next on the U.S. Energy Information Administration (EIA) inventory report on Thursday. It will cover the week ended July 23. Estimates as of Wednesday showed analysts expecting an injection into storage in the low 40s Bcf.

A Wall Street Journal survey produced estimates from 39 Bcf to 47 Bcf and an average of 43 Bcf.

NGI is modeling a 49 Bcf injection.

The median expectations of polls would lift gas in storage to about 2.720 Tcf, 6% below the five-year average and 16% below the similar week a year earlier.

The deficits, combined with ongoing demand, fuel the imbalance concerns. “The big picture still looks bullish” for futures “and could be aided by any hotter weather shift,” Bespoke Weather Services said. “We say it over and over again, but until production can get to 2021 highs, it is difficult to see enough loosening in supply/demand balances to make the market more comfortable with the storage situation.”

Energy Aspects issued a preliminary estimate for a 38 Bcf injection. The firm modeled average power demand of 39 Bcf/d for the period, enough to drive a “step down in injections.”

“The market is searching for a price that will back off sufficient power sector demand or entice enough price-elastic supply to come down the pipe,” Energy Aspects said of the recently soaring natural gas prices. “With gas retaining a 60% share” of thermal generation, “prices at $3.70 were not high enough to back off sufficient power burn to give the market greater ease heading into the heating season.”

EIA is scheduled to release its storage data at 10:30 a.m. ET Thursday.

Spot gas prices regained momentum Wednesday amid an ongoing heat wave in the West. Prices soared across the Southwest and California to lead the national average higher.

Temperatures climbed well above 100 in Nevada and Arizona as well as the deserts of California, where severe drought conditions amplify the intensity of heat.

“Weather like this will always be an overriding factor,” Blair said.

Elsewhere, prices were mixed, with hubs in the Northeast leading declines. Algonquin Citygate near Boston shed 28.0 cents to $3.040.

NatGasWeather said overall demand would remain “quite strong the next couple days as hot upper high pressure rules most of the U.S., with highs of 90s to 100s,” with the Upper Great Lakes and New England as exceptions.

Wood Mackenzie analyst Colette Breshears noted that, for Thursday, heat advisories were issued across several central states, from Minnesota to Montana. The West Coast, meanwhile, “is in for another few days of triple-digits, with persistent 100-plus maxes into the weekend.”